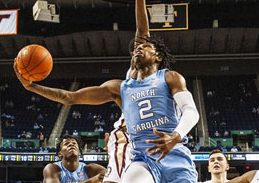 North Carolina led 29-27 at the half but shot 58% after the break to turn the game into a surprising rout.

Dawson Garcia added 14 points while Armando Bacot had 11 points and 14 rebounds. More important, Bacot was fouled twice in a span of 12 seconds by Michigan’s top big man, Hunter Dickinson, early in the second half.

That sent Dickinson to the bench for the next 10-plus minutes with four fouls. The Tar Heels (5-2) pounced to take advantage, while the Wolverines (4-3) got nothing going in response and trailed by as many as 25 points.

Michigan shot 9 of 27 (33%) after halftime as UNC started stretching out the lead, pushing the margin to double figures and then getting back-to-back 3s from Love to make it 59-40 with 6:49 left.

Freshman Moussa Diabite scored 13 points to lead Michigan, while Eli Brooks added 11 points. The 7-foot-1 Dickinson, who entered as the team’s No. 2 scorer (14.8 points) and top rebounder (8.2), finished with four points and five rebounds in 18 minutes.

Michigan: The Wolverines had a preseason No. 6 ranking in the AP Top 25 and spent a week at No. 4 before a two-point home loss to Seton Hall and an 18-point loss to Arizona in Las Vegas. This was another ugly one for Juwan Howard’s team, which struggled for second-half stops and kept turning the ball over — several leading to pace-pushing transition chances — and never found a consistent rhythm even before the Tar Heels made their move.

UNC: The Tar Heels opened at No. 19 for their first season under Hubert Davis, but fell out after of the poll after losses to ranked opponents, first against now-No. 2 Purdue and then against No. 13 Tennessee a day later in the Hall of Fame Tip-Off in Uncasville, Connecticut. They could be set to hop right back into the Top 25 after securing Davis his first win against a ranked opponent.