Shooting stars: Pickett, Hartman likely to air it out in ACC title game 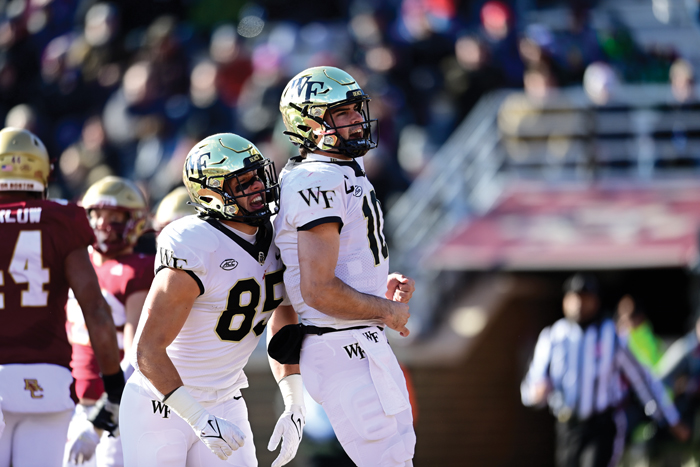 Wake Forest’s Sam Hartman, right, and one of his targets, tight end Blake Whiteheart, will look for ways to slice through the Pitt defense. (File photo by Billie Weiss/Wake Forest University Athletics)

PITTSBURGH — Kenny Pickett didn’t get specific. He didn’t need to. The goal the Pittsburgh quarterback set for himself when he made the surprising decision to return in 2021 rather than enter the NFL draft covered all the bases.

“I want to be the best,” said Pickett, who was named the ACC’s Most Valuable Player on Wednesday. “That’s always been my goal since I was young. And it’s something that, you know, you continue to work for.”

A goal that’s come tantalizingly close for Pickett over the last three months. All he’s done since September is rewrite a majority of the school’s record book — surpassing the likes of Hall of Famer Dan Marino in the process — while leading the 17th-ranked Panthers (10-2) to their second appearance in the ACC title game and mounting a Heisman Trophy campaign that’s morphed from unlikely to dark horse to legit.

Yet he won’t be the only quarterback whose name is on the Heisman ballot when the teams take the field Saturday night in Charlotte.

“I think (Pickett) and Sam are very similar,” Wake Forest coach Dave Clawson said. “That’s your first- and second-team all-ACC quarterbacks. You have two guys that are competitors, that play with courage, that make plays with their feet and have great arm strength and can make every throw.”

Pickett and Hartman connected during visits to the offseason passing camp run by Hall of Famer Peyton Manning. Maybe it’s not a coincidence that both players — and their teams — took a massive leap forward in 2021 as a result.

Pickett ranks fifth in the country in yards passing (4,077) while Hartman is ninth (3,711). Pickett’s 40 touchdown passes are second in the nation, just a few spots ahead of Hartman’s 34.

Hartman has run for 10 touchdowns while Pickett has managed four on the ground, a dip from previous years, partly out of a conscious effort by Pickett to avoid unnecessary hits and partly because he’s got so many weapons around him that he no longer needs to make something out of nothing with his feet.

What makes their ascensions so startling is the relative anonymity in which they toiled before this fall. Pickett threw for 39 touchdowns over his first four seasons, a number he surpassed in 12 games in 2021, the 40th coming in a 31-14 victory over Syracuse last Saturday that assured Pitt of its first 10-win regular season in four decades.

Hartman’s numbers have similarly spiked thanks in large part to his deft decision-making in running Wake Forest’s run/pass option-heavy offense and a dash of maturity. Clawson pointed to a comeback over Louisville in October as proof.

“He threw a really bad pick in the fourth quarter,” Clawson said. “And I think in years past, I don’t know if he or we could have come back from that. And his reaction to the pick was great: ‘Coach, I’m fine, don’t worry about it, we’re good.’”

It’s the same kind of mental toughness that’s defined Pickett’s season and career. Pitt’s defense, while aggressive, occasionally is a bit of a mess. The player who spent years trying to shed the habit of aiming to be “Kenny Perfect” has at times been forced to be just that.

He’s largely come through, even when the Panthers have not. Pickett threw for six touchdowns in a mystifying home upset at the hands of Western Michigan in September and passed for a school-record 519 yards in a loss to Miami, a game in which the Panthers trailed by two touchdowns 10 minutes in and spent the next 50 scrambling to keep up.

In previous years, one setback might have snowballed into two or more. Not this year. Pickett’s grit simply didn’t allow it to happen. His brilliance, too — a brilliance Pitt coach Pat Narduzzi saw over the summer when Pickett made the first-string defense look as if it was running in mud.

Defensive end Calijah Kancey’s cleats were covered in it, proverbially anyway. Kancey spent a significant portion of training camp trying — and failing — to chase down Pickett. He knew then he was watching something special.

“I called it out before anybody seen it,” Kancey said. “I was telling him he’s the best quarterback in the nation. There were times Kenny played at an elite level in practice and I’m like, ‘He’s going to be a great quarterback.’”

A quarterback who is intent on putting the team ahead of himself. Literally. Pickett is part of the leadership group that opted to have the word “TEAM” put in all capital letters on the back of the practice jerseys. He never misses a chance to say he has hardly put together this remarkable season alone.

Yes, the attention is nice. It’s also beside the point. He came back to get better but more specifically, he came back win. And win big.

“All the individual accolades come to the best team,” Pickett said. “You see all those guys we have on those different (All-ACC) teams and we’re in the championship game. It doesn’t happen by accident.”