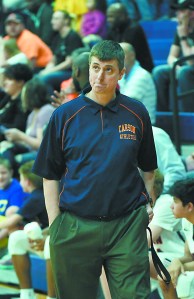 CHINA GROVE — Carson’s active roster has been reduced by the old-fashioned flu bug as well as COVID protocols.

Emory Taylor and Mikey Beasley were the most obvious omissions from Carson’s scorebook on Wednesday.

Even if the Cougars had everyone it would have been an uphill fight against 4A West Cabarrus.

The Wolverines (1-2) were hungry for their first win after an overtime loss to Butler.

They got 14 points from Trey Minard and mauled the Cougars 71-39 in the first meeting of the programs.

Cameron Burleyson careered — and then some — with 19 points, accounting for almost half of the Cougars’ production. Jay Howard added nine points.

West Cabarrus had things under control at halftime, leading 38-18.

Carson (0-3) is home against Statesville on Friday.