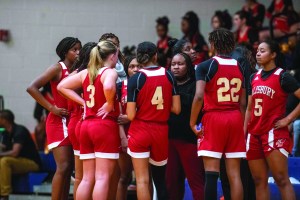 Salisbury head coach Lakai Brice talks to the team during a timeout at Carson. JON C LAKEY/FOR THE SALISBURY POST.

The Hornets had their best outing so far, blowing out 4A Northwest Guilford (1-1) in the third quarter and cruising to a 55-24 road victory.

“We played much better defense and that translated into great offense,” Salisbury head coach Lakai Brice said. “We moved the ball much better.”

Salisbury took a 26-15 lead to the break and outscored the home team 19-4 in the third quarter.

“We were able to give everyone plenty of rest,” Brice said. “That was good. We’ve got another big game on Friday (at West Rowan).

Kyla Bryant is still dealing with a wrist sprain and Northwest Guilford’s defense was focused on containing her, but the junior guard scored 15 to lead the Hornets (3-1).

Rachel McCullough turned in a terrific all-round game and scored 12 points. The senior boosted her career total to 856. She’s 19th on the program’s all-time scoring list. She’s one point behind Ashia Holmes (Class of 2011) and 10 behind Kwameshia Hicks (Class of 2008).

Kiki Walker, a transfer from Pennyslvania, is a long, rangy guard. She flashed some potential with nine slashing points.

It was a strong step forward, but Brice acknowledged the Hornets, who have held two quality opponents under 30, have a lot of work to do.

“We missed a ton of layups and free throws, so there’s plenty to work on,” she said.