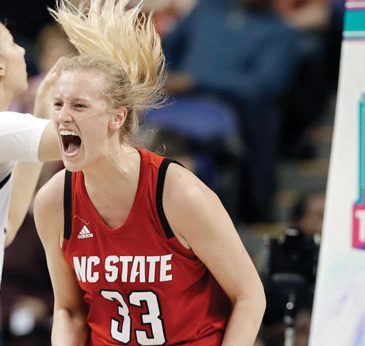 BLOOMINGTON, Ind. (AP) — Reserve Diamond Johnson scored 19 points, and No. 2 North Carolina State used an 11-2 run late in the fourth quarter to pull away for a 66-58 win over No. 6 Indiana on Thursday night in the Big Ten/ACC Challenge.

Kayla Jones scored 17 points, Raina Perez had 13 and star center Elissa Cunane battled through foul trouble to score 11 for the Wolfpack (7-1), who haven’t lost since a season-opening defeat to No. 1 South Carolina.

Mackenzie Holmes scored 24 points and Ali Patberg had 10 for the Hoosiers (5-2), whose only two losses have come against teams ranked in the top 10. Indiana also came up short against Stanford.

The Hoosiers led 23-21 at halftime and kept it close throughout, moving within 48-47 on Aleksa Gulbe’s 3-pointer with 3:44 remaining. But Jones responded with a 3 to start N.C. State’s decisive run, and the Wolfpack extended their lead to 59-49 on Perez’s two free throws with 53 seconds left.

“It felt like we had every chance to win this game tonight,” Indiana coach Teri Moren said. “Unfortunately we just didn’t hit enough shots.”

The teams combined for 35 fouls, and Cunane fouled out late.

“We were in a lot of foul trouble and had to adjust a little bit,” Moore said. “Second half, maybe we did a little better job of it. But it was tough.”

N.C. State: The Wolfpack defeated their second top-10 opponent of the season. They beat No. 8 Maryland in the Bahamas on Thanksgiving.

Indiana: The Hoosiers led at halftime despite shooting 23% from 3-point range, but ultimately their offensive struggles were too much to overcome.

N.C. State finished 14 of 17 from the free-throw line despite not attempting a free throw in the first half. The Wolfpack were 13 of 15 from the line in the fourth quarter, including 9 of 10 in the final minute.

N.C. State further solidified its place as the No. 2 team behind South Carolina.

Indiana: Hosts Penn State on Monday in its first Big Ten game of the season.

DURHAM (AP) — Freshman Shayeann Day-Wilson scored 19 points to help Duke beat No. 9 Iowa 79-64 on Wednesday night in the Hawkeyes’ return from a COVID-19 pause that led to the cancellation of three games.

Celeste Taylor added 17 points and 13 rebounds for the Blue Devils, who didn’t trail after midway through the first quarter in this Big Ten/ACC Challenge matchup. Duke shot 44% and won despite shooting 6 of 21 from 3-point range, but controlled the glass for a 45-35 advantage with a physical edge inside.

Duke (7-0) led by eight at halftime then held Iowa to 1-of-12 shooting out of the break to push that margin to 18 points, securing the first win for second-year coach Kara Lawson against a ranked opponent.

Star guard Caitlin Clark scored 22 points for the Hawkeyes (4-1), with most of her production coming on a brutal shooting night after Duke had built its big lead. Monika Czinano had 21 points while providing a reliable post presence, but Iowa’s outside shooters offered little balance by missing 16 of 19 3-pointers.

Clark, a preseason Associated Press All-American who entered averaging 21.5 points, shot 9 of 27 from the field and 1 of 13 from 3-point range. Clark also exited the game for a sequence in the fourth quarter after hobbling on her right leg, though she quickly re-entered after a trainer massaged around her knee at the end of the bench.

The Hawkeyes hadn’t played since beating Southern on Nov. 17. Three games were canceled, first a home matchup with Drake followed by dates with Seton Hall and USC in the Cancun Challenge in Mexico.

Iowa: Coach Lisa Bluder had said the pause had cost the team “really good preparation” time for a six-game month that includes two Big Ten games. She was most concerned about details like how the interruption would impact timing on passes and cuts. Iowa got a quick start by feeding Czinano in the paint for a 6-0 lead, but the Hawkeyes could hit nothing reliably outside as Duke kept stretching its lead. Iowa got no closer than 11 points in the fourth quarter.

Duke: The Blue Devils were playing their second game against a ranked opponent under Lawson, whose debut season amid the pandemic lasted just four games when the program opted out of the rest of the season at Christmas last year. Now they have their first 7-0 start since opening the 2013-14 season at 10-0, with much of their success coming from their rebounding work (including 16-10 on the offensive glass).

Iowa: The Hawkeyes host Michigan State on Sunday in their Big Ten opener.

Duke: The Blue Devils visit Penn on Sunday, then have an extended break before facing top-ranked South Carolina on Dec. 15.