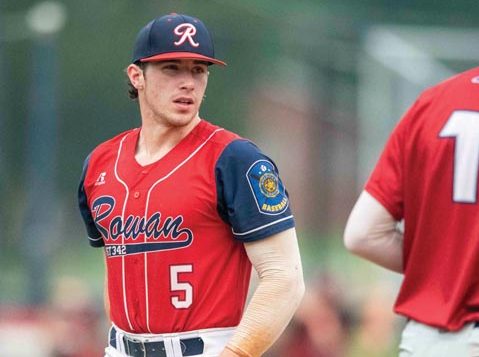 WHITEVILLE — Even in December, Logan Rogers is working out.

The clanging and banging of heavy iron can be heard in the background as Rogers talks about his recent commitment to Catawba College’s baseball program.

It may be the least surprising commitment of all-time because Catawba coach Jim Gantt got to see Rogers’ at-bats last summer for the Rowan County American Legion team that Gantt coaches as his part-time job.

An unusually focused athlete, Rogers, 19, was stunning last summer, to say the least. He was a combination of Vladimir Guerrero Jr. and Shohei Ohtani. He was a man among boys.

While Gantt got to see Rogers, Rogers also got to watch Gantt coach for the past two summers.

He got to know him during the bleak COVID season of 2020 when NC3 baseball temporarily stepped in for American Legion ball at mostly empty Newman Park. Then he got to know him better last summer when a late-starting Legion season took place with Rowan playing home games in Granite Quarry at Staton Field.

“Catawba is the best fit for me — I have no doubt about that,” Rogers said. “I’ve played two years for Coach Gantt, and I’ve learned a lot. I’ve really enjoyed playing for him.”

Back in the summer of 2020, Rogers’ baseball future appeared to be as a southpaw hurler.

An early spring injury, a crushing setback to his hopes at the time, became the proverbial blessing in disguise when Rogers was forced to focus on hitting.

A window closed.  A door opened. But it didn’t happen overnight.

He started the season 2-for-13, but when he started getting steady at-bats in April and May, things started to click for him at the plate. In Southeastern’s final three-game series, he went 9-for-12 and drove in six to elevate his final batting average to .358. He knocked in 17 runs in 30 games.

There was an interval of more than a month between Southeastern’s last game and Rowan County’s American Legion opener on June 19, but Rogers didn’t cool off any.

He put together a smashing summer. Rowan played just 22 games, but Rogers had 38 hits, drove in 49 runs — an insane pace for 22 games — and batted a program-record .513. He blasted eight homers and showed power to all fields. He launched two homers in a five-inning game with Mocksville. His on-base percentage for the summer was .593.

He wrapped up the season in Cherryville with a grand slam in the state tournament.

“Confidence is such a big part of baseball, and I did play with a lot of confidence,” Rogers said. “I went to the plate expecting to get a hit. If you stay true to yourself, great things can happen.”

Rogers will play again this spring for Southeastern. He’ll probably pitch some, but his focus now is on continuing to get better at the plate.

Defensively, the 5-foot-11 slugger can handle first base or a corner outfield spot.

He’ll enroll in the fall of 2022 at Catawba and will get to compete at renovated Newman Park.

Rogers has gotten better every year for quite a while, so scary as it sounds, the best may be yet to come.

He plans to major in exercise science.