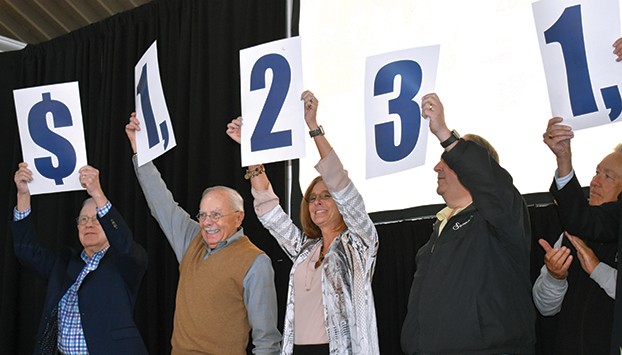 Past United Way campaign chairs Larry Macon, Carl Repsher, Penny Bowman, Mark Lewis and John Struzick helped announce the fundraising total of $1.23 million. The organization will continue to fundraise through the end of the year, seeking a total of $1.5 million. Ben Stansell/Salisbury Post

The duo theatrically exited the vehicle, feigning to have just descended the Salisbury-Rowan Utilities water tower in downtown Salisbury. Lee ascended the tower multiple times in a daring stunt intended to help the Rowan County United Way reach its fundraising goal of $1.5 million.

The United Way’s official campaign came to a conclusion after Lee and Behmer took the stage and called on past campaign chairs to unveil a total of $1.23 million raised. Coming in shy of the total, Lee said the nonprofit will continue to work toward its desired tally.

“We’re going to keep pushing until we get to where we need to be. I can guarantee you all that,” Lee said. “But just know, beyond that number, your United Way will always work to provide hope for our neighbors in need.”

The fundraising efforts are split amongst a dozen divisions, each chaired by an individual and charged with seeking funds from various parts of the community. As of the finale, four divisions met or surpassed their fundraising goals and all divisions surpassed 70% except for miscellaneous category, which is a catch all for donations that don’t necessarily fit into another classification.

The division that raised the most money in relation to its goal is Industrial No. 1 chaired by Denise Hallett, which raised $74,632, or 141% of its $52,912 goal. Special Gifts, chaired by Elizabeth Cook, raised the most money by bringing in $200,000. Many of the division chairs who reported their totals on Wednesday said they were expecting to receive more donations.

Behmer described the end of the campaign as “bittersweet,” since he is soon leaving his position as Salisbury-Rowan Utilities director to assume the same role for Raleigh’s municipal water system. The campaign’s theme was “Let it come. Let it go. Let it flow,” a nod to his field of expertise. Behmer was expecting to serve as past chair for the Rowan County United Way next year, but will find another way to stay involved with the organization from two hours away.

David Jordan, who served as the organization’s president in 1969, took the lectern Wednesday to talk about the role the United Way has played in the community.

“The organization has served this community well,” Jordan said. “Millions of dollars has been raised over this long number of years.”

The United Way has raised just under $70 million for Rowan Countians since its inception.

The winner of the campaign’s auto giveaway was also unveiled during the finale. The 12 finalists whose names had been drawn during progress meetings were brought to the stage. Representatives from each of the four participating car dealerships narrowed down the contestants by drawing their names once again. This time, participants were eliminated when their names were drawn. Each of the contestants were entered in the contest because they donated to the campaign.

Chip Edwards, an assistant principal at East Rowan High School, was the last name drawn from the gift wrapped box and was therefore the winner. Edwards will have a $16,500 credit to use to purchase a car from Ben Mynatt Nissan. He was one of three East Rowan faculty members who were in the final drawing. Edwards said he has given to the United Way’s campaign every year since he started at the school seven years ago and has even led fundraising efforts at East Rowan. 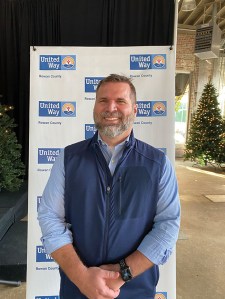 Edwards said he was in shock when he was announced as the winner.

“This is something that never really happens,” Edwards said. “So, I’m still processing.”

Edwards said he will probably use the money to upgrade from his 2003 Toyota Corolla, which might be handed down to his son, Ethan, who just turned 16 and is ready to hit the roads. Edwards has his eyes on a truck, but plans on surveying the lot before making the big decision.

More information about the Rowan County United Way can be found online at rowanunitedway.org.