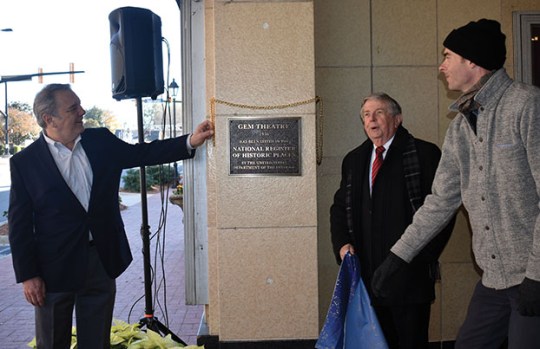 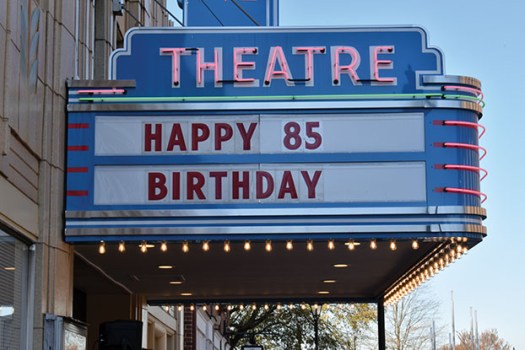 Opened in December 1936, the Gem Theatre is celebrating its 85th birthday with a renovated marquee and other internal improvements. Ben Stansell/Salisbury Post 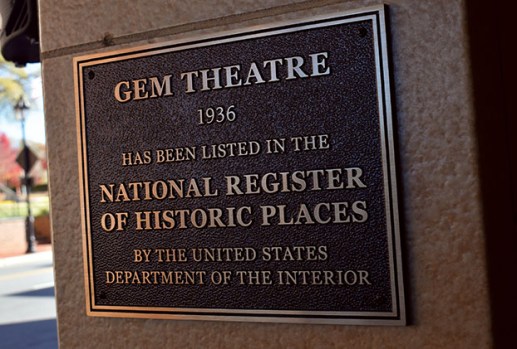 The Gem Theatre has officially been listed in the National Register of Historic Places, which gives the building certain protections and also solidifies its place in the Library of Congress. Ben Stansell/Salisbury Post 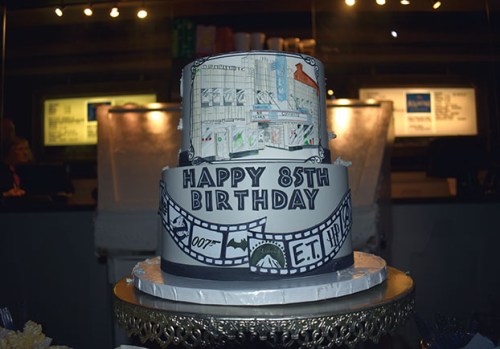 KANNAPOLIS — A month shy of its 85th birthday, the Gem Theatre’s preserved place in American history was celebrated Tuesday morning.

During a brief ceremony held under the downtown Kannapolis theater’s iconic marquee, the city and theater were presented with a golden plaque from the State Historic Preservation Office denoting that it has officially been listed in the National Register of Historic Places. The theater was entered in the register in August of 2019.

“It truly indicates to other people the significance of this building to the history of Kannapolis and the fact that this is one of the constants that has remained unchanged through all these years,” said Steve Morris, who owns and manages the theater’s operations.

The plaque was unveiled by Kannapolis Mayor Darrell Hinnant, Brett Sturm from the State Historic Preservation Office and Morris, who combined to pull down a blue sheet covering the plaque as a small crowd applauded. The unveiling was followed by a party held in the theater lobby. A movie-themed birthday cake was cut and attendees were allowed to wander through the historic theater to explore new renovations.

The Gem Theatre originally opened on Dec. 31, 1936, by Cannon Mills Company. The single-screen theater was designed externally and internally in an Art Deco style and was intended to be a place for mill workers to spend their free time.

“This really is a piece of mill history,” Sturm said.

The Gem Theatre was gutted almost entirely by a fire in 1942 but was reconstructed in 1948. It has remained open except for temporary closures for improvements ever since. The Gem Theatre is now one of the oldest single-screen movie venues in continuous operation and one of the few with balcony seating. The venue can seat over 900.

Cannon Mills Company decided to relinquish the Gem Theatre in 1972 and its management was transferred to a board of directors. Morris began at the Gem Theatre in 1995 as vice-president, general manager and part-owner. He is now the owner and operator of the theater business, but the city of Kannapolis is the owner of the building after purchasing it from David Murdock in 2015 as part of its downtown revitalization efforts.

Although the downtown surrounding the Gem has undergone an extensive makeover in the past half decade, the theater remains a living relic from a time before.

“When I talk to my friends who have lived here all their lives, they say that they can remember getting a quarter and coming here and getting into the theater and getting a drink and popcorn and staying all day on Saturday to watch a movie three or four times,” Hinnant said. “So, it is a part of our culture. It is a part of our lives.”

The Gem was temporarily closed due to the COVID-19 pandemic in 2020 and closed again from February to May of this year for renovations to the roof, ground floor bathrooms, HVAC and trademark outside marquee.

Those improvements were on display during the ceremony on Tuesday morning. While most of the renovations aren’t exactly obvious, Morris said the upgrade to make the downstairs bathrooms handicap-accessible is significant.

“We encourage everybody to go to the bathroom, frequently,” Morris said. “We’re really proud of the renovations that have occurred there.”

The theater will undergo more renovations in the future, including the addition of more seats and upgrades to the stage that could make it suitable for live performances. The timeline for those renovations has not yet been determined, Morris said.

All of the improvements both completed and forthcoming, Morris said, will help the theater continue to operate for years to come.

The multi-year effort to have the Gem Theatre listed as a national landmark was spearheaded by the city of Kannapolis and aided by the State Historic Preservation Office.

Being listed on the National Register of Historic Places provides the Gem Theatre with certain protections against development, but does not restrict what Morris or the city can do with the building. It also could open the door for the Gem Theatre to benefit from tax incentives or other programs. The Gem Theatre’s application for historic landmark status will be entered into the library of congress in Washington D.C.

“It’s an act of documentation,” Sturm said. “If something happened, God forbid, and this place burnt down, they would have in that document the sort of definitive history of this building and that’s pretty cool.”

More than anything, the designation will help protect and promote one of the city’s most important cultural landmarks.

“The name is fitting,” Sturm said. “It is a little gem of a building.”