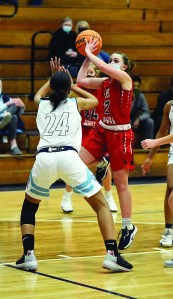 LEXINGTON — East Rowan’s girls were the last team in the county to get the season started.

The Mustangs are 0-1 after a fast start, but a slow finish at Central Davidson.

East’s best quarter was the first one. The Mustangs led 14-8.

Central caught up at 20-all at halftime.

“Tied at half and still close in the third, but the fourth quarter was a bit of a struggle,” said East’s Bri Evans, a former Catawba star who was making her varsity head-coaching debut.

On the bright side, 10 different Mustangs scored.