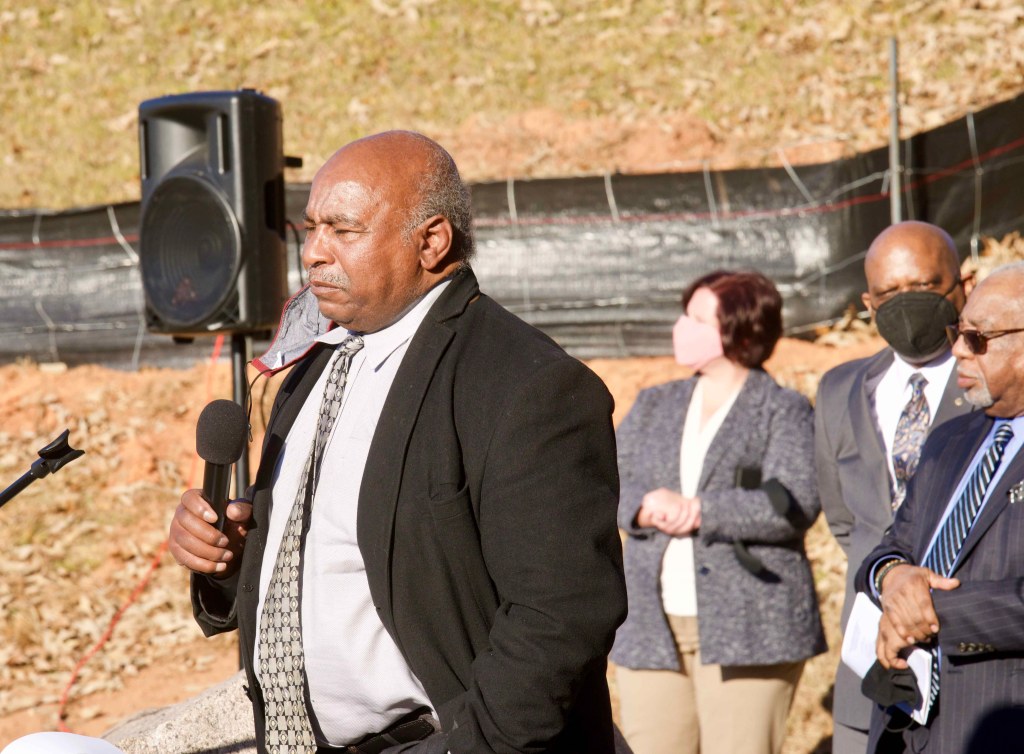 SALISBURY — Willie Lanier, son of a shipping clerk and a beautician, made his way gingerly down the cement steps at Livingstone College’s Alumni Memorial Stadium, to make good on a promise.

The Hall of Famer — that includes the Virginia Sports Hall of Fame and the Kansas City Chiefs Hall of Fame in 1985, as well as the Pro Football Hall of Fame — is 76 years old, which makes him four times as old as some of Livingstone’s student-athletes. His days of crushing running backs and picking off passes for the Chiefs ended long ago, in 1977, but what he does now is more vital. What he did on Tuesday at Alumni Memorial Stadium goes beyond a game.

Lanier brings confidence and hope wherever he travels through his HBCU Fields of Dreams, which is managed by the nonprofit Honey Bear Project.

The “Bear” in the project is Lanier, who played college ball for the Morgan State Bears. He also earned the “Bear” nickname as the Chiefs’ middle linebacker, although some opponents he knocked unconscious preferred his other nickname — “Contact.” That one speaks for itself.

Miami Dolphins fullback Larry Csonka likened running into Lanier to being tackled by a grizzly bear. Oakland Raiders back Hewritt Dixon said being tackled by Lanier was like having a whole mountain fall on top of you.

Born in Clover, Va., Lanier grew up with segregation. He was 8 years old in 1954 when the Supreme Court unanimously ruled that state-sanctioned  segregation of public schools was a violation of the 14th amendment and was unconstitutional.

When Lanier attended Maggie Walker High in Richmond almost  a decade after the Brown decision, he was still attending an all-Black school. He graduated in 1963.

He didn’t start for the Maggie Walker football team until he was a junior. A coach named Cannonball Cooper switched him to linebacker as a senior, and that’s where it kicked in for him. He broke bones and he punished everyone he got his hands on, but he still flew completely under the recruiting radar.

Undaunted, he recruited himself, making a call to Earl Banks, the head coach of Morgan State, a large HBCU in Baltimore. He convinced Banks to give him a shot as a walk-on.

He earned a business degree from Morgan State in four years, and that degree would serve him well later in life. On the field, he was two-time small college All-American. He was a candidate to be picked in 1967, when the AFL and NFL held a combined draft for the first time.

But Lanier did not run good 40-yard dash times, so most teams wrote him off as too slow.

The Chiefs did not. Scouting was a lot less scientific then. Chiefs head coach Hank Stram had a friend named Frank Barnes who was a part-time scout. Barnes had seen Lanier play and recommended him. That’s what it came down to. One man’s opinion.

The Chiefs’ first-round draft pick in 1967, a towering defensive end from Miami, didn’t last long in the pros.

But the Chiefs had two second-round picks. They used both on linebackers. With the 47th overall pick, they drafted Jim Lynch, a celebrated white player, the captain of Notre Dame’s national champions. With the 50th pick in the draft, the Chiefs took the former walk-on from Morgan State.

Lynch would turn out to be an excellent player. He was a solid starter for the Chiefs for a decade and made a Pro Bowl.

Lanier would be more than excellent. He would become one of the all-time greats. He’s been named to a number of all-time NFL teams, the top 75, the top 100, and so on.

Lynch was expected to play the middle linebacker spot for the Chiefs, but Stram moved him to the outside and put Lanier in the middle.

That wasn’t standard operating procedure. It seems ludicrous now, but in 1967, Blacks were not regarded as candidates for middle linebacker, in the same way they weren’t regarded as candidates to play quarterback. Coaches acknowledged Blacks could be fast and strong, well-suited for running back, defensive back and receiver, but middle linebacker and quarterback were thinking men’s positions. Those men led and called signals. They were “whites only” positions.

So Lanier became a ground-breaker, the NFL’s first standout Black middle linebacker. By the early 1970s, Lanier was regarded with the same level of awe as Chicago’s Dick Butkus. There were opponents who would say Lanier was the best of them all.

While he wasn’t fast in the 40, Lanier was quick, smart, tenacious and incredibly strong. His 6-foot-1, 240 pounds was about perfectly distributed with a 34-inch waist and a 50-inch chest. He was a student of the game. He could call signals.

Lanier had to overcome a terrible concussion his rookie season. He led with his head on a tackle and a running back’s knee made a direct hit on his helmet. He experienced vertigo and double vision for a long period of time.

He adjusted his tackling style after that and started bear-hugging opponents, squeezing them into submission.

On Dec. 20, 1969, in the playoffs, a lot of people who didn’t know about Lanier discovered him. Joe Namath and the New York Jets had first-and-goal at the Kansas City 1-yard line in the fourth quarter.  A screaming Lanier, tears running down his cheeks, led an inspired goal-line stand that turned that game in the Chiefs’ favor.

Then the Chiefs beat bitter rival Oakland for the AFL championship. Then they thoroughly whipped the Minnesota Vikings in the Super Bowl, using eight Black starters on defense. That was a game-changer.

Lanier had an interception in the Super Bowl. While it wasn’t the best game he ever played, it was his best day in football.

In the last 10 quarters of that season, the Chiefs’ defense allowed two touchdowns against three excellent teams.

From 1968-75, Lanier was selected for eight straight Pro Bowls. In his career, he had 27 career interceptions and 18 fumble recoveries.

On Tuesday, the groundbreaking middle linebacker came to break ground on a new day at Livingstone. Several speakers called him “the architect.” For Livingstone, it will mean a new Blue Bear-colored turf football field, an 8-lane Olympics-quality track and a state-of-the-art scoreboard.

The football field will be moved a little closer to the home side when all is said and done, and it should all happen in a matter of months.

“This is a monumental moment in the history of Livingstone,” said Dr. State Alexander III, executive assistant to the president. “One of the most critical moments in our history and you are here to witness it.”

Quite a few people did witness it. It was scheduled for 1 p.m., then moved back to 2:30 p.m. when Lanier’s arrival was delayed. He finally arrived shortly before 3 p.m. and was greeted with warm applause. There were no delay of game penalties. The weather, rough and chilly on Tuesday morning, had turned delightful, more like the last day of September than of November. The skies were Livingstone blue.

Lanier has already brought dream fields to Virginia Union in Richmond, where a 113-year-old field was replaced and is now Willie Lanier Field, and to Central State University in Ohio.

There are many schools on the project list, including most of the CIAA, but Livingstone was a priority for obvious reasons.

Black football was born on the Livingstone campus. The first football game between two Black colleges was played in the snow on Livingstone’s front lawn in 1892 as Livingstone tangled with Biddle, now known as Johnson C. Smith.

That game led to a lot of opportunities for a lot of people, including Lanier.

“Livingstone College is where it all began,” Lanier said. “What occurred on Livingstone’s front lawn nearly 130 years ago paved the way for people like me.”

The price tag of the LC project is $2.8 million, so it’s a windfall for the Blue Bears, who haven’t benefited from an athletic upgrade in two decades.

It was a proud day for Livingstone administrators and coaches, led by president Jimmy R. Jenkins.

“We have had some troubled seas and terrible storms the last 15 years, but we had an experienced captain guiding us,” Davis said. “He knew we still had to sail and could not just stay on the shore.”

Added Bruce Stanback, president of Livingstone’s alumni association to a smiling assemblage,” Today we are honeymoon happy and peacock proud.”

In some ways it was a typical groundbreaking — hard hats and shovels, prayers and speeches, applause and pats on the back.

But the look on a lot of faces said this day was anything but typical. It was a day in the sun for Livingstone that would have been unthinkable 40 years ago, 20 years ago, even 10 years ago.

For a Hall of Famer born 76 years ago during segregation, the day meant a great deal. Equalizing opportunities for long underfunded programs will be the lethal linebacker’s legacy, even more than his Super Bowl ring, the eight Pro Bowls and his enshrinement in the Pro Football Hall of Fame.

“There’s a joy in being able to be involved in the beginning of something,” Lanier said.  “I’ve been graced with the opportunity to help.”