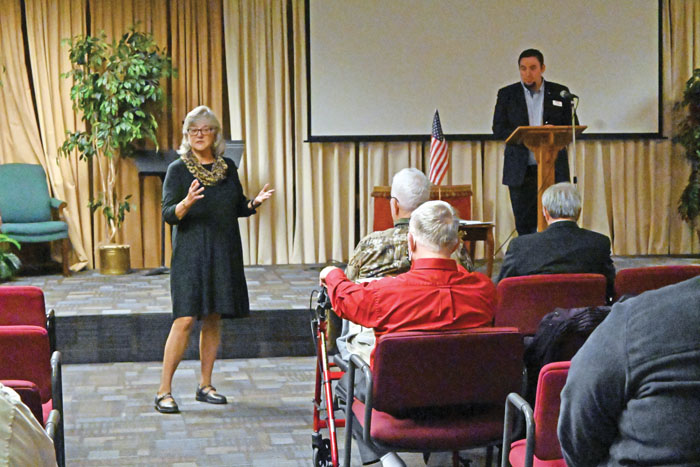 Tuesday’s meeting resulted from outgoing chair Rev. Brad Jenkins’ decision earlier this month to run for District 83 in the 2022 election. Recently approved maps show District 83 will comprise the southwestern portion of Rowan County and the northwestern corner of Cabarrus County, and does not contain an incumbent. Chairs are required to step down after declaring a run for elected office.

When electing a new chair, members of the party can nominate any registered Republican they wish, and that person can also accept or deny the nomination. The executive committee, however, ultimately votes for the chair. During the meeting, Jenkins said two nominees had asked to be removed from consideration, including former city council candidate and local real estate broker Jessica Cloward and Devin Stubbs, who currently chairs the Young Republicans.

Additionally, Erica Vedeikis of the Rowan Republican Women’s Club declined her nomination from Hewitt and instead formally nominated Hewitt.

“I don’t think anybody in this room doubts that Elaine is the right person to move us forward,” Vedeikis said. “She has been an inspiration to us all. She has been the person that we have turned to with our questions asking for advice.”

Jenkins thanked Republicans for their confidence in electing him as chair and said the moment was bittersweet. And under Hewitt’s leadership, Jenkins anticipates the opportunity to “push back the blue” throughout the region.

“We have got some of the most tremendous Republicans in the entire state and the entire nation,” Jenkins said. “We’ve got a great unity and that really is to your credit.”

Hewitt told the Post efforts at this time are focused on the 2022 primary in March.

“It’s going to take all of us working together and we have key tasks to do,” Hewitt said.

All other leadership positions still stand, with Greg Skelly as vice chair, Tyler Smith as treasurer, Melissa Eller as secretary and Vincent Spillman with media.

Former chairman Don Vick told the Post he’s excited for Hewitt, who served as vice chair during his tenure.

Rep. Harry Warren, who represents Rowan County in the state House, made the motion to close nominations and also told attendees to thank God for opening up an opportunity for Hewitt to step in and serve in this capacity.

“I have stood in the sidelines and benefited so much from her help and (her husband Butch’s) help over the years,” Warren said. “I know that she has so much to offer to us if we follow her lead, give her the support she needs, I think we’ll take this county party to even greater growth than we’ve seen in the past.”

Hewitt, a native of Rowan County, is a veteran of the U.S. Air Force and previously worked part-time with the staff of First United Methodist Church. She and her husband, Butch Clements, have three adult children and eight grandchildren.