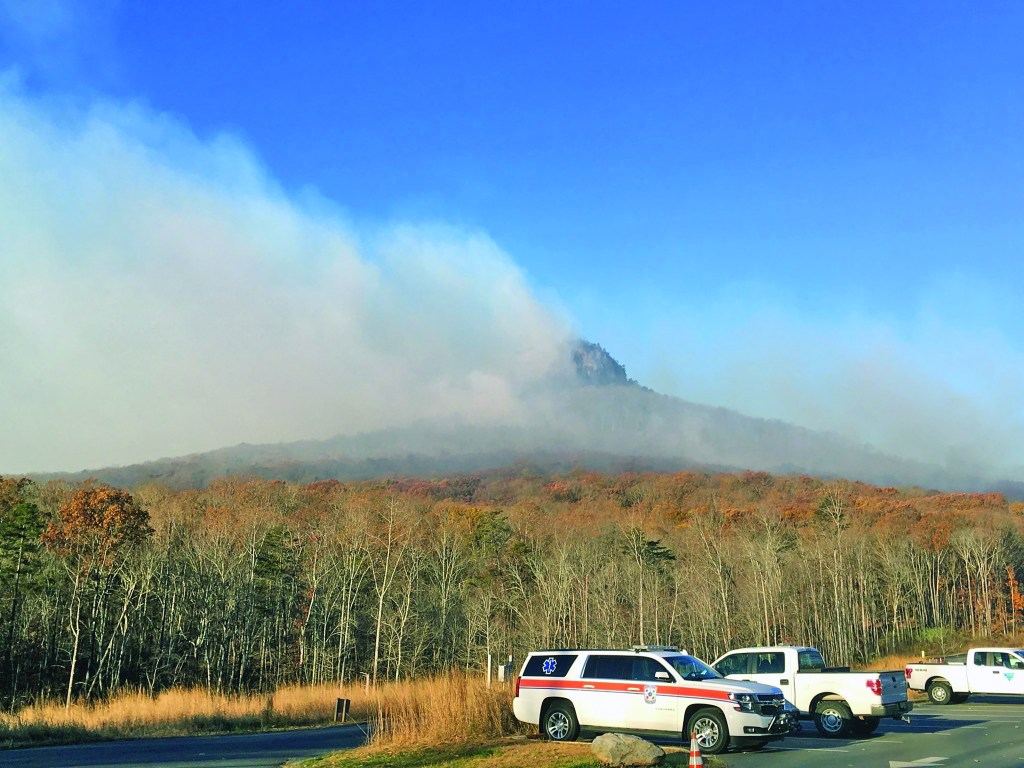 Photo courtesy of Brian Vick, a park ranger at Lake James State Park who helped firefighters on Monday work to put out a fire at Pilot Mountain State Park in northwestern Winston-Salem.

To coincide with and strengthen the state ban, Rowan County Fire Marshal Deborah Horne has initiated a local ban that prohibits burns within 100 feet around an occupied dwelling. The ban goes into effect at 5 p.m. Tuesday and will be in place until further notice.

“We’re just asking that people simply don’t burn until this is over with,” Horne said. “We hope that this is short-lived.”

The bans prohibit types of burning that may be common, especially this time of year, including burning leaves, branches and other plant material. In all cases, it is illegal to burn trash, lumber, tires, newspapers, plastics or other non-vegetative materials.

“We are getting multiple calls daily of fires, grass fires, brush fires, leaves that have been burning that got out of hand,” Horne said.

The bans nullify any burning permits that have already been issued. No new permits will be issued until the ban is lifted.

The only exception to the statewide and local bans are cooking fires such as grills or outdoor smokers.

Anyone violating the state’s burn ban faces a $100 fine plus $183 court costs. Any person responsible for setting a fire may be liable for any expenses related to extinguishing the fire. Local fire departments and law enforcement officers are assisting the N.C. Forest Service in enforcing the burn ban.

The Pilot Mountain fire has been fueled by “abnormally dry weather” that is being experienced by much of the state.

“It is fall wildfire season in North Carolina, and we are seeing wildfire activity increase due to dry conditions,” Agriculture Commissioner Steve Troxler said in a news release. “With these ongoing conditions, a statewide burn ban is necessary to reduce the risk of fires starting and spreading quickly. Our top priority is always to protect lives, property and forestland across the state.”

Most of Rowan County is currently classified as being in a “moderate drought,” with a small portion of the southeastern part of the county classified as “abnormally dry,” according to the U.S. Drought Monitor.

According to the National Weather Service, the rainfall total in Salisbury last year reached 69.75 inches. Through September of this year, rainfall totaled 34.89 inches. Data for October and November were not available, but would likely only account for a few more inches of precipitation.

With drought conditions in place, Horne said it doesn’t take much for a small fire to become a big problem. High winds can pick up a few embers and carry them a significant way.

“What someone thinks is a very small fire can start out that way, but then it escapes and that’s when we get 911 calls,” Horne said. “I don’t think people expect it to escape quite like it does with it being so dry.”