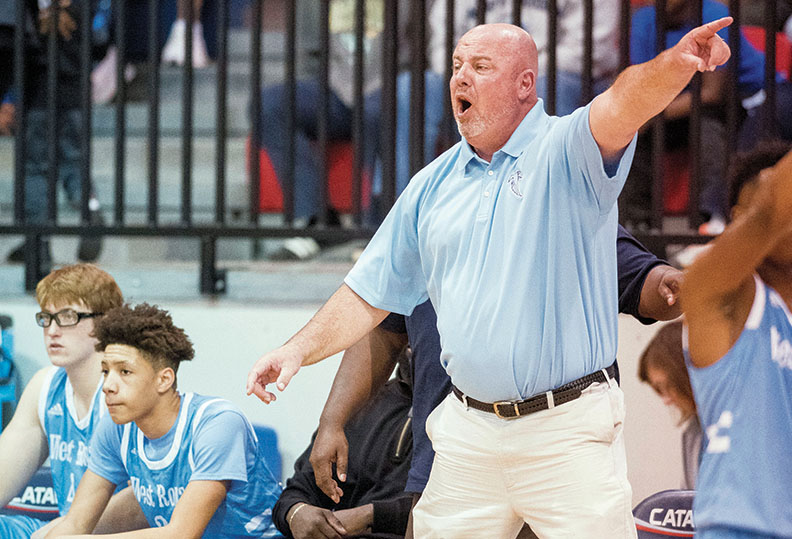 Eleventh in a series of reports on local basketball teams.

Playoffs: Lost 66-62 in third round to Crest

The Falcons will tackle this season looking to win as many as they can, but some of what West does will be in preparation for 2022-23. If all goes according to the blueprint, that’s when a towering group of youngsters will be tough to deal with.

“You can’t teach height, and we’ve got that,” Gurley said. “But you also can’t teach experience. The only way to get experience is to play.”

An all-senior starting lineup of Jalen Moss, Zeek Biggers, Macari Allison, Braden Graham and AJ Mauldin keyed a stellar season last winter that included a conference co-championship, a conference tournament championship and two playoff victories. That crew accounted for 3,336 career points and made West a factor statewide again. At times, the Falcons were ranked No. 1 in 3A by MaxPreps.

If not for COVID, Graham and Mauldin would have been 1,000-point scorers. Moss was a frequently devastating point guard and a two-time county player of the year. Georgia Tech football recruit Biggers’ height and width and Allison’s wingspan made them unique defensive obstacles.

But they’ve all moved on.

So has Jayden “Juke” Harris, who excelled as a freshman sixth man and actually led the Falcons in scoring a few times. Harris transferred and is expected to be a key player for the Salisbury Hornets this season. Even seventh man Sam Wood is gone.

That’s a short list comprised of senior football stars Josh Noble, the mammoth lineman, and Noah Loeblein, the quarterback. They were usually the eighth and ninth men for Gurley last season. Both provided some quality depth and hustling minutes. Both scored 23 points for the season.

“They’re not big scorers, but they’re great guys, and we’ll need them to lead this team,” Gurley said. “We’ve got so much youth. We’re going to be going through puberty together.”

West lost 62-43 to Mooresville on opening night. The Falcons were right there at halftime, but couldn’t keep pace with a more experienced club in the second half.

That loss made it obvious the Falcons will take their lumps, but those growing pains will be experienced by guys who have grown to impressive dimensions.

“He’s come a long way,” Gurley said. “Still learning, but getting better every day. We need rebounds from him.”

Jacobs, a 6-foot-7 soph, might provide points and rebounds in bunches. He scored in double figures against Mooresville.

“Once he finds consistency, he’s going to be a very good player,” Gurley said.

Givens, a 6-foot junior guard who produced some knockout games for the jayvees, is expected to be one of West’s top scorers. He also cracked double figures against Mooresville.

“He can shoot it and he’s got a nice set of skills,” Gurley said.

Connolly, a 6-foot-3 junior forward, will be an important piece of the puzzle.

“He’s cerebral, he’s hard-nosed, and he seems to have a calming effect on everybody,” Gurley said. “He’ll play big minutes.”

“He’s a tough kid who came here from New York,” Gurley said. “He’s going to be getting a lot of on-the-job training.”

Elijah Holmes, a lefty wing who came to West from A.L. Brown, is expected to play quite a bit.

The team will have two senior reserves in guard Mario Robertson, a quick lefty, and Spenser Harrison, a shooter.

Juniors Paxton Greene and Matthew Gabriel will add quickness to the roster.

Adrian Stockton, one of the school’s fastest athletes, might play some jayvee, but he also could help the varsity.

The wild card for the Falcons is Athan Gill, who was a sensation at West Rowan Middle a few years ago.

The 6-foot-3 Gill, now a junior, has been at a few places since then, including C.D. Owen in Swannanoa, but he has returned to West. Gurley hopes to have him in action in a few weeks.

“He’s tough, he’s super competitive, and he can play any position,” Gurley said.

Anytime you lose the top seven scorers, a challenging season is ahead, but the Falcons are ready to compete.

“We’ll have to be persistently patient with this group,” Gurley said. “We’ll get as much as we can out of this season, and we’ll grow together.”