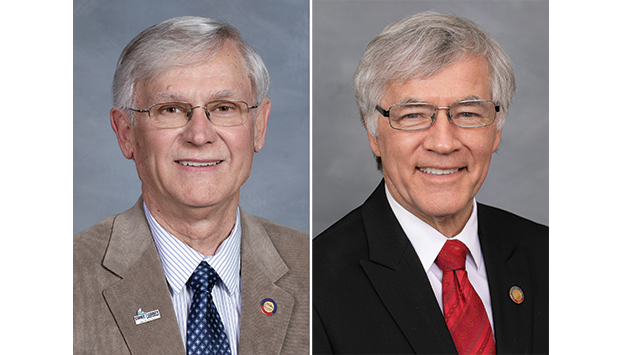 Reps. Harry Warren and Wayne Sasser have signed onto a letter with nearly 200 state legislators across the U.S. calling for a nationwide “forensic audit” and decertification of the 2020 election.

Warren and Sasser are both Republicans who represent Rowan County.

Last week, Wendy Rogers, an Arizona state legislator, posted to Twitter that more than 180 legislators from across 39 states signed onto a letter calling for a “forensic audit” and for states to decertify its electors where it’s shown the election was certified “prematurely and inaccurately.” Further, it calls for the U.S. House to reconvene if it’s shown President Joe Biden received fewer than the 270 electoral college votes needed to claim victory or if former President Donald Trump is shown exceeding that 270 mark.

Those who signed represent a little more than 2% of all state lawmakers across the nation. Warren and Sasser were two of 16 North Carolina lawmakers to sign the letter.

“It’s important to understand that an inordinate number of people across the country are convinced the 2020 elections were compromised,” Warren said. “While I don’t expect an audit to change the outcome of an election, it would provide ample opportunity to determine systemic vulnerabilities that could be corrected to ensure the integrity of future elections and reassure the public of the validity of the election process.”

The letter comes after Rogers’ home state of Arizona just completed an audit conducted by a conservative political group called Cyber Ninjas. The audit reaffirmed Biden’s win, but Rogers alleged in the letter the audit found “a corrupted 2020 election.”

North Carolina is one of many states that automatically audits its elections. One audit from the 2020 election involved bipartisan officials in every county counting by hand the ballots of two randomly selected precincts or voting sites. Another statewide audit showed the machine counts of ballots were accurate. Results of the audit are available on the N.C. State Board of Elections website.

Data from the State Board of Elections shows 570 cases of alleged fraud were referred to prosecutors between 2015 and 2019. The plurality of cases were related to felon voting — 459. There were 49 cases related to double voting. Following the 2020 election, the state board referred for prosecution 34 cases of voter fraud, including 26 from felons casting votes, three double-votes, two voter impersonation attempts, one case of absentee by mail fraud, one case of a non-citizen voting and one case deemed “other.”

Sasser said he signed the letter because he wants “every vote counted.” He added that North Carolina wouldn’t have an audit because “the governor would veto any bill we passed to do that.”

“There will be no decertification in North Carolina, but maybe in other states,” Sasser said.

North Carolina lawmakers are working on a slew of bills that aim to improve voter and election integrity. The recently signed state budget includes a provision that would prohibit the types of settlements that resulted from a U.S. Supreme Court case just days before the election last year. In that 5-3 ruling, the court ruled it wouldn’t interfere with a settlement reached with the North Carolina Board of Elections to accept mail-in ballots until Nov. 12 as long they were postmarked by Election Day. That settlement extended North Carolina’s current law that grants a three-day grace period for mail-in ballots.

One bill that lawmakers passed this month is the Election Day Integrity Act, or Senate Bill 326, which moves the deadline for absentee by mail ballots to Election Day. Sen. Carl Ford, a Republican, was one of the co-sponsors of the legislation, but he did not sign onto Rogers’ letter. S.B. 326 has been presented to Gov. Roy Cooper, a Democrat.

Though filing for the 2022 election begins next month, some candidates have formally organized campaign committees and announced bids for the district and superior court races.

Filing for the 2022 election will begin Dec. 6 at noon and end on Dec. 17 at noon. The primary election is March 8, with the general election in November 2022.

Four open seats for judges on North Carolina District Court 19C, which serves Rowan County, will be open in the 2022 election. Chief District Court Judge Charlie Brown has announced he wouldn’t seek re-election after more than two decades on the bench.

Salisbury attorney Lauren Hoben, who has practiced with the Law Office of Lauren W. Hoben since 2014, has declared a run for Brown’s seat. Republicans Beth Dixon, Kevin Eddinger and James Randolph currently hold the other three seats up for grabs. Hoben is also a Republican.

Another Salisbury attorney, Chris Sease of Sease Law, has declared a run for Eddinger’s seat. Sease is a Republican.

Tim Gould, the senior resident superior court judge for Rowan County, is up for re-election next year after being appointed to the seat. He’s running to retain his seat. He’s also a Republican.