Panthers RB McCaffrey out for the season with ankle injury 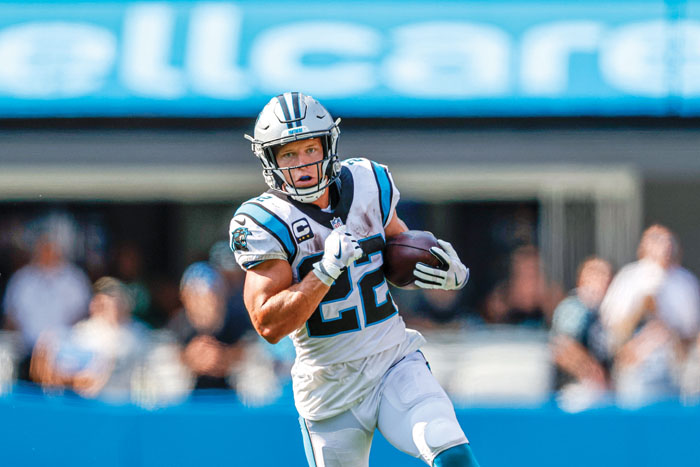 Carolina Panthers running back Christian McCaffrey runs the football against the New York Jets during the second half of an NFL football game Sunday, Sept. 12, 2021, in Charlotte, N.C. (AP Photo/Nell Redmond)

CHARLOTTE — The injury bug has gotten Christian McCaffrey yet again.

The Carolina Panthers often-injured running back will miss the remainder of the season with an ankle injury, the team announced Monday.

McCaffrey had an MRI that revealed the injury was severe enough to put him on injured reserve. Because of his anticipated recovery time and given that it would be his second time on IR, the news means McCaffrey will miss out on Carolina’s final five regular-season games following its bye week.

He missed 13 games last season with various injuries, including seven with a high ankle sprain.

The 2017 first-round draft pick was injured in the first half of Carolina’s 33-10 loss to the Miami Dolphins and played only sparingly after that.

Since becoming the NFL’s highest-paid running back with a four-year, $64 million contract after an All-Pro season in 2019, McCaffrey will have missed 23 of 33 games in the last two seasons due to injuries.

The Panthers started the season 3-0, but lost McCaffrey to a hamstring injury in Week 3 against the Houston Texans. McCaffrey was outspoken at the time about the dangers of playing Thursday night games, saying he wasn’t a big fan.

The Panthers’ season spiraled out of control after that, going 1-4 with their best offensive player on the bench.

McCaffrey returned on Nov. 7 against New England, but the team lost. However, the following week the Panthers went to Arizona and upset the Cardinals, the NFC’s top team. Since then Carolina has lost to Washington and Miami to fall to 5-7, leaving them outside the playoff chase entering this week’s bye.

Chuba Hubbard is expected to start for the Panthers the rest of the way, with Ameer Abdullah seeing additional action. Hubbard’s best game came Oct. 10 against Philadelphia when he ran 24 times for 101 yards and caught six passes for 33 yards.