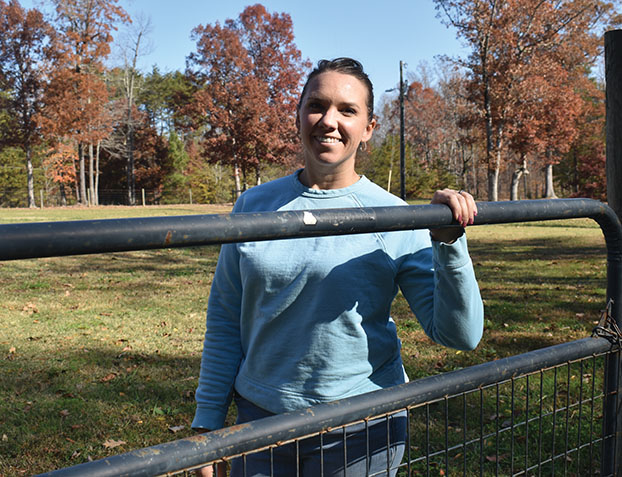 She was physically tired from long, nonstop shifts at Novant Health’s intensive care unit in Winston-Salem and mentally tired from seeing the stories of so many patients end badly.

Exhausted, Hutchens decided to retreat from the nursing field and focus on farming the 20-acre piece of land she and her husband purchased in northeastern Rowan County.

“I just needed a happier ending to something for a little while,” Hutchens said.

After farming their land on a small scale for a few years, Hollie and her husband Grant started Hutchens Homestead business in 2017. Hutchens left nursing to take over the operation full-time that same year. The farm has grown under her guidance. Its eggs, chicken, pork and produce can now be found at the Salisbury and China Grove farmers markets or ordered from her directly.

Working at the homestead instead of the hospital is more than just therapy for Hollie. It’s also a way to approach health care from a completely different perspective.

“Seeing all these people come through with chronic diseases that are diet related, lifestyle related, it left me wondering how I could get in on the front end to teach people about this?” Hutchens said.

Providing people with healthy, humanely raised meat and produce gives Hollie a chance to make a difference in someone’s life before they reach the hospital.

“Here, I feel like I can get in front of those people at the market and be that food source that’s delivered weekly to our customers,” Hutchens said.

Farming hadn’t been a part of Hollie’s life plan, even though she was involved with 4-H and Future Farmers of America while growing up in her small Texas hometown.

Hutchens left that hometown about as soon as she could.

“When I graduated high school, I ran as fast as I could to Dallas and quickly realized there were 700 people in my apartment complex,” Hutchens said. “I’ve always had that adventurous spirit to go and see and do and try.”

After meeting her future husband while he was in Texas working for NASCAR, Hutchens’ adventurous spirit led her to Salisbury in 2006. The Rowan County city was exactly halfway between Charlotte and Greensboro on a map, promising work opportunities, and was also close to Grant’s home in Statesville.

“I told my mom I wanted to move east and see what’s out there and she just said, ‘Please, God, go where you know somebody,” Hutchens said.

Hutchens lived downtown and battled traffic everyday on her I-85 commute to jobs elsewhere. She eventually earned a nursing certification and degree and started working in the ICU. After marrying, Hollie and Grant moved to their current home to be closer to his job in Lexington and hers in Winston-Salem.

The plot of land they chose, tucked away behind trees with rolling hills, also had opportunities for both of them. There was ample room for agriculture and an existing car shop.

“I saw the land and he saw the shop,” Hutchens said.

The 20-acres was previously a dump site. So, the first order of business was restoring the land to a healthy state. They paid for a company from Charlotte to come in and haul away about 16 tons of highway concrete from the property, but that was far from the only discarded material they stumbled upon.

“There was also a boat that was left in the woods. So, we had to pull the boat out,” Hutchens said. “We’ve worked really hard to rehab the land.”

The chickens they started raising have helped out with the process.

“Our biggest focus has been using chickens to rehab the land by dropping natural fertilizer and then rotating where they’re at and going back through and planting native grass seeds,” Hutchens said. “With rotating them, we don’t take too much resource out of the ground.” 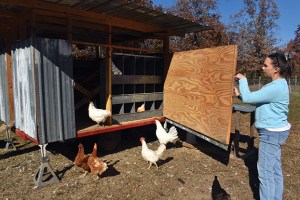 Hollie Hutchens points into the mobile chicken shelter she uses to house her birds. The moveable structure allows Hutchens to move the egg layers throughout her 20-acre farm, a common practice used in regenerative agriculture. Ben Stansell/Salisbury Post

From the moment the Hutchens began farming in 2014 by raising vegetables and chickens, they decided to be herbicide- and pesticide-free and implement regenerative farming practices.

“Our focus is to put more back in,” Hutchens said. “We want to try to preserve as much as we can and do it the right way.”

Early on, Hutchens relied on guidance from other Rowan County farmers and the Rowan County Cooperative Extension Office. She found mentors in Randy Elium of Elium Farm and Chase Reynolds of Two Pigs Farm. Hutchens now works as a farmhand for Elium when she has time. The two also share equipment and knowledge.

“You can’t be a farmer without a network of other farmers,” Hutchens said. “That would be the thing I’d encourage people who are getting into farming to know.” 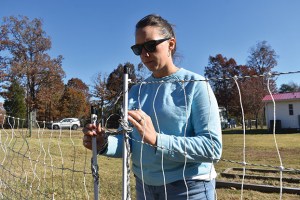 Although Hutchens gets help from her husband and two children when she can, she is the one responsible for caring for the family’s flock of chickens and pigs. She sells eggs, meat and some produce at the Salisbury and China Grove farmers market. Ben Stansell/Salisbury Post

She also relied on a few grants from Bread Riot, a local nonprofit food advocacy organization, to purchase necessary equipment.

“It was all about getting plugged into local organizations,” Hutchens said.

Hutchens added pigs and meat chickens to the farm over the years. She has been operating Hutchens Homestead primarily as a one-woman show while also looking after her two young children.

After a successful 2020 and 2021, Hutchens plans on increasing the farm’s production in 2022. She aims to raise about 500 meat chickens and eight hogs while maintaining the farm’s roughly 70 egg-laying hens.

Although farming has become a refuge from what she experienced in the ICU, Hutchens sees a lot of similarities between the practices.

“A nurse and a farmer are probably the two most optimistic occupations that exist,” She said. “You literally go in with a seed or you go into a situation that’s bleak and you have to stay optimistic. You have to put 100% into it and you don’t know what the outcome is going to be. It could be a hurricane, it could be a stroke. You don’t know what it’s going to be, but you can’t give up on it and stop caring for it and nursing it.”

More information about Hutchens Homestead can be found on its Facebook page or by emailing hutchenshomestead@att.net.