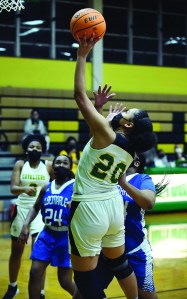 Wilkerson, who has a career high of 34. made a commitment to Columbia International over the weekend.

Wilkerson added six rebounds, five assists and three steals for the Cavaliers (1-1), who bounced back from an opening-night loss to Carson.

Dasia Elder returned from an ACL injury to give  North more depth.