SoFul yoga reinvents itself at Railwalk after pandemic move across town 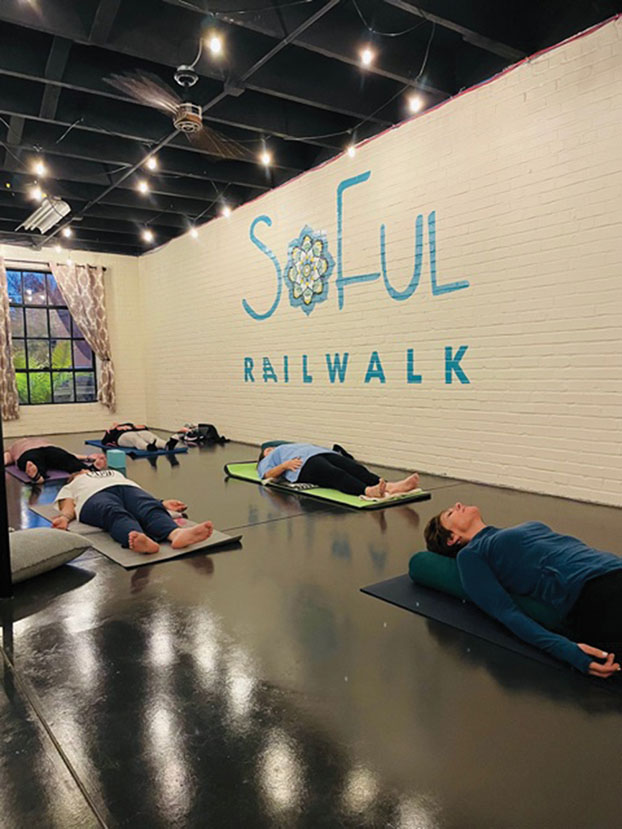 A class does yoga at SoFul's studio in downtown Salisbury. The studio, owned by The Forum, moved during the pandemic from its former home on South Fulton Street. Photo submitted.

SALISBURY — After a pandemic-induced closure and move across town, a reinvented SoFul Yoga and Wellness is striking a new pose at the Railwalk.

SoFul Yoga opened its namesake South Fulton Street studio in fall of 2017 as a collection of yoga lovers who wanted to share their passion for the practice with others. The studio not only hosted classes, but became engaged in the local community through various events.

The Forum, a fitness center on South Main Street, purchased SoFul in July of 2019. Matt Marsh, who co-owns The Forum with Steve Safrit, said the arrangement was a win-win for both parties.

“Ultimately, I think it got to a point for them where they didn’t want to deal with the business aspect of it, if something went wrong calling the landlord,” Marsh said. “They just really wanted to teach and that was great.”

The acquisition also allowed The Forum to expand its offerings, with members of The Forum receiving discounted rates for classes at SoFul.

“I thought it was a great extension of what we were offering from a health and fitness standpoint (at The Forum),” Marsh said.

Even under new ownership, SoFul continued to operate largely as it had before — until the COVID-19 pandemic forced it to close in March of 2020. The temporary closure soon became an extended break. As Marsh worked to reopen The Forum safely, he also started to think about reviving SoFul. Instead of reopening the studio in its previous home, Marsh decided to look for a location with better access to parking and a more fitting physical footprint.

“At one point I wasn’t even sure we’d open up anywhere because I had pretty much decided we were not going back into South Fulton,” Marsh said. “It just had too many challenges.” 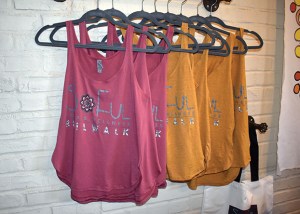 SoFul Yoga and Wellness kept its name even after moving from South Fulton Street, but the studio’s owners did add “Railwalk” to its branding. Ben Stansell/Salisbury Post

His search led him to the Railwalk arts district and specifically a location at 325 N. Lee St.

Cosmetic improvements to the new location started in October of 2020. The refurbished space now features a large studio, a small studio, a locker room where people can place their belongings during class and a relaxing foyer.

“The space is nice. As far as when you come in there’s a foyer area that’s inviting with tall ceilings and Matt’s decorating,” said Bev Maley, who has taught for SoFul in both locations. “(Matt’s) done a good job of really making it a studio.”

Marsh didn’t do it alone. Along with input from Safrit, who has practiced yoga for years, Marsh brought in yoga teacher and consultant Diane Cevallos during the process and also worked with Sandy Raper to develop programming for the Railwalk studio.

“I’ve learned you surround yourself smarter than you,” Marsh said. “… My goal was to give people the best experience possible.”

SoFul Yoga and Wellness at Railwalk held its first in-person classes in February with a number of COVID-19 precautions in place.

“We wore masks for the first three months,” Maley said. “Everyone who walked in the door was masked. We took temperatures. We were being really careful and we still are. We’re still sanitizing everything at the end of the class.”

With the pandemic ongoing and vaccine rollout in its early stages, many were still hesitant at first to return.

“Initially it was a challenge to get people back in,” Marsh said.

Still, those who were confident in returning to the studio found the camaraderie comforting.

“It felt good to have community again,” Maley said. “As people started coming and they would say after class, ‘Oh my gosh, this is so wonderful to have live people next to me.’”

As more people have come back to SoFul or started for the first time, Marsh has expanded the number of classes offered. There are currently about 10 instructors who teach more than a dozen classes weekly.

“Our average class size now is 10 people,” Marsh said. “I’m very pleased with that. That class average is very good right now, considering the fact that we’re still in the pandemic.” 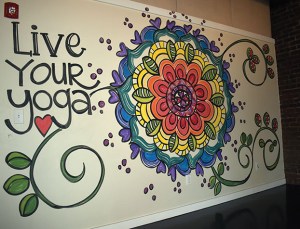 Marsh is also pleased with the reviews that have been left about SoFul on the Mindbody app, which is used by people across the country to locate and make appointments for yoga classes. The app, Marsh said, is utilized by people who are traveling to find yoga on the go.

“We’ve gotten great reviews from people all over the United States,” Marsh said. “You can read the reviews and they’re great. I’m just astonished.”

SoFul has added more offerings outside of traditional yoga classes. The studio hosts workshops covering a number of topics on a monthly basis as well.

More information about SoFul Yoga and Wellness at Railwalk can be found online at www.sofulyoga.com.