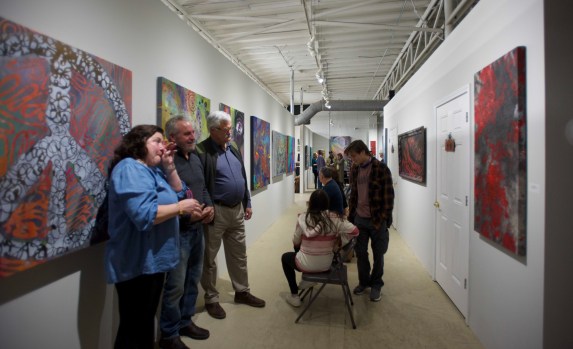 Carl Blankenship/Salisbury Post - Mike Ploplis stands between Susan and Joe Fowler as they see "Seasons of the Soul" in person for the first time. The couple won the auction for the piece, one of three Ploplis pieces sold to benefit Concussion Legacy Foundation. 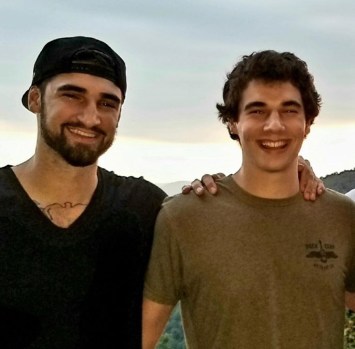 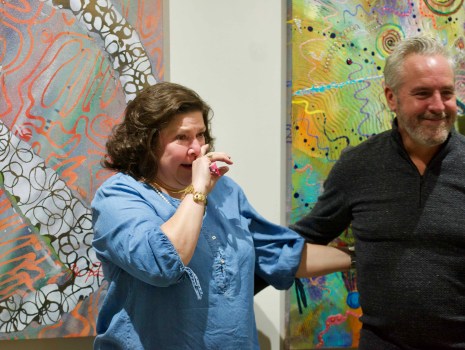 Carl Blankenship/Salisbury Post - Susan Fowler tearing up next to Mike Ploplis seeing the piece "Seasons of the Soul" for the first time.

SALISBURY — Something was happening in the background at Mike Ploplis’ first solo exhibition.

The Nov. 6 show at Rail Walk Studios and Gallery coated the walls with the work of the artist and flight paramedic. Mixed into his work, however, were three pieces — one by the entryway, another in the hall and one toward the back — with special significance to another local family.

The three paintings were auctioned off as part of Concussion Legacy Foundation’s 14th annual Gala on Oct. 28. The three pieces are contemplations on mental health and donated in memory of Buxton Fowler. The East Rowan High School graduate took his own life on Jan. 31 at age 26. He lived in Charlotte when he died. He was born in Tullahoma, Tennessee, and the family moved to Salisbury in 1999. He attended Rowan-Cabarrus Community College and worked as a crane operator.

Susan and Joe Fowler, Buxton’s parents, won the auction on the largest piece titled “Seasons of The Soul.” Susan cried and hugged Ploplis when she and Joe saw the piece in person for the first time at the exhibition.

Ploplis said he wanted to give back something with his art. His son and one of Fowler’s other sons played baseball together. The families became fast friends.

“They’re just great people,” Ploplis said, adding they are proud of their kids.

Ploplis said he heard about Buxton coping with mental health issues and trying to find his way. He created the paintings during Mental Health Awareness Month. They were named by Ploplis’ social media following, and he was never interested in selling them because he thought they would be better used to raise money for charity. He asked the Fowlers if the art could be dedicated to the memory Buxton. Susan directed him to the foundation and explained why it is important to the family.

“I was honestly shocked and floored the Concussion Legacy Foundation graciously accepted them as well,” Ploplis said.

Buxton had a daring streak. He loved motorcycles, riding and working on them. He liked to ride fast, too.

Susan said Buxton played sports in school, whether it was physical education class or soccer.

“It’s a wonder that child had any skin left on him,” Susan said.

Once when playing volleyball in gym class, Buxton was playing so hard he hit his head and was knocked unconscious. It was not his first concussion. All told, Buxton suffered at least 16 concussions the family is aware of. The injuries were caused by a mix of bad luck, risk taking and a phenomenon that makes people more prone to concussions the more they endure.

Buxton was about 10 when he suffered his first concussion. The Fowlers were leaving Walt Disney World. Buxton got out of their van to help Joe with luggage, slipped in a puddle and hit his head.

The family called an ambulance and rushed him to a hospital. Buxton said he could not feel his legs, and he never recovered the memory of seeing Shamu at SeaWorld during the trip.

One concussion while playing soccer caused temporary hearing loss in one ear. Another caused him to lose his ability to walk days after the injury and resulted in a hospital visit.

After the family learned protective headgear was permitted, Susan and Joe made Buxton wear it. They made his younger sister wear it from the start, and she never suffered a concussion.

The Fowlers also took Buxton to a pediatric neurologist after the head injuries started. Joe said the doctor told them Buxton would need to be careful if they did not want him to live in a bubble.

Toward the end of his life, Buxton was certain he was developing chronic traumatic encephalopathy, or CTE. The neurodegenerative disease most commonly associated with athletes receiving repetitive head impacts.

Buxton started experiencing shaking in his hands and short-term memory loss among other symptoms that told him something was wrong.

Buxton was an organ donor, and Joe was determined to find somewhere that could accept Buxton’s brain for study. When Buxton died, his brain was donated to the VA-BU-CLF Brain Bank via the Concussion Legacy Foundation. The bank is the largest of its kind studying traumatic brain injuries and CTE. It’s a partnership between the U.S. Department of Veterans Affairs, Boston University and the Concussion Legacy Foundation.

Buxton was among the first 1,000 donors and is considered a “legacy donor” as a result. The turnaround on Buxton’s analysis was about a year.

Dr. Thor Stein, a neuropathologist for the V.A. Boston Healthcare System and professor at the Boston University School of Medicine, said there was pathology for CTE in Buxton’s brain, but his case was unusual because he did not fit the mold of an athlete who had played a tackle sport like football for years.

Joe said he does not think the researchers have seen a case like Buxton’s before. He suspects there are no professional football players who suffered the number of serious concussions Buxton had.

“They’d never seen a child with so many serious ones,” Joe said. “They’d seen people that had repetitive, small ones. So, it made a unique thing for them. One of the hopes we have is that it will lead them in some other directions.”

The Fowlers encourage parents to take a few measures to protect their kids when playing sports. Among them: protective head gear is important for sports that allow it. Rest after suffering a concussion and baseline neurological exams are also important, the Fowlers said.

Baseline tests establish what is normal for an individual as a point of comparison if they suffer a brain injury in the future.

Buxton’s cause of death was a self-inflicted gunshot wound. Stein said a single penetration wound disrupts the tissue it goes through and causes secondary damage, but the building of protein pathologies the bank looks for are not affected by acute injuries.

Researchers did not get all of Buxton’s brain, but tissue they received show pathological features for CTE, which is the buildup of a misfolded protein called “tau.” The protein misfolding has been attributed to repetitive trauma in athletes, veterans and others. When it malfunctions, it spreads through the brain, kills cells and causes the brain to degenerate.

Stein said it was clear in Buxton’s case he was developing CTE because of the particular tau buildup pattern associated with the disease in his brain. Stein said the exact mechanism that damages cells and causes the protein buildup is not understood.

“When we then showed the pathology, we were all quite surprised,” Stein said, adding the biggest predictor for CTE is the number of years playing certain contact sports. Buxton, however, had a lifetime of risky behavior and accidents.

Susan said some of Buxton’s daring nature was due to bipolar disorder and depression. According to the National Institute of Health, people with bipolar disorder tend to be impulsive, and risk taking is a diagnostic metric for manic episodes.

Buxton sought out his own psychiatrist and counselors. Susan said he was sensitive to mood medications and did not like the side effects, but he tried to get as much help as he could.

Stein said many people who donate to the brain bank had mental health issues, with or without a family history. The question is often whether CTE is part of the issue or an underlying cause. Stein said Buxton had long-standing mental illness issues.

“We have a number of ongoing hypotheses, none of which we have really great data for,” Stein said, noting one is the possibility that repetitive head trauma could worsen mental illness.

Phone call was the difference

In June, 2019, Buxton wrote a post on Facebook directing donations to the National Alliance on Mental Illness and asking people to reach out to someone they know who is struggling.

He described being diagnosed as type two bipolar a few years earlier and stretches of being so depressed he would only leave home for work for months.

Buxton described calling the National Suicide Hotline in 2017 and being put on hold, twice. He hung up and tried to shoot himself, but the gun misfired. A friend he had not spoken to recently called him a few seconds later.

“This phone call was the difference between me pulling the trigger a second time and me sitting here a year-and-a-half later about to turn 26,” Buxton wrote.

He said his family was unbelievably supportive and his biggest support system. Susan said he would sometimes go to his parents’ house for support, but never wanted them to come to him. Driving gave him something to focus on when he was at a low point.

“He knew he could call me any time of the day or night, and he did,” Susan said.

Susan said Buxton was also willing to bend over backward to help people. Before he moved out of his parents’ house, he came home after finishing third shift exhausted and went straight to bed. He almost immediately turned around and walked back out the door. Buxton said a friend’s little brother called him. Buxton told the boy he would help him if he needed anything, so he went.

Susan said she likes to talk about her son because it keeps his spirit alive. She likes to remember funny stories about him and his friends. She said Buxton fought his entire life.