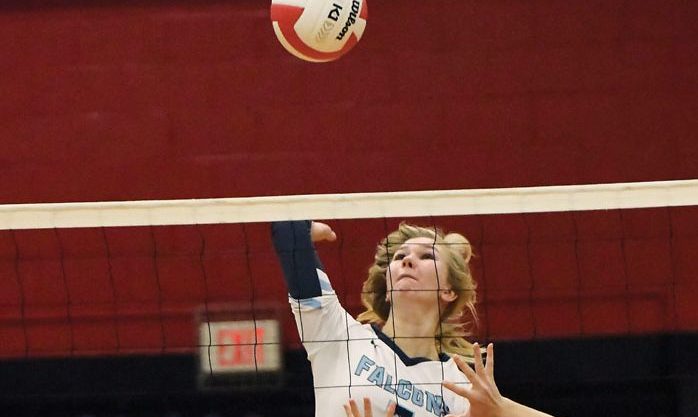 West's Kelcie Love, who had 304 kills as a captain for the Falcons, is heading to Catawba and will also play beach volleyball there. File photo by Wayne Hinshaw, for the Salisbury Post

MOUNT ULLA — Consistent and versatile, West Rowan’s 5-foot-10 senior Kelcie Love was the best player on the best team and is one of the Post’s co-players of the year for the volleyball season.

Love totaled 304 kills as a captain for a 27-3 team that ran the table in the South Piedmont Conference and then made a surprising charge to the fourth round of the 3A state playoffs.

“Except for Emma Clarke, we didn’t have anyone who you would be looked at as tall,” Love said. “But in the playoffs, we beat teams that had a lot of tall girls. We made a good run at it.”

Love’s number of kills was strong, but the underlying numbers were stronger. She had a 44.8 kill percentage, so she was a very high-percentage option for setter Noe Gaeta.

There are times when still trying for the kill without an ideal set isn’t the smartest play, and Love almost always played smart.

“She was a terminating factor for us in the middle, but we also used her outside and right side,” West head coach Jan Dowling said. “She was versatile and she was our big offensive player, our go-to. Always steady.”

Love is from an athletic family. Older brother Austin is a well-known baseball player who starred at West Rowan and for the University of North Carolina and was a pro draft pick last summer. His success helped drive Kelcie to excel.

“Every time I’d see my name in the paper when I was a freshman, it was like, ‘Kelcie Love, who is Austin Love’s younger sister,'” Kelcie said. “So I really did want to make my own name.”

She grew tall early, towering over her elementary school friends. Basketball seemed like a perfect sport for her, but that didn’t work out.

She tried softball along the way.

She discovered volleyball around fifth grade.

“Because the other girls were doing it, my friends were playing, and it was the trendy thing,” Love said.

She reached 5-foot-7 in middle school and was projected to be over 6 feet tall.

“About the eighth grade,that’s when I started taking volleyball more seriously,” Love said.

Her growth, as far as inches, stopped at 5-foot-10 when she was a freshman, but she made West’s very strong varsity team that year.

“I was the youngest one on the team and scared half to death,” Love said. “We had Tori Hester, and seeing Tori play, I could see how much better I would need to be to get on the court.”

Love contributed 52 kills as a freshman. She bumped that to 136 kills as a sophomore. She had 140 in a junior season that was truncated by the pandemic.

“The volleyball team trained with (West Rowan football legend) K.P. Parks, and I tried to become as fast and as strong as I could,” Love said.

While she left basketball and softball behind long ago, she has competed in soccer and swimming for the Falcons.

Love hasn’t made a college commitment yet, but she does have aspirations to play volleyball in college and continues to compete with her club team in Charlotte.

COVID impacted her recruiting quite a bit. That junior season is a big one recruiting-wise, and hers was deeply affected.

“About 80 percent of the club tournaments were canceled that year,” Love said. “But I do want to play somewhere in college. I’m still trying to get the ball rolling.”

It won’t hurt her to have South Piedmont Conference Player of the Year on her list of accomplishments.

She’s gotten some looks and she’s had some offers. Now it’s matter of finding the right fit.

There’s more to it than just volleyball. There’s finding a campus with the right vibe and finding the right group of coaches and future teammates.

“She’ll find a home,” Dowling said. “She’s not just a great player, she’s a great person and a great teammate.”