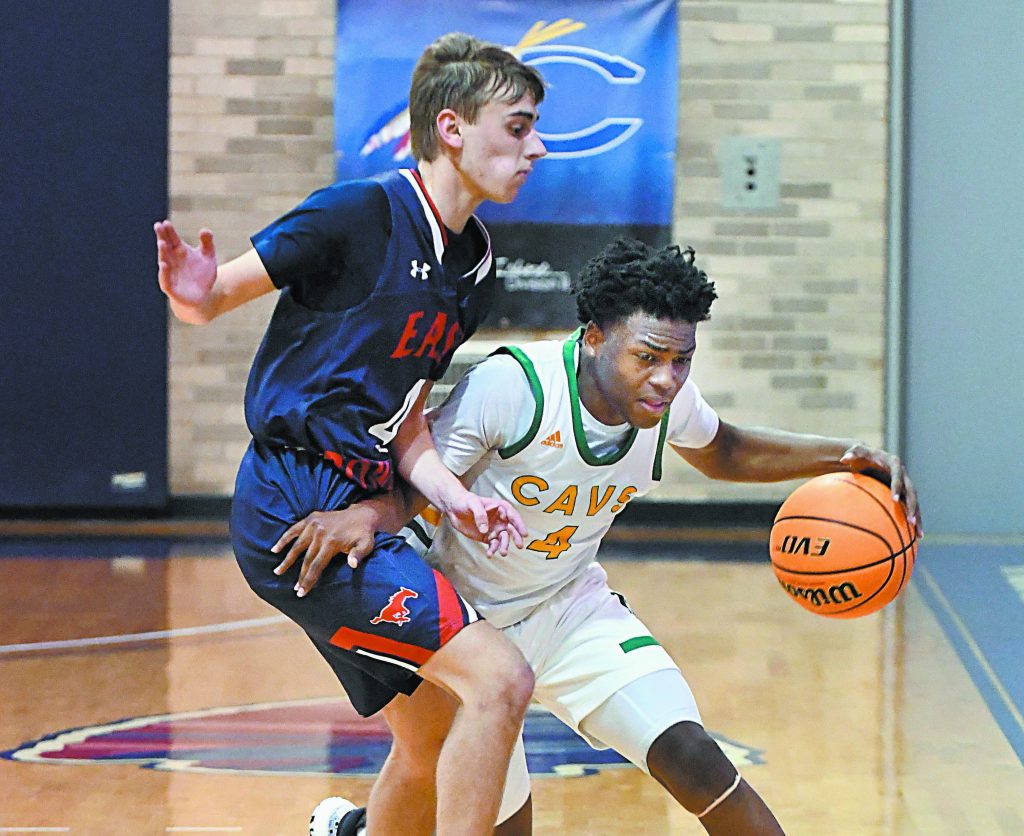 North Rowan’s Quashawn Carpenter (4) will be a key senior for the Cavs this season. File photo by Wayne Hinshaw, for the Salisbury Post

Tenth in a series of reports on local basketball teams …

The Cavaliers were hammered by the COVID partial season as much as anyone. Their final record of 6-6 included a four-game losing streak early, but it also included a five-game winning streak late.

“We were playing much better basketball at the end,” head coach Jason Causby said. “But it was only a 12-game season, and 12 games is normally when things are just getting started. We only had one time through our conference. If we’d had a second time through the league, I’m confident we would have beaten some teams that beat us the first time.”

All water under the bridge now. The Cavaliers move on.

It’s a safe bet they’ll be better than they were last season when Causby constructed a team around his only two experienced players — point guard Quashawn Carpenter and veteran Kendrell Goodes.

Now the Cavaliers still have Carpenter to run the show, and they’ve got several exceptional athletes who played a lot of minutes last season.

Carpenter averaged a team-best 11.3 points per game, including a 27-point breakout against Albemarle. He could be one of the county’s best players.

“He’s smart and heady, stocky and strong,” Causby said. “He can shoot the 3, and he can get to the basket and finish. He’s our guy, and he knows he’s our guy. We’ll go as he goes.”

North’s No. 2 scorer last season was Derrick Hanson, a 6-foot-4 wing player who averaged 8.8 points. He could have a stellar senior season.

“He’s an explosive, rangy guy who stays in the gym all the time,” Causby said. “He loves the game and he’s gotten stronger in the last year.”

North’s third senior is Pharrell Hailey, who did not play last season. He’s big and muscular at 6-foot-5. The Cavaliers are looking for rebounds and presence from him more than points.

“He could anchor the middle for us,” Causby said. “He’s rough on the boards, an enforcer.”

North has an unlimited amount of athletic wingmen in the 6-foot-2 to 6-foot-3 range.

Juniors Amari McArthur and Kemon O’Kelly, football receivers who recently joined their basketball teammates, are almost bookends physically. The abilities that made them effective in football translate well to basketball.

McArthur, who averaged 7.7 points with five double-figure outings as a sophomore, probably drives it a little stronger. O’Kelly, who had a high of nine points last season, might shoot it a little better from outside.

“Amari can be huge on the offensive boards for us and he can defend at any position,” Causby said. “Kemon is playing a lot more confidently than last season. He could be a Brevin Goodlett type of player. He brings a jolt of energy. He’ll try to dunk it on you.”

Darell Carpenter, a 6-foot-3 junior, is another long, slashing wing who will hit the boards. He started the opener, a 57-51 win against Carson.

Naejone Whitney, a 6-2 junior wing, had a super summer and propelled himself on to the radar.

“He came out of nowhere, but he might have been our summertime MVP,” Causby said. “He moves with some elasticity. He’s long and tough.”

Junior Naz Stinson is an energetic combo guard. He nailed a big 3-pointer in the opener.

Jalen Smith, a 6-foot-3 junior guard is a catch-and-shoot guy and a potential zone-buster.

Jerome Blakeney, a 6-foot junior guard, is one of North’s best on-the-ball defenders. That’s a trait that usually gets you on the floor quite a bit.

Carlos Williams, yet another member of the deep junior class, is a stocky combo guard. He averaged 4.8 points last season, including an 11-point night against Thomasville.

Amir Alexander got some varsity time as a freshman last season. He wasn’t quite ready for the speed of varsity action, but now he is.

“He might be our most improved guy,” Causby said. “He’s got a serious mid-range game, which is kind of a lost art. He’s got a nice pull-up and a nice step-back. He’ll be a tough cover for our opponents. He can be a streaky scorer.”

Another sophomore, Jae’mias Morrow, the talented football running back, will be a key distributor and penetrator at some point.

“He’s a slick ballhandler, and he’s a guy we’ll lean on heavily after Quashawn graduates,” Causby said. “He plays basketball like he does football. He can squirm through the holes and get to the basket.”

Put it all together and the Cavaliers should be a tough out in the 1A state playoffs. This won’t be a team that you can stymie simply by creating half-court tempo and playing zone defense.

“We’re not only athletic, this should be the best shooting team I’ve had since I’ve been at North,” Causby said.

North couldn’t shake Carson on opening night, but the Cavaliers did maintain a lead and won by six against a 3A team that also figures to be much improved.

“That first win can be the hardest sometimes, and if you don’t get it, it can lead to three losses,” Causby said. “We’d only had one day of practice with our football guys, so we didn’t execute very well and we had lapses that helped Carson stay in it, but we never stopped playing extremely hard.”

The victory against Carson was the 228th for Causby, who trails only Hall of Famers Mike Gurley, Sam Gealy, Bob Hundley, Bob Pharr and Walt Baker (231) on Rowan County’s all-time wins list.

South Davidson (28 miles) and Thomasville (27 miles) will be the longest CCC trips.

It’s a tighter 1A/2A combination conference that includes three fierce and familiar rivals. North’s home-and-home battles with Salisbury, Thomasville and Lexington will be fast and furious. Thomasville is 1A now, so those contests will be especially important for North’s playoff seeding.

“Potentially, we’re good, but that doesn’t mean we’re good yet,” Causby said. “It takes a lot of playing hard, a lot of teamwork and a lot of discipline to be good.”