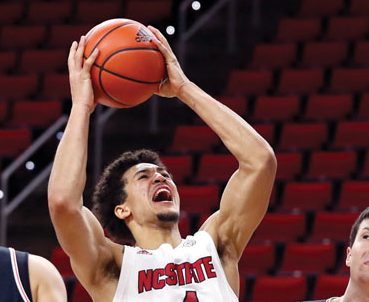 Jericole Hellems scored 31 points for the Wolfpack on Saturday. File photo courtesy of the ACC

All five starters reached double figures for N.C. State (5-1), which is undefeated at home. Casey Morsell and Cam Hayes scored 14 points each — Hayes with five assists — while Dereon Seabron and Ebenezer Dowuona scored 10 each.

The Wolfpack forced 14 turnovers while committing just six themselves and had 10 steals while scoring 20 points off Louisiana Tech miscues.

Kenneth Lofton Jr. poured in a career-high 30 points with a career-best 18 rebounds for Louisiana Tech (4-2), which saw its four-game win streak end.

Hellems drained back-to-back 3s, the second off a Seabron steal, as N.C. State jumped out 8-2 and led the rest of the way.

DESTIN, Fla. — Efton Reid scored 14 points and sparked a big first-half run and LSU breezed to a 75-61 victory over Wake Forest in the championship game of the Emerald Coast Classic.

Wake Forest led 11-6 after a 3-pointer by Khadim Sy with 12:18 left in the first half, but Reid slammed home a dunk that seemed to spark the Tigers (7-0). Tari Eason followed Reid with a bucket and two free throws and Brandon Murray, Xavier Pinson and Alex Fudge all hit 3s to cap a 15-0 run.

The Demon Deacons (6-1) closed to within three points, but Eason hit a 3 to start a 7-0 spurt and LSU led 31-21 at halftime. The Tigers’ lead never dropped below nine after intermission.

Williams scored seven of his game-high 24 points in overtime as Wake Forest held off Oregon State 80-77 Friday night to advance to the championship game.

Michael Jones had 15 points for the Wildcats (4-2). Desmond Watson scored 11 points, while Luka Brajkovic pitched in with 10 points and eight rebounds.

Kahliel Spear had 15 points and nine rebounds to pace the Colonials (0-5).

Karree Smith had 16 points for the Builders, members of the USCAA.

Jay Estime had 10 points to lead the Hawks.

The Wolfpack (6-1) played stellar defense, holding the Cougars to 26% shooting from the field.

N.C. State built a 14-point halftime lead as Johnson, who made 10 of her 16 shots, had 13 of her points before the break. Washington State (4-1) hung around for most of the third and only trailed 39-28 before the Wolfpack closed the period by scoring the final 10 points.

Elissa Cunane had half the points during the closing burst and finished with nine points and 10 rebounds.

The Wolfpack routed No. 2 Maryland on Thursday in the tournament opener and are poised to move up in the AP Top 25 on Monday.

The game was played at the Baha Mar resort in the Bahamas in a converted ballroom.

N.C. State visits No. 4 Indiana on Thursday in the Big Ten/ACC Challenge.