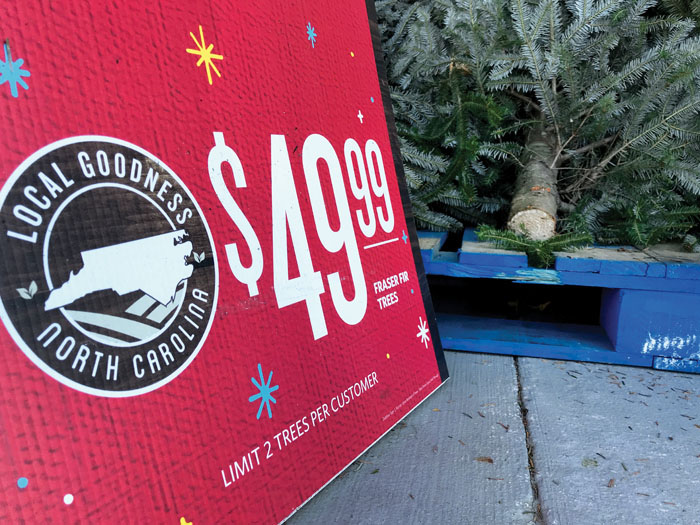 I drove by the first Christmas tree lot I have seen this season, and that got me thinking about all of the farmers that make holidays in North Carolina possible. Behind the scenes, farmers work all year round to make sure we have the most beautiful trees at our stands and the best seasonal produce. I don’t think the holidays would be the same without North Carolina’s farmers’ contribution.

North Carolina ranks second in the country for Christmas tree production with approximately 1,300 farmers using 40,000 acres of land, mostly in western N.C. These trees are shipped to be sold all around the world and loved by many. Some have even been displayed at the White House before! One out of five real trees sold in the U.S. was grown on a N.C. farm which is something to be proud of! On average, the tree you buy from a lot was grown over the course of 5-10 years depending on its size.

Chances are you’ll be cooking either a Christmas ham or a Christmas turkey this season. Well, you’ll be excited to know that there’s a pretty good chance both come from our state. North Carolina ranks second for both turkey and hog production. In N.C., there were 32.5 million turkeys grown in 2018 or about three turkeys per person in N.C. In the same year, our state produced over 9 million hogs. The majority of this production is in the southeastern part of the state. With all this taken into account, turkeys and hogs produced in N.C. account for around 5 billion pounds of meat.

Now take a moment and imagine what the holidays would look like without those astounding contributions from farmers in our state. Chances are the holiday traditions you’ve spent years, if not decades, cherishing would not have been possible without the silent contributions the N.C. farmer makes. So, the next time you meet a farmer, thank them for the hard work they put in to feed their communities, state and world.

Cody Craddock is an ag/natural resources agent with the Rowan County Extension.

Ann Farabee: Seed is all we need