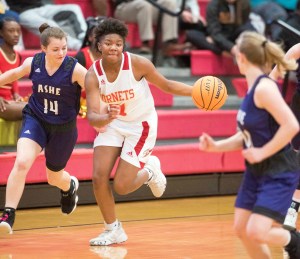 North Surry was patient, making several passes on every possession, and the Hornets shot a low percentage.

The Hornets also survived some free-throw struggles in the low-scoring contest.

Kyla Bryant played with a sprained wrist. Haley Dalton is out with a concussion.

“We didn’t play our best, but we still came out with the win,” Brice said. “I’m excited that we won.”

Salisbury plays at 2:30 p.m. Saturday against Apex Friendship, a strong 4A with Stanford recruit Indya Nivar.