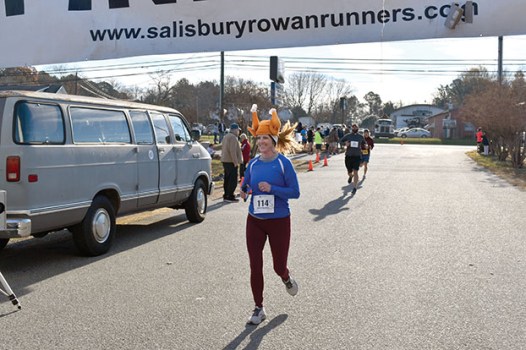 A turkey hat didn't slow this runner as she crossed the finish line, completing the Butterball 5K. Not only did runners get a jump-start on working off Thanksgiving calories, but they also helped support Prevent Child Abuse Rowan. Ben Stansell/Salisbury Post 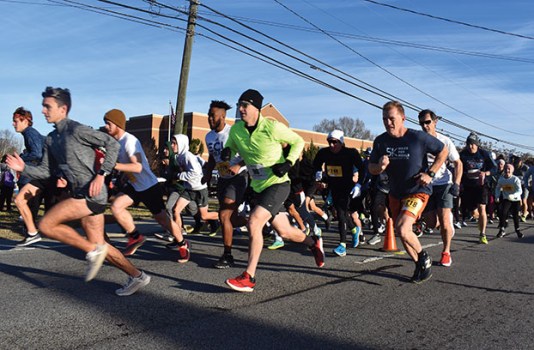 About 300 runners participated in the Butterball 5K, a large increase from when the race first started more than a decade ago. Ben Stansell/Salisbury Post 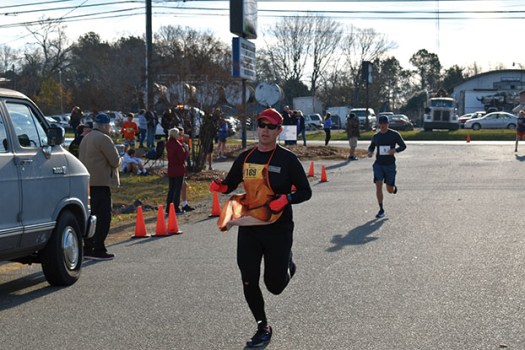 One runner was dressed for both the 5K and the kitchen. Ben Stansell/Salisbury Post 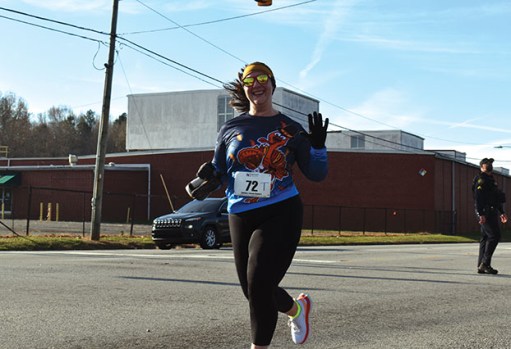 A festively dressed runner makes her way to the finish line during The Forum's Butterball 5K race. Ben Stansell/Salisbury Post

SALISBURY — Living in Charlotte, Steve Staley has plenty of Thanksgiving Day races to choose from that are just a few miles away.

But on Thursday morning, the seasoned runner woke up and drove to The Forum in Salisbury to compete in the fitness center’s 14th annual Butterball 5K.

“This race up here is worth the drive,” Staley said.

Staley was one of 283 runners who gathered at The Forum at 8:30 a.m. on Thanksgiving Day to burn off the calories soon to follow. Starting in front of the gym, the runners trotted down South Main Street to Airport Road where they turned around and raced back. The race was hosted with logistical support from the Salisbury-Rowan Runners, a 40-year old club that holds a number of local 5Ks and other races.

Crossing the finish line were fleet-footed teenagers and swift seniors. Parents pushed children to the end in strollers and a few runners donned Turkey hats or Thanksgiving-themed aprons.

When Staley crossed the finish line, he completed his 1,535th career race. The 67-year-old started running seriously at the age of 22 and 257 pounds to preserve his health. He’s participated in 47 marathons, including the famed Boston Marathon, and 70 half marathons, tallying 86,000 miles altogether.

Staley said he decided to make The Forum’s Butterball 5k race his Thanksgiving tradition because he enjoys the camaraderie, appreciates the way Salisbury-Rowan Runners hosts the event and because it feels good to support a good cause.

Since its inception, the proceeds from the Butterball 5K have gone to benefit Prevent Child Abuse Rowan.

Started as a grassroots effort in the late 1990s, Prevent Child Abuse Rowan is a nonprofit dedicated to organizing community child abuse prevention and education efforts. The organization operates the Terrie Hess House Child Advocacy Center, which serves as a child-friendly environment for victims of abuse.

“The proceeds from this race help us help the children of Rowan County that have experienced physical and sexual abuse,” Executive Director Shawn Edman said before the race. “We provide services to them free of charge and we help them get on a healthy journey to recovery. We treat a lot of children, sadly, and this race that you’re doing helps those children tremendously.”

“We had a long period of time where kids weren’t going to school, so they didn’t have that extra set of eyes on them,” Edman said. “Now that they’re back in school, teachers and other staff members may see injuries they’ve experienced or the children have someone else to talk to now so they’re telling their teachers or guidance counselors what’s happened to me. We’re glad they’re coming to us for help, it’s just unfortunate that there are so many right now.”

Edman served on the organization’s Board of Directors before becoming executive director earlier this year. Since he was hired for the job, Edman has worked to bolster the nonprofit’s services.

“(Edman) has literally taken the Terrie Hess House to the next level,” Board President Julie Chamberlain said. “We’ve got the best team in place and his leadership has been crucial as we’ve navigated our way through a pandemic.”

The organization is funded through grants and from charitable events like the Butterball 5K. Matt Marsh, co-owner of The Forum with Steve Safrit, is also a member of the Prevent Child Abuse Rowan Board of Directors.

Marsh said the Thanksgiving race has grown over the years. The inaugural race featured about 70 runners participated. For the first time this year, there were over 300 registered to run.

“With the help of the Salisbury-Rowan Runners Club and David (Freeze), we just kind of built from there and it became one of the largest races in Salisbury,” Marsh said.

Milton Matheny, who has coached cross country and track at Corriher Lipe Middle School, ran the race about a decade ago when it was much smaller. He was back on Thursday to compete again, but his favorite part of the event was seeing his former athletes participating as well.

At 56 years old, Matheny wasn’t looking to set any personal records, but he said that he was thankful to still be able to run it and help a good cause.

Sutton Webb of Salisbury was the women’s winner of the Butterball 5K with a time of 21:53. Jay Mazzone from Charlotte was the overall male winner with a time of 18:16.

Results from the race are available at www.salisburyrowanrunners.org.