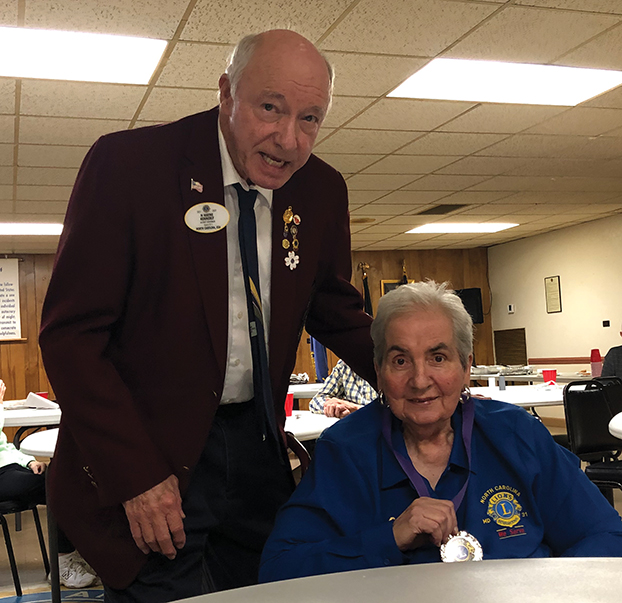 Lions Club District Governor Wayne Kennerly poses with Nellie Troxell after presenting her with the "unsung hero" award. Troxell has been helping with Salisbury Lions Club initatives and fundraisers for decades and is known for being dependable. Photo submitted.

SALISBURY — For somebody who is used to working behind-the-scenes, Nellie Troxell was shocked to have the limelight turned on her last week.

Troxell was recognized during a Salisbury Lions Club meeting with an “unsung hero” award, which was given for the first time this year to a member of the club whose work has gone under the radar but not under appreciated.

“She was so shocked she was speechless really,” said Karen Browning, Troxell’s daughter.

There to place the medal around Troxell’s neck was Wayne Kennerly, district governor for the Lions Club, a longtime member and former president of the Salisbury chapter. Along with the medal, the Salisbury Lions Club also presented Troxell with a dozen roses.

“I could always depend on Nellie,” Kennerly said. “When she was able to do something, she would do it.”

As district governor, Kennerly oversees a 15-county region of about 50 Lions Clubs stretching from Mecklenburg up to Alleghany. Most clubs this year submitted a name for the “unsung hero” award, which was the theme of the district convention in early November.

Troxell received the award 10 years after she officially became a member of the Lions Club, but her dedication to the club extends back decades. She started helping with the club by way of her position as secretary of the Harold B. Jarrett American Legion Post 342. The American Legion post and Lions Club have a significant amount of overlap. Not only do the two organization’s share members, but the Lions Club’s meetings are held in the Post’s building.

When Troxell started helping with the Lions Club’s fundraisers and events in the early 1980s, she wasn’t even technically allowed to be a member. Women were not eligible to hold membership until 1987. Nonetheless, Troxell could always be counted on to bring in funds by selling brooms for the club.

Troxell often had Browning place brooms near the front window at her family’s floor covering store in downtown Salisbury. The store, Piedmont Carpet Service, was located at 119 E. Innes St. and looked out over one of Salisbury’s busiest sidewalks and streets.

“I wish I would’ve kept a total of how many brooms that woman sold,” Browning said.

Money raised from brooms, which the Lions Club still sells today, help the club accomplish its primary mission: to improve the lives of the visually impaired and prevent avoidable blindness.

Troxell played a direct role in those initiatives as well, working on the club’s “vision van” to conduct mobile testing to catch potential signs of eye problems in children at an early age. Troxell also collected used glasses that were refurbished and donated to those who couldn’t afford to buy new ones.

During the club’s annual golf tournament, its biggest fundraiser of the year, Troxell helped out by serving food to golfers or spotting holes. When club members gathered outside of Walmart to raise money by selling sweets on “candy day” each year, Troxell was there too.

“Anything she could do to help us, she’d do it,” Kennerly said.

Troxell and her late husband, Vernon, raised their three children as volunteers as well. Browning said she’s always been inspired by her mother’s “go getter” attitude and remembers tagging along with her parents to the club’s fundraising events as a child.

“They did things that involved the family,” Browning said. “I was thankful to grow up in that era, really, because that’s all we knew. We were kept busy and it was for the good.”

Having seen firsthand the impact her mother has had on the community, Browning said she was excited to see Troxell honored with an award.

“It warmed my heart. It really did,” Browning said. “There are so many out there that have contributed to help and I didn’t want to put her on a pedestal per say, but it did warm my heart. She has a true passion for anything she’s ever done.”

Troxell had a stroke several years ago and is wheelchair bound, but Browning still drives her to the Lions Club meetings twice a month. Kennerly said she has a better attendance record than just about anyone in the club.

Troxell might not peddle brooms door-to-door anymore, but she’ll still sell you one if given the chance.