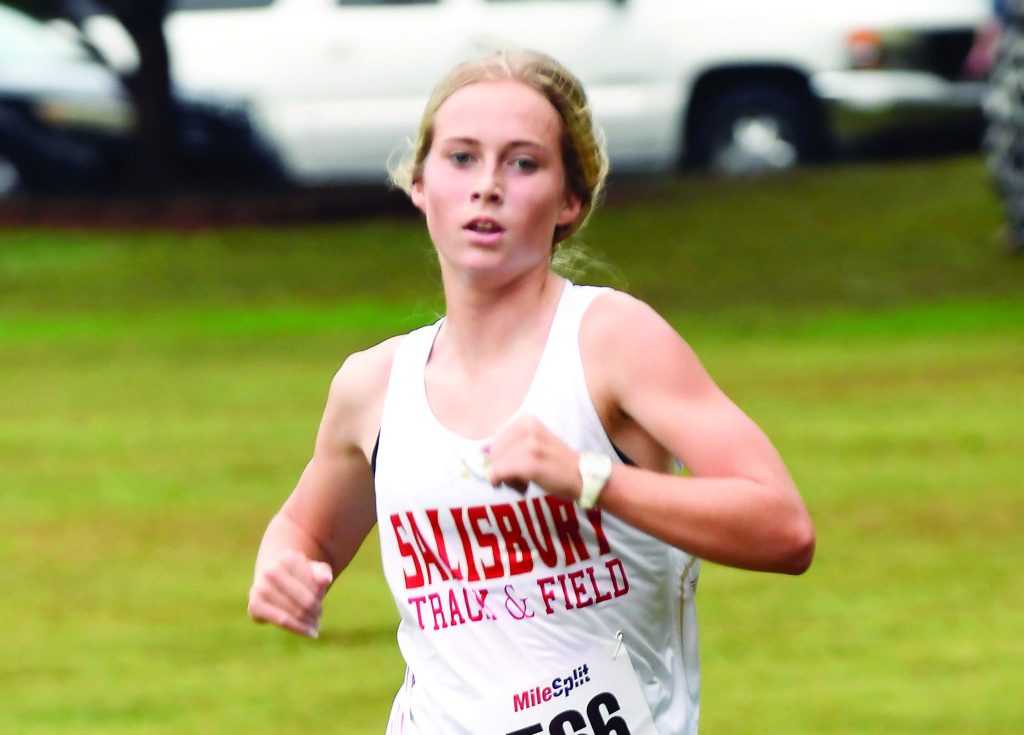 Sutton Webb added a new honor to her growing list with the top county cross country runner. File photo by Wayne Hinshaw, for the Salisbury Post

SALISBURY — At Salisbury cross country practice, some of the boys got passed by a girl, but they weren’t upset by it.

Everyone has figured out by now that senior Sutton Webb, the Post’s Rowan County Runner of the Year for the first time, is a special athlete.

For Webb, the recent University of Georgia soccer signee who will break goal-scoring records this spring, running sports are a competitive, healthy hobby, a means of cross training and staying in shape for her main endeavor. Still, she’s grown proficient at cross country, as well as several events in track and field.

Webb’s cross country times aren’t spectacular or elite. They’re just very solid. But for a soccer-first player who’s doing this on the fly, who’s been doing this for just two years, they’re stellar.

To put it in perspective, imagine someone swimming or wrestling or playing golf or tennis only during the season — and being the best in the county.

Former Salisbury cross country coach Sallie Pittman recruited Webb, who competed in basketball and tennis in addition to soccer in early high school days, to fill out the team.

“I knew she was the type of athlete who will improve any team she’s on,” Pittman said. “If you meet her, she’s so nice, but there’s a different persona that comes out when she’s competing. She can be fierce on the field.”

Webb gave the Hornets five runners, the minimum to post a team score. She had zero cross country experience, but she pushed her limits. She’s not the sort of person who is going to go through the motions. She ran in her first Rowan County Championships in September 2019 and placed third behind two accomplished runners — East Rowan’s Adalie Harrison and Carson’s Taylor Conrad.

As a junior, Webb didn’t get to run in the Rowan County Championships. It was at the peak of the COVID nightmare, and that race had to be conducted in waves. Webb hadn’t run in a Salisbury meet yet because of her club soccer commitments, so she didn’t have a qualifying time. Since she didn’t have a qualifying time, she wasn’t allowed to run. It was a heart-breaking experience for her. She asked to run with her teammates, with her score not counting. That wasn’t permitted, either.

That dreary day could have discouraged her and chased her away from cross country for good, but Webb is a competitor, and that “DQ” would provide priceless motivation. She bounced back for a fourth in the Central Carolina Cross Country Championships. She was seventh in the 2A Midwest Regional. She ran 21:35 in the 2A State Championships to finish 26th in a field of 94.

As a senior, Webb has moved up quite a bit during what was basically a normal cross country season.

“She ran every race hard,” Salisbury coach Leah Huggins said. “She was a great competitor, a great person, a great teammate, a great friend. Anyone who comes in contact with Sutton Webb is better for it.”

Webb took her first title in Rowan County Championships on a soggy Thursday at Dan Nicholas Park in early October. Coaches had to make a tough call on whether to go or not. The course was saturated, but it didn’t rain during the race. Webb splashed through mud and puddles in 20:51, winning by 43 seconds.

“I got out front and I was able to stay there, even with some slipping and sliding,” Webb said.

That course is a little short, maybe 3 miles instead of the standard 3.1 miles, but Webb, who was clocked in 19:44, was thrilled with the win and not worried about the course measurement.

She’s never been overly concerned about what the clock says. He simple objective always has been to finish ahead of the people racing against her.

In the 2A Midwest Regional Meet held in Dobson, Webb was runner-up in 20:59. She finished behind West Stanly’s Natalie Almond, a Catawba recruit who clocked 20:21.

The 2A State Championships — Webb made the trip with Salisbury boys qualifiers Jake Denhard and Will Koontz — were conducted on a November day with less than ideal weather.

“A very tough day, not so much because of the cold, but because of the wind,” Webb said “That’s a very open course, run mostly on fields, with only some small stretches shielded by woods. When you were running against the wind, it was a challenge.”

Webb dealt with it. She wrapped up her cross country career with a 21:29 clocking and finished 27th.

She’s convinced cross country has made her a better, fitter athlete. Beyond that, it’s given her friendships that will be long-term.

The Rowan County Athlete of the Year as a junior, Webb soon will turn her focus to soccer, a sport in which she is All-State and already a two-time conference offensive player of the year.

Even with two soccer seasons fragmented by COVID, Webb has scored 82 career goals and added 27 assists.

She hopes to squeeze in a few track meets this spring between soccer efforts.

With last school year’s revised COVID schedule, track followed soccer, and Webb was able to do both. She’s the reigning county and conference champ in the 800 meters, an event where her unique combination of stamina and kick make her tough to beat.

Camden Corley and Makayla Borst, last season’s co-runners of the year for Rowan County, led the way for the Cougars.

Those two also were the swiftest Rowan runners in the 3A Midwest Regional held at Salisbury Community Park.

East Rowan’s young team, coached by Cris Leckonby, came on strong and edged the Cougars in the South Piedmont Conference Championships, the 3A Midwest Regional and the 3A State Championships.

The Mustangs, led by senior Meredith Bonner and freshman Leah Edwards, took second place in the conference behind Lake Norman Charter by placing five girls in the top 20. They also took second-place honors to claim a handsome plaque in the regional competition.

South Rowan’s Bethany Rymer and West Rowan’s Jenna Wheeler were individual qualifiers for the 3A State Championships. Rymer’s 21:44 was the best for the Rowan girls in the meet.