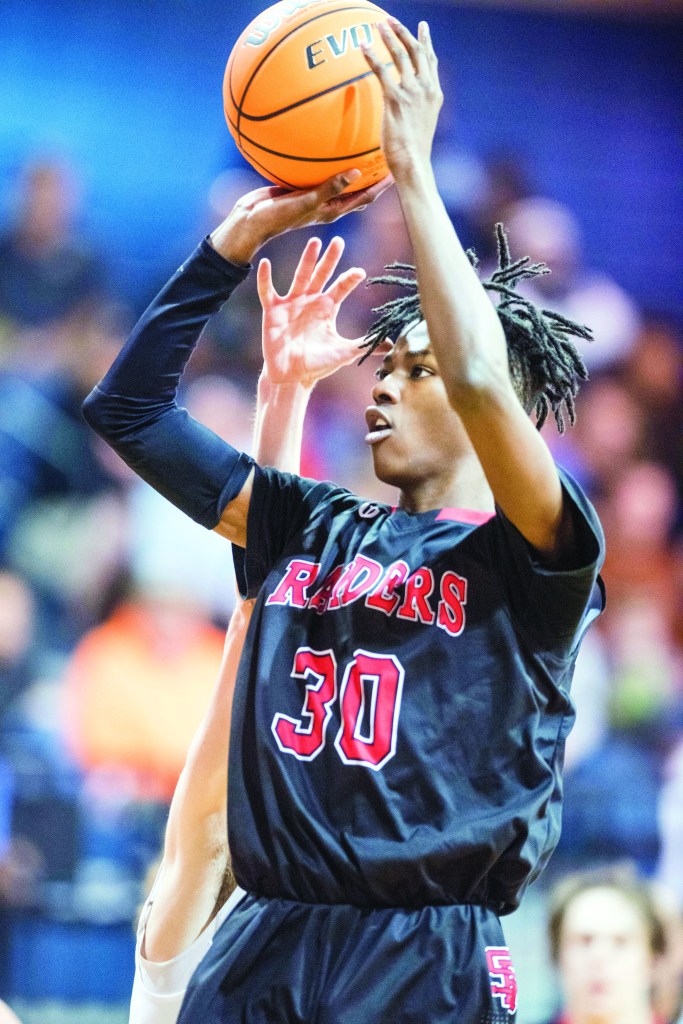 Ninth in a series of reports on local basketball teams …

LANDIS — South Rowan managed to squeeze four wins out of the shortened COVID season, and had a shot in some others.

Under the circumstances, it wasn’t a bad season.

But the Raiders are basically starting over now with an even less experienced roster.

There are only two returners — seniors Marcus Holloman, who averaged 8.3 points, and Jacob Ritchie, who averaged 2.1. Ritchie will miss some games with a football ankle injury, so that just leaves Holloman with varsity experience.

Holloman is a good player, a solid athlete and an accomplished track and field jumper.

“He can launch,” South’s second-year head coach Daniel Blevins said. “When he goes up, it doesn’t look like he’s coming back down.”

Holloman is a long 6-foot-3 and has worked hard to add wing skills to his raw athletic ability. He was coming on strong late last season and scored in double figures five times, with a high of 15.

He had a career-best 18 on opening night this season when South lost 91-65 at North Davidson.

South got a quickness boost last season from baseball standouts Nathan Chrismon, Kane Kepley and Ty Hubbard, but they’re committed totally to baseball as seniors. That includes the offseason workouts to prepare for championship aspirations in the spring.

“Totally respect that,” Blevins said. “They’ve got a chance to do big things in baseball.”

South went 19-70 in four seasons in 2A, so 3A is expected to be a challenge. Everyone in the South Piedmont Conference will probably be better than the East Davidson, West Davidson and South Davidson clubs that supplied South’s four wins last season.

Still, it’s hard to find anyone more positive or more upbeat than Blevins. He likes the players moving up from South’s jayvees and he actively recruited the hallways to get some of the school’s better athletes out for basketball.

Hunt sprained an ankle in a scrimmage right before the season started and will miss some early games, but he’s fast and bouncy. He had two kickoff return TDs in the football season, which says something about his athletic ability.

“He plays about 4 inches higher than his height,” Blevins said. He’s a good defender and he can elevate.”

Rucker is a thick, powerful guy  at 5-foot-9, 230 pounds. He brings muscle. He’s a potential mismatch for smaller guards.

Bradshaw also has a big body. At 6-foot-4, he screens well and Blevins has been impressed with his footwork in the post.

Pozyck has nice size for a wing player and also has speed and jumping ability. He’s potentially an aggressive, tough and physical defender.

Moving up from the jayvees are Dalton Young, Grayson McGuire, Aaron Jones and Richard Gould.

Young, a thin 6-footer, will be a very critical addition and will be counted on as the primary ballhandler. He’s got good quickness and has the ability to score in bunches. He poured in 32 on opening night at North Davidson where he mixed 3-pointers with three-point plays.

He’s taller, but his skills are remindful of Hunter Morrison, who excelled for the Raiders a decade ago.

“Dalton can drive and he can make 3-pointers when they back off, and he also passes it very well,” Blevins said. “If you get open, he’ll find you.”

McGuire is a good shooter.  Blevins is hoping to get some 3-pointers and some ballhandling assistance from him.

Jones is a 6-foot-1 sophomore who excels at cross country for the Raiders.

“He can run for days,” Blevins said. “He’s long and rangy and he can shoot it.”

Gould, one of the school’s tennis standouts, is smart and has good quickness. He’s another 3-point threat.

“Last season we had a team of drivers,” Blevins said. “We’d start out games OK, but teams would figure out we didn’t shoot it all that well and then they’d zone us. The hope is that we’ve got a better-shooting team this season and we’ll be harder to defend.”

Freshman guard Jadon Moore will be on the varsity. He and sophomore guard Zion Jackson will be factors when South wants to apply defensive pressure.