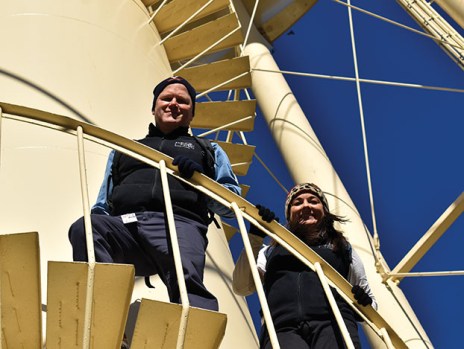 Jim Behmer and Jenny Lee look down as they ascend the many steps up the Salisbury-Rowan Water Tower. Ben Stansell/Salisbury Post 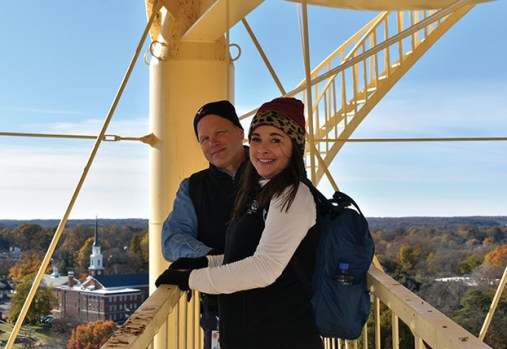 Rowan County United Way Executive Director Jenny Lee conquered her fear of heights to climbs well over 100 feet into the air as part of a fundraising stunt to help push the organization closer to its monetary goal. Ben Stansell/Salisbury Post

SALISBURY — Standing on a narrow yellow walkway more than 100 feet in the air, Jenny Lee yelled a message to Rowan County.

She isn’t coming down, Lee shouted, until the Rowan County United Way hits its goal.

Lee, executive director of the Rowan County United Way, marched up step after step to the top of the Salisbury-Rowan Utilities water tower on Tuesday afternoon as part of a daring stunt to help the organization reach its $1.5 million fundraising goal. United Way hopes to meet or surpass the ambitious tally by Dec. 1. The funds raised during the campaign are distributed to community partners who work to prevent substance abuse, improve mental health, promote healthy lifestyle behaviors and fulfill basic needs.

Lee was led up the water tower by campaign chair and Salisbury-Rowan Utilities Director Jim Behmer. While Lee won’t actually be sleeping at the top of the tower, conquering her fear of heights was difficult enough. The outcome of Lee’s expedition into the air can be seen during the campaign finale, which will be held at the F&M Trolley Barn on Dec. 1 at 11:30 a.m.