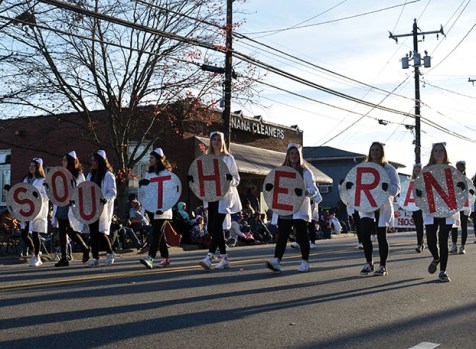 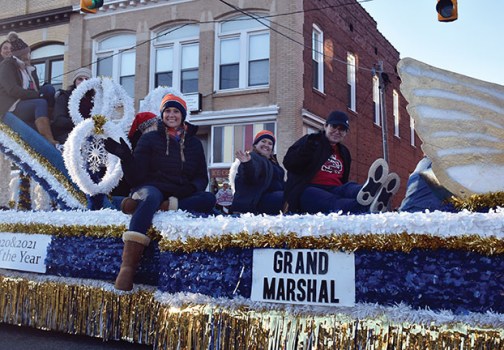 The grand marshals of the Southern Rowan Christmas Parade were teachers of the year from local schools. Ben Stansell/Salisbury Post 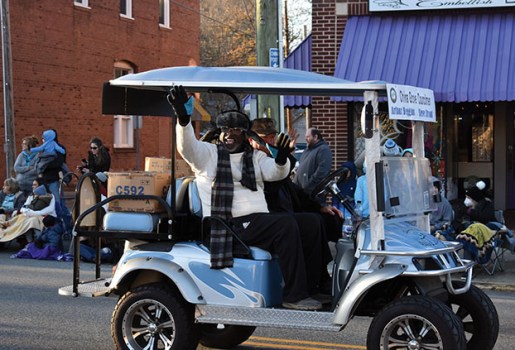 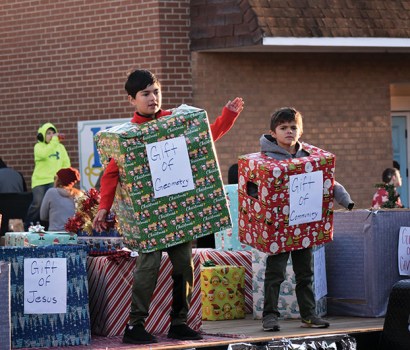 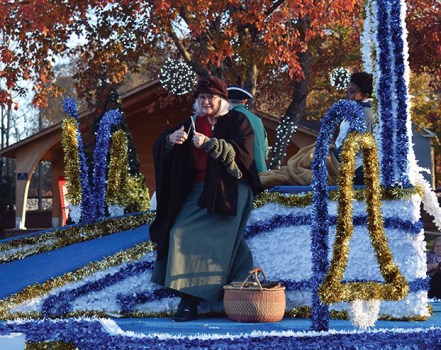 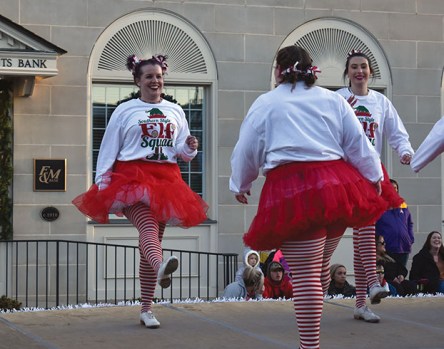 There were a number of dance troupes in the parade, including the Southern Style Elf Squad tap dancing group. 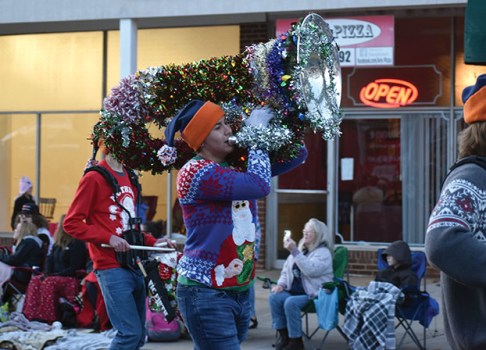 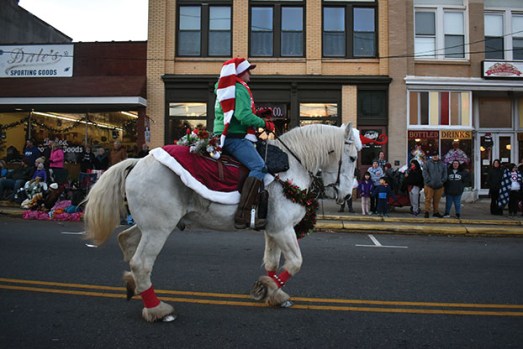 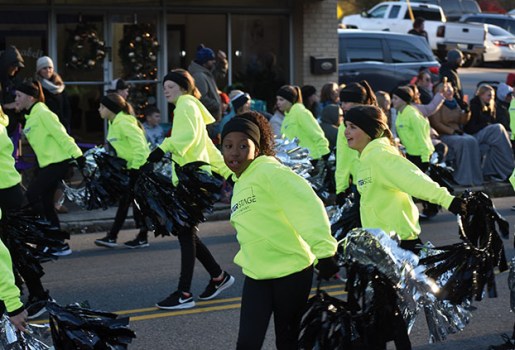 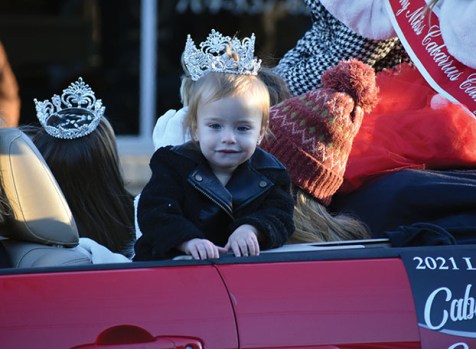 There were plenty of tiaras in the parade, worn by queens both young and old. Ben Stansell/Salisbury Post 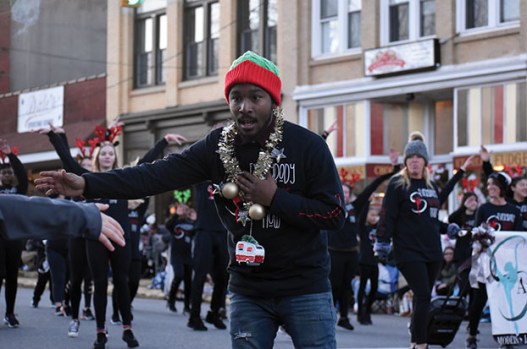 A man on roller skates reaches out for a high five from a parade spectator. Ben Stansell/Salisbury Post

CHINA GROVE — The last time Carolyn Wilson was at the Southern Rowan Christmas Parade, she was in the procession as a member of the South Rowan High School marching band.

On Tuesday evening, she was back. The recently retired Wilson watched the parade for the first time in decades, something she and her family did every year when she was a child. Along with her sister and her sister’s grandchildren, Wilson took in the sights and sounds of the parade once again from downtown China Grove.

She enjoyed every minute.

“I thought it was great,” Wilson said. “The kids enjoyed it and that’s what was important. They knew they were going to get some candy and wait for Santa. The beginning of it reminded me of when we were children and my parents would take us. So, it was fun.”

The Southern Rowan Christmas Parade brought holiday cheer to hundreds of people gathered on the sidewalks in Landis and China Grove as floats, antique tractors, dancers and Christmas characters marched through the towns.

The annual parade returned this year after it was not held in 2020 due to COVID-19 concerns, delivering the same entertainment that spectators have come to expect. Politicians waved from cars, trailers and golf carts, church groups smiled from bedazzled trailers and horses trotted down the street dressed for the holidays. One float had a snow machine attached to its back, which transformed downtown China Grove into a winter wonderland for a few minutes.

The parade has long been a joint effort between Landis and China Grove. The starting point of the route used to alternate between the two towns, but the parade has started in Landis for the past two decades. That was no different on Tuesday, when the route got underway at 3 p.m. in downtown Landis and restarted at the edge of downtown China Grove shortly after 4 p.m.

The Southern Rowan Christmas Parade holds a special place in Landis Mayor Meredith Smith’s heart. She grew up watching the parade with her family and helped to organize the event long before she became the town’s mayor.

“The parade is one of my most favorite days of the year,” Smith said. “It’s a lot of hard work put in by the town of China Grove and Landis and all the volunteers. But the morning I wake up and take that left off Hoke Street in Landis and come down Main Street and there are chairs already out for people who are going to come to the parade, it warms my heart.”

Smith said the strong turnout in Landis for the parade was an indication that people were happy to see it return after a year hiatus.

“I think the parade was wonderful,” Smith said. “We had a lot of entries and a lot of excited people sitting on the side.”

Friends Helen Correll and Patsy Parnell watched the parade from seats near the China Grove Fire Department. The two have been coming to the parade since they were children and participated when they were in high school. Parnell, who has worked as a substitute teacher in a number of Rowan County schools, said she enjoyed seeing some of her students go by in the procession. Correll and Parnell said they also liked listening to the high school bands go by and watching dance troupes perform energetic routines.

After the parade finished in China Grove, the town of Landis hosted its annual tree lighting ceremony. Although the town holds a tree lighting event every holiday season, this was the first time it was directly after the Southern Rowan Christmas Parade. In addition to the tree lighting itself, the town brought out a handful of food vendors such as Chick-fil-A and What-A-Burger.

“Everybody is here, everybody is bundled up and so if you’re already in town, you have to eat dinner,” Smith said. “My thoughts were that it would be a crowd and it did. It’s the biggest crowd we’ve had for the tree lighting thus far.”

Smith and the Landis Board of Alderman also held a brief dedication ceremony for the new mural that has been placed on the side of the Rowan County Sheriff’s Office facing Ryder Avenue.

Spencer and Salisbury will host their own joint holiday parade today. The ‘Tis the Season Spectacular is slated to start near East Jefferson Street in Spencer at 2 p.m. and reach downtown Salisbury around 3 p.m. The parade will be followed by a family-friendly holiday celebration at Bell Tower Green park.