Livingstone athletics: Lanier will be part of groundbreaking ceremony 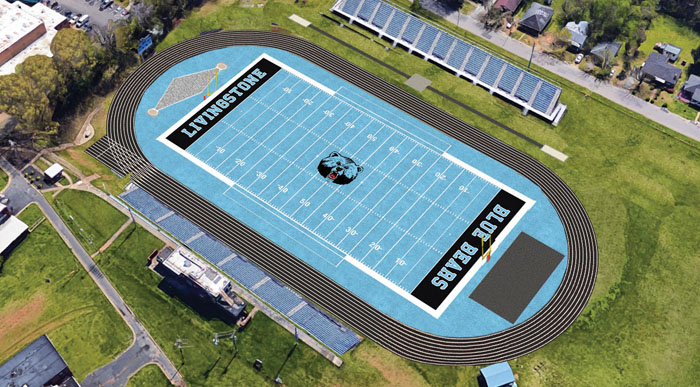 SALISBURY — The birthplace of Black college football, Livingstone College, will break ground on a new track and field thanks to support from Pro Football Hall of Famer Willie Lanier.

Livingstone College, which hosted the first football contest between historically Black colleges in 1892, will hold a groundbreaking ceremony on Tuesday, Nov. 30, at 1 p.m. to begin a full remodel of its track and field, converting from a grass to artificial turf painted in Livingstone blue, at a price tag of $2.8 million.

Lanier, a legendary middle linebacker for the Kansas City Chiefs from 1967-1977, will be among those participating in the ceremony. He is the catalyst for the upgrades, which will be the first improvements to the stadium in 20 years when the track was added and stands were installed on the visitors’ side.

Lanier founded the Willie Lanier HBCU Field of Dreams Program, which is managed by the nonprofit Honey Bear Project. His program collaborates with historically Black colleges and universities to provide financial support to make improvements to their athletic fields.

“Livingstone College is where it all began,” Lanier said. “What occurred on Livingstone’s front lawn nearly 130 years ago paved the way for people like me.”

The first intercollegiate black football game was played on Dec. 27, 1892, on the front lawn of Livingstone College between Livingstone and what is today Johnson C. Smith University. That game started a tradition of gridiron, grit and greatness among Black student-athletes.

The goal of Lanier’s HBCU Field of Dreams is to raise $50 million over the next three years with minimal cost to the 27 participating schools, and to bring HBCUs’ athletic facilities up to a competitive level by providing new turf football fields to programs playing on grass for more than 50 years, and resurfacing existing fields that are outdated and in dire need of repair.

“Through the Honey Bear Project’s initiative, we will increase the students’ level of competitiveness while also bringing awareness to the plight of HBCUs’ athletic programs,” Lanier said.

“Through this partnership, we are able to commence a long-overdue upgrade to our athletic field,” said Lamonte Massie-Sampson, Livingstone’s athletic director. “The timing could not be more perfect as Livingstone will celebrate and host the 130th anniversary of Black college football in 2022.”

Livingstone College President Jimmy Jenkins said the school is grateful to Lanier because of his work for HBCUs.

“This collaboration lessens the load for institutions like ours that are enrollment driven,” Jenkins said. “We are excited about the pride these improvements will instill in our student-athletes and our college family as a whole.”

In addition to the field, track upgrades will include the high ropes apron, throwers’ circles and jumping runways.

The public is invited.