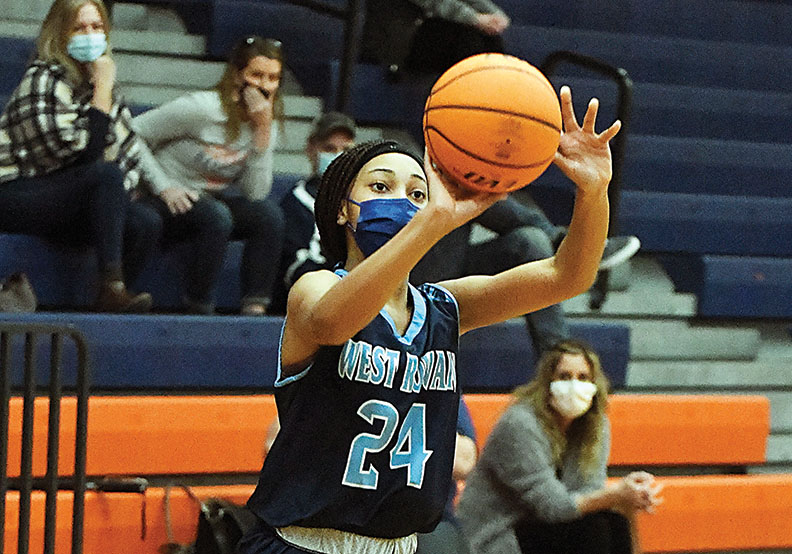 West Rowan’s Lauren Arnold shoots during a game against Carson last season. photo by Wayne Hinshaw, for the Salisbury Post

Seventh in a series of reports on local basketball teams.

They were ranked 48th in the state in the final MaxPreps rankings— that’s 48th out of everybody, not 48th in 3A — but they didn’t make the playoffs. Their season ended with a loss to Carson in the conference tournament, so they’ll enter this season with a chip on their young shoulders.

“Last year was just so crazy,” West head coach Ashley Poole said. “No preseason and we couldn’t ever get things quite back to normal. But our girls played hard and they usually played well. Now we’re just hoping for a nice, normal season.”

West relied on five freshmen to do the scoring last winter. When you do that, you’re supposed to go 0-14, but West went 10-4.

Three losses were to 3A state champion Carson, so West was 10-1 against everyone else.

Now those fabulous freshman should be even better as sensational sophomores.

“They’re still really young and they make me want to pull my hair out at times, but it’s a very fun group to coach,” Poole said. “They go fast and they go hard and they’re fun to watch.”

Most West fans didn’t get to see them last year, so that part of the equation will be different this season. Fans in the stands could make the Falcons even more lively.

“I believe they’ve all gotten better individually in the last year,” Poole said. “We did quite a bit in the offseason and preseason to try to give them opportunities to improve their skills.”

Guard De’Mya Phifer reminds Poole and a lot of people of former West standout Khaila Hall. She’s extra quick and is a slashing driver. She’s hard to stay in front of, and it’s hard not to foul her when she makes up her mind to get to the basket. She scored in double figures nine times and averaged 10.4 points per game.

“She’s been working on her outside shot, and with improvement there, she becomes really tough to guard,” Poole said.

Phifer had a big freshman season, but still wasn’t the leading scorer. That was Lauren Arnold, who had a pair of 21-point outings and hit double figures 11 times. Arnold averaged 12.4 points with a nice mix of inside and outside production.

“She’s a basketball player and does whatever we need,” Poole said. “She can shoot and she hits the boards.”

Emma Clarke, who also shines in volleyball and softball at West, is an active, mobile and agile 6-footer who get steals, deflections and rebounds. She’s been working on her jumper between softball games and volleyball matches.

“We don’t really see her until basketball season, but she stepped right on the court last week and hasn’t lost a thing,” Poole said. “It looked like she’d been playing basketball all year.”

Clarke scored in double figures eight times as a freshman with a high of 16 points.

Mya Edwards is an undersized, blue-collar forward who does a lot of what Poole calls “the grunt work” for the Falcons.

Edwards averaged 6.4 points and scored 14 when the Falcons needed it in a close win against Statesville.

Makalah Tenor works hard on defense and chipped in with 6.4 points per game.

Cuthbertson is athletic and had 10 key points in a 56-54 win against Statesville. Durham is a hard-nosed scrapper who can make an impact on defense.

West will have two seniors. Melani McDonald is a returner who didn’t play a lot last season. Mia Arntsen hasn’t played basketball in a while, but the volleyball player wanted to make a comeback as a senior.

“She’s been a surprise,” Poole said. “She’s brought a ton of energy.”

Juniors Shatayan Page and Eva Rankin-Matthews are newcomers to the program.

Page is new to the school. Rankin-Matthews has been at West and decided to play this season.

“They’re working, and they’re going to contribute,” said Poole, who has coached West in exactly 200 games.

West hasn’t had a losing season since 2013-14. Poole has coached more wins than anyone in program history, one more than Toni Wheeler.

With a 127-73 record, Poole is eighth on the county’s all-time wins list for girls basketball.

West has had games in which 10 different players scored. At the very least, this transition season should be a winning season.

“We know there are going to be bumps in the road,” Poole said. “But this group of kids is eager to learn. If they pick up on a few things, they’ll surprise some people.”