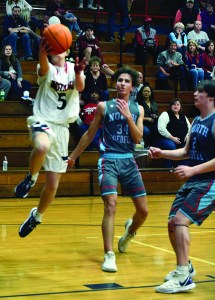 “It was a game we had control of, but we had some mental mistakes in the last minute and a half,” East head coach Andrew Porter said. “We put them on the foul line too much and didn’t get enough stops.”

East surged late in the first half to take a 41-31 lead and was still up 57-53 going to the fourth quarter.

But the Tigers scored 32  in the fourth quarter.

Jadon Carnes had 30 points for Mount Pleasant, while Brady Duke had 24.

“It’s a tough loss,” Porter said. “Both teams played very hard, and for the most part, we played very well.”

East is scheduled to play at Central Davidson next Tuesday.

East’s varsity girls did not play.