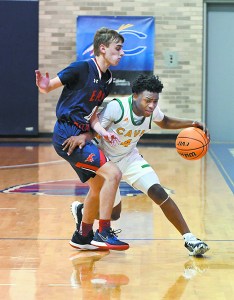 A number of North players were only a few days removed from the football field.

“We played hard and played inspired,” North Rowan head coach Jason Causby said. “We just didn’t execute correctly, and that’s a result of not having enough reps together in the gym.”

Amir Alexander and Quashawn Carpenter made two 3-pointers each as the Cavaliers jumped out to a 14-5 lead after a quarter.

The Cougars made seven free throws in the second quarter and cut the deficit to 26-21 at the break.

“Carson didn’t run away and hide,” Causby said. “They continued to swing back at us, no matter the circumstances.”

Derrick Hansen had nine of his 12 points in the third quarter, as North moved out to a 44-35 lead. Carpenter made another 3-pointer in the quarter.

North was only 5-for-12 on free throws in the fourth quarter, but George Maxwell went 3-for-4 and helped North finish off the win.

“Typical first game,” Causby said. “Ugly and foul-plagued. The good thing is everything we didn’t do well is correctable through film work and practice.”

Tristen McBride scored six in the fourth quarter for the Cougars.

Emory Taylor, Carson’s leading returning scorer, was shut out in the first half but scored 11 in the second half.