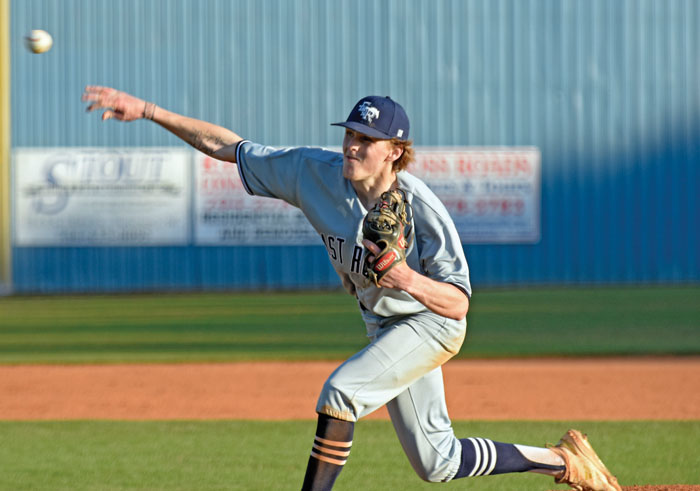 East Rowan’s Cameron Padgett, who plans to play at UNC next year, will be a strong arm for the Mustangs. File photo by Wayne Hinshaw, for the Salisbury Post

GRANITE QUARRY  — About 100 friends, family, teammates and former teammates pulled themselves away from Cam Newton and the NFL long enough on Sunday afternoon to watch the other Cam sign with the University of North Carolina’s baseball program.

East Rowan pitcher Cam Padgett signed on stage in the school auditorium with light blue and white balloons fluttering around him, and with coaches singing his praises. Friends came from as far away as Laurinburg to support him, which is a good sign that he’s been an ideal teammate.

With a sprinkling of tattoos, longish blond hair and a 6-foot-4, thin-waisted frame that’s crying out for a few cheeseburgers, he looks more like a free-spirited rock star than the prototype All-American boy, but the 17-year-old can really pitch. He can pitch for anyone. UNC and a lot of other schools recognized that.

There are missile-throwers who have to figure out how to pitch, and some never can.

That’s not Padgett. He’s been a pitcher as far back as anyone can remember.

His velocity has come gradually. It’s still not mind-blowing for such a big-time recruit, but it’s coming. He’s a consistent 89 mph guy now, and as pounds and strength are added in the UNC weight room and training table, he’ll add some more zip.

He’s never had a formal pitching lesson, but he’s listened to knowledgeable coaches. He’s learned. He can locate three different pitches in his sleep.

“Cam was really good when he was 8,” said former East Rowan head coach Brian Hightower, who coached Padgett as a youth player. “Even when he was 8, you knew he’d have a signing day. But as good as he was, he stayed humble. I always preached team first, 24/7, and he bought into that concept early.”

When Padgett was 11, a Hightower-coached East Rowan team beat the best from Florida and Georgia and won the Southeast Regional.

“I guess I knew when I was 10 or 12 that I was better at baseball than most kids were,” Padgett said. “But I wasn’t a hard thrower. Now I do have pretty good velocity, but it’s a huge advantage for me that I learned to pitch without it.”

Jump forward to the summer of 2018, when the South Charlotte Panthers, the area’s premier showcase program, experimented with the youngest group of area kids they’d ever coached.

South Charlotte went 7-0 in the WWBA Freshman World Championships. Padgett turned in three dominant outings and was the tournament’s pitching MVP. He was throwing 80, but he was getting out some of the nation’s best in that age group. In the championship game, Padgett fanned eight, with no walks.

“A lot of guys that age, when they’re facing elite hitters, they try to throw harder and they’ll over-throw,” Padgett said. “But I had full confidence in three pitches. I commanded three pitches and could throw them for a strike in any count. So I could just be myself on the mound. I think that’s what separated me.”

That performance made Padgett a national phenom. He was ranked No. 1 in the country for a while. Before he’d ever thrown a pitch for the Mustangs, the University of Virginia and Virginia Tech had reached out with scholarship offers.

“I knew then that the dream of pitching in college was going to be a reality,” Padgett said. “But UNC always was the dream school. I’d grown up going to UNC basketball and football games.”

When UNC joined the recruiting struggle for Padgett later, he was overjoyed and thankful. A visit to the Chapel Hill campus only cemented what he already knew. That was where he wanted to be. He gave a verbal commitment to the Tar Heels early in his junior year.

Rowan County has contributed quite a bit to UNC baseball in recent years. Padgett is just the latest.

East Rowan infielder Ike Freeman shined for the Tar Heels and was a draft pick. Austin Love (West Rowan) was last season’s pitching ace and a third-round draft pick in 2021. Vance Honeycutt (Salisbury) might be the fastest player on the UNC roster as a freshman. He had a fantastic fall season and could be a starting outfielder this spring.

While Padgett’s sophomore season at East was limited by COVID to one win and one save —with 15 strikeouts and zero walks — his junior season was one for the history books.

He was 5-0 in the condensed season and was the Patrick Snider Memorial Award winner as the Rowan County Pitcher of the Year. Among other things, he struck out 48 in 34 innings, while walking two. His ERA was 0.62.

“He was dominant all season,” East head coach Brett Hatley said. “He pitches with a bulldog mentality and is a tremendous competitor who never wants to come out of a game. And he’s got everything is in his bag. He can throw three different pitches for strikes and he’ll throw them in any count.”

The most memorable Padgett game of 2021 for Hatley was the 1-0 win against Carson. He needed only 75 pitches in that shutout of a very good team. He threw 65 strikes.

While he’ll be a pitcher at UNC, he’s been a capable offensive player for East as a corner infielder. He batted .372 last season.

“He was a really good No. 2 hitter for us,” Hatley said. “He could slash, bunt, hit and run, whatever we asked him to do.”

Padgett is an athlete who was successful as East’s football quarterback in 2020. He was a strong contributor to East varsity basketball for three seasons.

But as a senior he’s focusing on the weight room and on baseball.

He tweaked his shoulder in late July pitching for South Charlotte Panthers. He knew something was off when a pitch sailed on him.

Surgery wasn’t needed. He’s been rehabbing the shoulder. He’s confident he’ll be 100% in a few weeks and is looking forward to what should be a tremendous 2022 baseball season in Rowan County. Four stout Rowan teams are crammed into the South Piedmont Conference.

West Rowan and Carson are going to be very good, while the East Rowan-South Rowan games could be games for the ages.

In addition to Padgett, East boasts N.C. State commit Chance Mako, a 6-foot-5 junior who throws 93 and was the pitching MVP for the 2021 WWBA World Underclass Championships.

It’s a 1-2 punch that will make East formidable in every conference game and in every playoff game.

“One thing about Cam is that he can pitch big in the big-time games,” Hightower said. He had that ability when he was 8, and he still has it.”