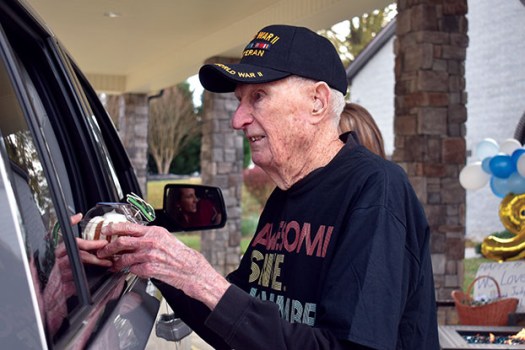 Jim Deal receives a bundt cake from a visiting friend. A small picture of a tank is attached to the cake, referencing Deal's time spent as a tank gunner during World War II. Ben Stansell/Salisbury Post 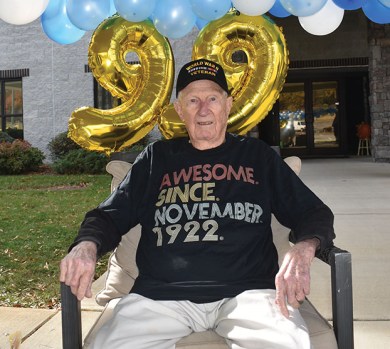 Although he's seated in the picture, Jim Deal didn't do much sitting at his drive thru birthday party. Deal received well wishes from a non-stop procession of friends. Ben Stansell/Salisbury Post 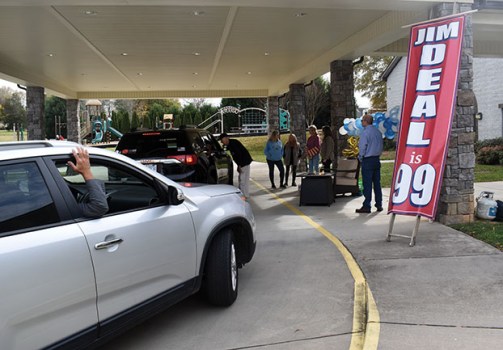 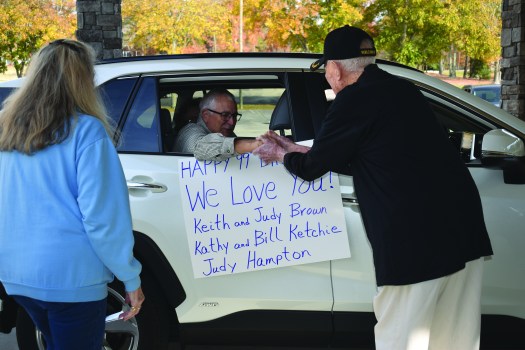 A friend who brought a poster to the party reaches out to shake Jim Deal's hand. Ben Stansell/Salisbury Post 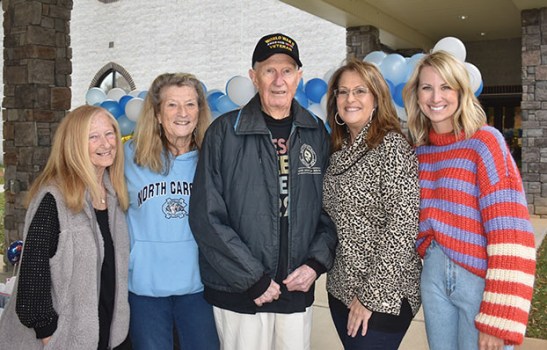 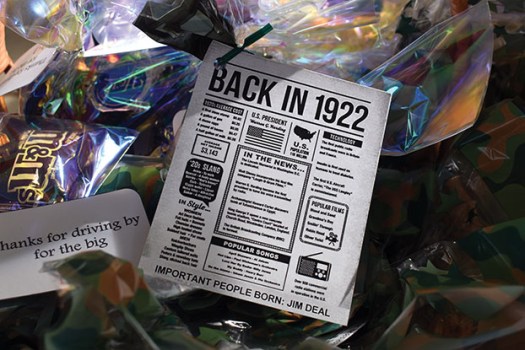 Attached to the goodie bags handed out to guests at Deal's party were little cards filled with facts from the year 1922, which is when he was born. Ben Stansell/Salisbury Post

FAITH — After celebrating his 99th birthday with family on Friday, Jim Deal wasn’t expecting Sunday to be anything out of the ordinary.

He was in for a surprise.

Deal was treated to a drive-thru birthday party on Sunday afternoon. Standing under the awning behind Shiloh Reformed Church, Deal received a procession of family and friends, each pulling next to him in their cars to wish him a happy belated birthday. The spry nonagenarian rarely sat during the two hours, greeting each car full of smiling faces with an enthusiastic wave of the hand.

You wouldn’t know it watching the party, but the World War II veteran is still carrying stray pieces of shrapnel in his legs. Deal, raised in a large family on a farm in Woodleaf, was drafted into the U.S. Army as an 18-year-old in 1942. He was sent to Fort Bragg, where he boarded a cross-country train to Fort Lewis in Washington.

When the group of young soldiers disembarked the train after five days and four nights, they weren’t greeted with a glowing welcome.

“(The commanding officer) looked at us and said, ‘Good God almighty, look what they brought us to make soldiers out of,’” Deal said.

Deal was part of a group of young men from North Carolina, Georgia and Alabama called on to compose the 737th Tank Battalion. The troops trained for about a year in Washington and the Oregon desert for what they would face in the European theater. Deal learned what it would take to be a tank gunner.

Deal and the battalion eventually traveled to Massachusetts and set sail across the Atlantic Ocean. They landed in England about three months before the D-Day invasion of France. While in France, Deal was assigned to one of the few tanks with a 105mm Howitzer mounted on top. Deal was thankful for the appointment because the weapon was fired from long distances and, therefore, his tank was set back from the front lines.

“I feel like the Lord took care of me,” Deal said.

The Lord looked after him again, Deal said, when a piece of shrapnel traveled down his tank’s periscope one day and almost left him blind. It barely missed. It wouldn’t be the only close call Deal experienced during the war.

Deal and the battalion pushed on through France and into Central Europe, fighting in the infamous Battle of the Bulge along the way. After spending more than a 100 days in combat with his battalion, Deal’s campaign was cut short when he stepped out of his tank and onto a landmine.

The injury landed him in a hospital in England, where he recovered while learning to walk again with a cane. Deal was sent back across the Atlantic, learning the war had been won while he was at sea. Deal said he is proud of the role his battalion played in the war.

After returning to Rowan County, Deal worked for Southern Railway for more than 30 years. In his retirement, Deal has become a fixture at local veterans events. He returned to Europe in 2019 for the 75th anniversary of D-Day, accompanied by his granddaughter Jordan Waller on the two-week trip.

Jordan Waller was part of the crew who organized the surprise drive-thru party on Saturday, along with Deal’s three daughters, Melissa Waller, Reba Drennan and Paula Hill. The family hosted a drive-thru party for Deal last year, but it was held at his home. This year’s celebration allowed for a bit more personal interaction.

People who pulled through for the party made signs, blew horns and dropped off presents for Deal. Each visitor got their own goodie bag to take home too, featuring an information card listing major events that happened in the year 1922 when Deal was born.

One of Deal’s friends who came to see him was 8-year-old Bennett Clark. Interested in all things military, Bennett became pen pals with Deal a couple years ago. The two have written back and forth and have video called each other to talk about tanks. Bennett met Deal for the first time in person at his drive-thru party last year, and was back this year to bring him bundt cakes and well wishes.

Melissa Waller has already started thinking about next year’s party for Deal’s 100th birthday. The plan is to host a more traditional gathering if COVID-19 concerns abate. The sign, made by Harwood Signs, will be amended to say 100 instead of 99.

Deal comes from a “family of longevity.” Almost all of his 11 older siblings lived to be in their late 90s. Deal lives in the Faith area near his granddaughter Jordan and daughter Melissa.