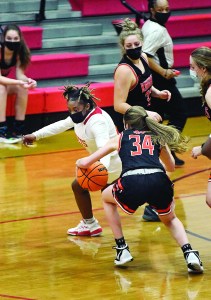 North Davidson’s Emily Hege (34) scored 39 to lead the Black Knights to a win against South Rowan. Photo by Wayne Hinshaw, for the Salisbury Post.

North Davidson began the game on a 16-0 run and led all the way.

North Davidson was in control 42-16 at halftime.

“Slow start,” South coach Alex Allen said. “They’ve built a very solid team and we just couldn’t get anything to fall early. The looks were there, but the shots didn’t fall.”

“We had some first-game jitters, but we’ll shake that off and we’ll be improved in our next one,” Allen said.

That will come Wednesday when the Raiders take on Pine Lake Prep.