Ask Us: Do police departments in Rowan County have vacancies? 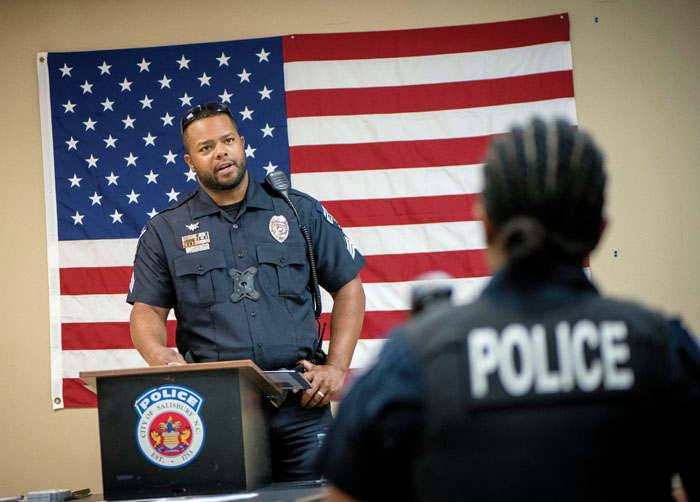 While many law enforcement agencies find themselves in need of new recruits, police departments in Rockwell, Landis, Cleveland and Granite Quarry may be exceptions to the trend.

In Rockwell, Police Chief Hugh Bost says there aren’t any vacant, full-time jobs. In Landis, Public Safety Director Zachary Lechette is in a position police chiefs prefer: more qualified applicants than open positions. Cleveland Police Chief Jon Jessop says all five of his full-time positions are filled and that he was able to fill the fifth position this year when it was added in the town’s budget.

The answers come in response to a reader question about police department vacancies following news stories about shortages in the town of Spencer, which has lost about one-third of its officers. Spencer Police Chief Mike James also has announced his retirement at the end of the month.

While Rockwell’s stable situation is due to a lack of vacancies among its seven full-time positions, Bost acknowledged it can be difficult for small towns to recruit officers when larger, nearby departments such as Salisbury and Kannapolis are also in need of new officers. Like other police chiefs who spoke to the Post, Bost emphasized small town departments provide personal interaction with citizens and a lower call volume.

Lechette said Landis has one opening at the moment and one upcoming vacancy. He suspects Landis’ public safety model, which fused the police and fire departments into a joint operation, is a contributing factor to having more applicants than vacancies. The model allows firefighters to become certified as law enforcement officers and cover police shifts and vice versa.

“We have a little broader of an audience,” he said.

Bost and Lechette also cited support from their town’s governing body — new equipment, facilities or raises — as being important to good staffing levels.

The Granite Quarry-Faith Joint Police Authority is in a similar situation to Landis, Rockwell and Cleveland. Chief Mark Cook says he has nine full-time officers and one position that was frozen in the previous budget cycle. Cook says he’s experienced the same issues most agencies have in trying to recruit new officers, but had some luck in recent history.

“We actively reach out to BLET graduates and spend a large amount of time talking to potential candidates to apply,” Cook said. “Approaching potential candidates one-on-one and talking with them about what we offer seems to work well. Fortunately, we have experienced a very low turnover rate during the last 10 years.”

Cook said Town Manager Larry Smith has developed a new pay structure for all employees, which will benefit police officers, too. The new structure will allow Granite Quarry to stay competitive with peer towns. He mentioned benefits that include added pay for certifications and degrees, a take-home car program, paid membership to the Police Benevolent Association and tuition assistance for associate’s and bachelor’s degrees.

In East Spencer, Police Chief John Feuell says one of the department’s eight full-time positions is vacant. There are also three part-time vacancies, he said.

While that seems small, the vacancies have a major effect in a department like East Spencer. One vacancy can require schedule changes or extra duty for other officers in the department, Feuell said.

“Law enforcement has become one of those positions where people aren’t as interested as they used to be,” he said.

In Kannapolis, the police department has 89 sworn officers, eight of whom are in the process of being hired or completing training. There are seven vacancies. In an emailed statement, Communications Director Annette Privette Keller said Kannapolis is like other police departments and companies.

“Staff is always needed,” she said. “The city is using traditional and non-traditional media marketing/in-person recruiting at community colleges, colleges, HBCU colleges, military, community events and so forth. The city is also relaunching an effort to recruit high school students to the Public Safety Cadet Program, which works to encourage students to consider a career in law enforcement.”

China Grove Police Chief Andrew Deal says he has one opening at the moment, but “we’re maintaining.” He’s not too worried about filling it. Applications may just take a little longer.

“It used to be that as soon as you had an opening you’d have three or four applications. Now, it takes two weeks to get three or four,” Deal said.

The Salisbury Police Department has 83 sworn officer positions budgeted and 11 vacancies as of Nov. 15, said Police Chief Jerry Stokes. He’s advocated for increases in police compensation and fringe benefits as a tool to recruit more officers.