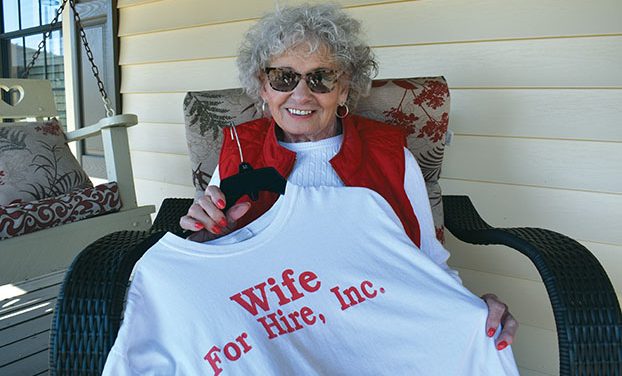 Sheila Cannon started Wife For Hire cleaning company in 1985 after being inspired by a movie with a similar title. The business grew over the years, adding more than 100 clients. Ben Stansell/Salisbury Post

In fact, he hated it.

“My daddy was so upset with me,” Cannon said. “He wouldn’t talk to me for about three or four months. He said, ‘I can’t believe what you named that business.’”

Cannon’s controversial branding epiphany came one night when she was at home with her husband, Homer, watching a made-for-TV movie about a housewife who launches a successful cleaning business. The 1985 movie, “This Wife for Hire,” struck a chord with Cannon. She had been plotting a return to residential cleaning and the film gave her the inspiration she needed.

“When that movie went off, I told my husband, ‘That’s the name,’” Cannon said.

“We started getting so many houses because the name just went crazy,” Cannon said. “When the name went so wild, I think people just wanted to know who was brave enough or stupid enough to chose the name Wife For Hire.”

The name might’ve been the bait, but it was the quality of cleaning that sustained Wife For Hire for decades. After owning the company for 35 years, Cannon retired from the business a few months ago. 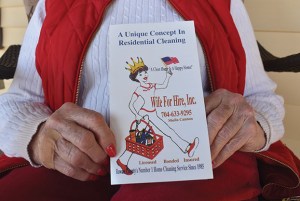 Wife For Hire’s “Queen of Clean” logo was drawn by founder Sheila Cannon’s daughter, Dawna. The logo was part of an eye and ear catching marketing strategy. Ben Stansell/Salisbury Post

Wife For Hire wasn’t Cannon’s first foray into the cleaning business. A Lexington native, Cannon started cleaning houses around the Davidson County city when she was 16 years old, a young mother looking for a source of income.

“I needed the money to help raise my children,” Cannon said. “That was the only thing I could do at my age. I was cleaning house and babysitting this woman’s two little boys for $8 a week.”

She needed the additional income even more after her first husband died when her daughter, Dawna, was 7 and her son, Scott, was 3. Cannon took on a second job at a cotton mill, cleaning houses in the morning and then clocking in for second shift. Cannon found the cleaning business to be more profitable, and relied on it to raise her two children.

Cannon eventually remarried in 1984 and moved with Homer to his home in Rowan County.

Cannon was pondering her next career move when she and Homer stumbled across “This Wife for Hire” on television that fateful night. When Cannon first launched the business, she was its sole employee, cleaning every house. She was also the person who fielded phone calls for the business, hearing from pranksters or genuinely confused men who were looking for a different kind of business.

“I have had calls where just about everything you could imagine was said,” Cannon said. “We just laughed it off and kept on going.”

There were serious inquiries too. So many that Cannon had to hire more help.

At one time, Cannon had keys to 96 homes in Rowan County and 166 clients who she cleaned for on a monthly or weekly basis. She kept a crew of about eight cleaners, divided into a couple units.

Homer even chipped in, pressure washing homes and cleaning second story windows — a husband for hire. Almost all of Cannon’s members became a part of the business as well, at least for some time.

Every Wife For Hire worker wore white tennis shoes, red or white pants, a Wife For Hire shirt and a bright red wife for hire jacket.

“What color better stands out than red?” Cannon said. 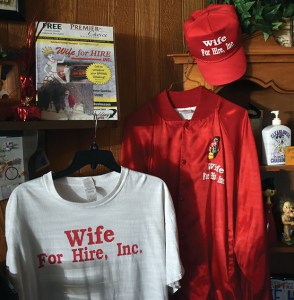 Cannon and her employees traveled to clean homes across the county in a 15-person passenger bus or in her large white Chevrolet Suburban, dotted on the side with advertising magnets. Cannon downsized vehicles in 2013, trading in the large SUV for a much smaller Kia Soul covered from front to back in the Wife For Hire logo. The Soul was, of course, red.

“Everywhere I went, people looked at that car,” Cannon said.

Cannon attributes the company’s success to her smart marketing, but credits her employees even more.

“I have been so proud of it and so proud of the girls, because without them, I couldn’t have done all of this,” Cannon said. “I really appreciate them and love all of them, each one of them, because they’re good girls. The fact is that we built our reputation on goodness and trust and honesty.”

“I love all the customers,” Moose said. “You get to know everybody around you and you learn about them and they become your family instead of your friends.”

It helped to have a good boss, Moose said.

“(Cannon) is the best person in the world,” Moose said. “She’s been there for me through a lot.”

Moose is one of several employees who have been with Wife For Hire for more than a decade. Several have stayed on even after Cannon sold the company. Its new owners will continue to use its well-known name and logo.

Wife For Hire might not be her’s anymore, but Cannon will continue to relish in the company she created.

“Nobody will take away what I built …” Cannon said. “I am so proud of it for what we accomplished.”

Her father, Arvil Burkhart, was proud of Wife For Hire as well.