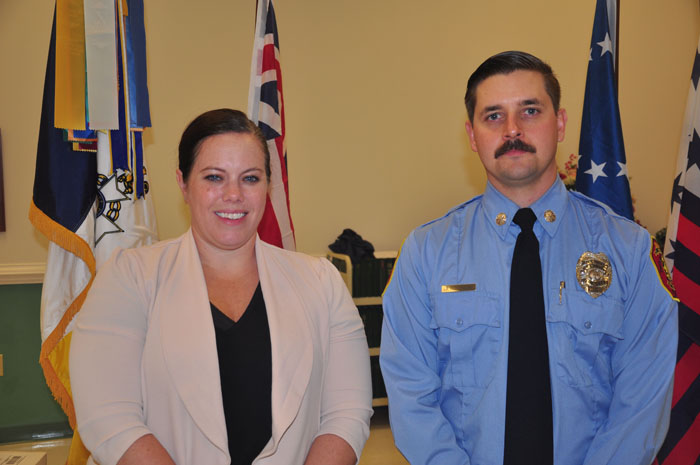 SALISBURY — The Salisbury Chapter of the NC Sons of the American Revolution honored public servants and veterans at its chapter meeting on Nov. 11.

Salisbury Police Cpl. Meredith Walker was awarded the Law Enforcement Commendation Medal by the chapter for her work as a detective and as the AFT Task force officer. In these capacities, she has been instrumental in helping solve several difficult homicide, robbery and other violent crime cases. She also liaisons with both the county district attorney and U.S. attorney. Her efforts to effectively prosecute serious violent gun crime offenders help make the city safer for all citizens. In all cases she exhibits professionalism and effectiveness.

Salisbury Fire Engineer Jacob Vodochodski was awarded the SAR Heroism Award for his efforts in two rescue incidents at the Yadkin River bridge. In an 18-month span Vodochodski responded with his unit to two traffic incidents at the I-85 Yadkin River bridge. Both occurred at night and involved the rescue of a victim who had gone over the bridge rail to the river bank below. In both cases, Vodochodski rappelled over the side of the bridge to reach the victim. He then analyzed the situation, stabilized the victim, prepared for lift and then assisted with the lift back to the road to an awaiting EMS unit. Both victims survived their injuries thanks to Vodochodski’s medical and rescue skills.

Vodochodski was also awarded the Fire Service Commendation medal for his efforts to help establish and train a technical rescue unit with the fire service.

Other awards and recognitions included Sandra Czuba, Regent of the Elizabeth Maxwell Steele DAR in Salisbury for her assistance with several new member applications.  Chapter Color Guard Commander, Terry Holt, received the SAR 250th Anniversary Gold Medal for his activities related to the upcoming Sestercentennial of the US, and Boyd Morgan was inducted into the SAR Veteran Corps in recognition of his service in the U.S. Air Force.

The National Society of the Sons of the American Revolution is a non-profit, non-partisan organization dedicated to promoting patriotism, preserving American history and teaching American history to future generations. Membership is dependent on having an ancestor that assisted with the cause of Independence from the British Crown.