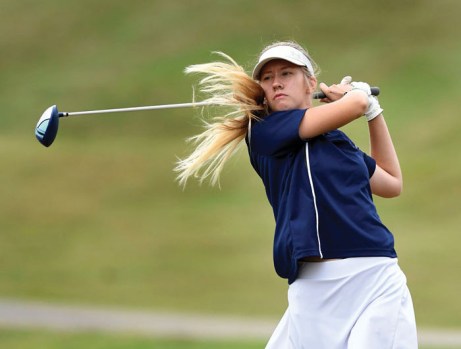 East Rowan's Hannah Waddell repeats as county golfer of the year. File photo by Wayne Hinshaw, for the Salisbury Post 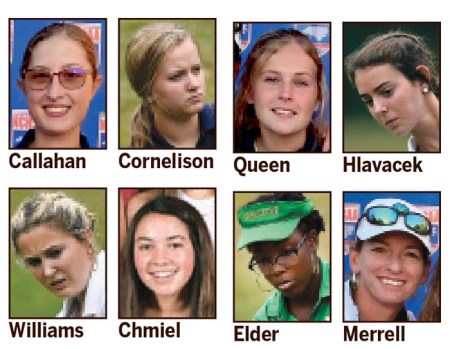 There’s a firm determination about her that made her a freshman starter for East Rowan’s varsity basketball team last winter.

But it’s possible basketball may be only her second sport by the time she finishes high school. Waddell is making impressive strides in the golf world. Basketball had a five-year head start, but golf is catching up.

“I started playing basketball in second grade and didn’t take up golf until the seventh grade,” Waddell said. “I enjoy the team aspects of basketball, but I like golf because it pulls me into focus as an individual.”

Waddell made a switch from softball to golf in middle school.

She recently finished her sophomore golf season with two county championships and two conference championships on her list of accomplishments.

“I didn’t know about the softball, but I’m really glad we’ve got her out on the golf course,” East golf coach Tinsley Merrell said with a laugh. “I started seeing her out at Warrior a lot between her eighth-grade year at Erwin and her freshman year at East.”

Waddell made a jump in golf partly because during the tighest COVID restrictions, golf was the only sport she could pursue.

She was expected to be East’s No. 4 player as a freshman when the delayed season finally got rolling last spring, but she worked her way up to No. 1.

Waddell has had little in the way of formal lessons, but she picks things up her own. She tries different things and figures out what works for her.

“She’s got some natural ability for the sport, some very good instincts,” Merrell said. “She doesn’t use a range finder. She just has a feel for how far she needs to hit it.”

Merrell said putting is the area where Waddell probably has the most room to improve. She consistently hits accurate irons. She drives low, but long.

“Her drives are lower than you might expect, but the ball shoots out of there like a rocket,” Merrell said. “She keeps it in play most of the time, and even if she gets in trouble, she knows how to get out of it.”

Besides having physical ability, Waddell has the right temperament for golf. She’s never too high or too low. A shaky hole doesn’t linger. She starts fresh on the next tee box. She might follow a double bogey with a birdie.

“She’s a sweet kid, just a really good egg,” Merrell said. “But at the same time, she’s a competitor.”

In the Rowan County Championships held at Corbin Hills, Waddell shot a smooth 76 to win by 15 strokes over teammate Emma Callahan. Waddell led East to its fifth straight county championship.

East was runner-up during the South Piedmont Conference regular season to Lake Norman Charter, but the Mustangs won the conference tournament.

Lake Norman Charter and Northwest Cabarrus had strong golfers, but Waddell was medalist for the majority of the league matches.

Late in the season, the Mustangs pulled off a surprise by winning the 3A West Regional at Glen Oaks. That was the Mustangs’ most impressive team achievement. Waddell scrambled to an 86 at Glen Oaks, while Callahan also shot 86.

East advanced from the regional to the 3A State Championships and finished fourth there. Waddell shot 82-86 — 168 on the challenging Grey Course at Foxfire and tied for seventh individually.

That was a nice jump for her, a sign that the best is yet to come. In the single-round state tournament her freshman year, she shot 93 at Beacon Ridge and tied for 18th.

This summer when Waddell traveled for basketball tournaments to Kentucky and Indiana, her golf clubs went along.

That said a lot about how important golf is becoming for her.

“Even a long way from home, I could find a way to at least get to a driving range,” Waddell said. “I really enjoy golf and I’ve got a little streak going as far as winning county and conference. That’s a streak I’d like to keep going.”

While it was a banner season for Merrell, Waddell and the Mustangs, Salisbury reached some goals for coach Alex Weant.

Salisbury won the Central Carolina Conference. Salisbury’s Sydney Hlavacek was CCC Player of the Year and played in the 1A/2 State Championships as an individual.

(Based on top finishers in county tournament at Corbin Hills)