High school basketball: Carson boys should be much improved 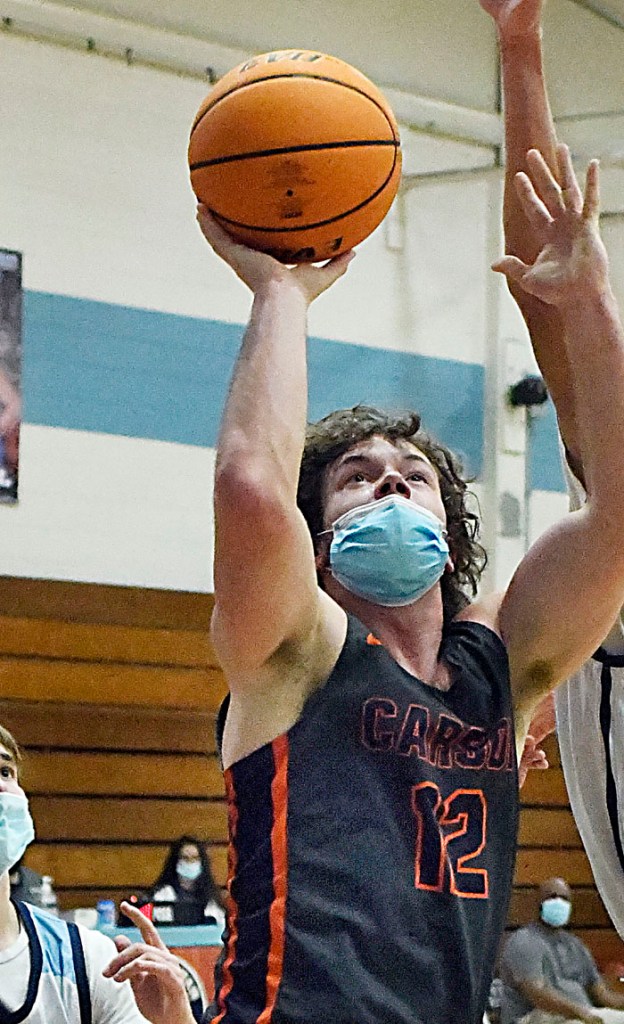 Carson's Garrison Collins, a senior, is hard to move once he gets position. File photo by Wayne Hinshaw, for the Salisbury Post

Fifth in a series of reports on local basketball teams …

CHINA GROVE— Carson’s boys were expected to struggle last winter — and lived up to that prediction.

Sophomore-heavy and guard-heavy, the Cougars suffered through brutal blowout losses against the best teams they played — West Rowan, North Iredell and Davie.

The Cougars were fortunate seniors AJ Merriman and Brodie Johnson came out of “retirement” to help out. Carson managed to win two on the scoreboard and added a third win late in the season by forfeit.

The good news is that by the end of last season, the Cougars were much better than when they began. Now with five of the top seven scorers back, they’re relatively loaded compared to last season’s green roster.

“We’re a lot more experienced, so we should be better and we should handle adversity better and handle situations better,” said Brian Perry, the former Catawba player who is the only head coach the Cougars have had since the doors opened. “These guys have worked their butts off to improve. We’ve had a good preseason. The players have bought into everything we’ve been selling.”

It will start for the Cougars with athletic junior guard Emory Taylor, who was the squad’s leading scorer with 13.3 points per game and made the All-Rowan County team. Taylor scored 20-plus three times.

Senior forward Hunter Burris, who had an outstanding fall as the football team’s quarterback, scored in 12 of Carson’s 13 games and is a scrapper.

“He’s relentless and tough and he rebounds very well for his size,” Perry said.

Junior Jay Howard is coming back from a concussion suffered during his strong football season as a receiver/returner. He’s got ideal length and speed and has a high hoops ceiling. He scored in double digits six times as a sophomore.

“He runs like a deer and he’s an active offensive rebounder,” Perry said. “Defensively, he creates a lot of deflections with his length and athleticism.”

Senior Garrison Collins is a rugged, muscular post man. He’s hard to move once he gets position. He had a 14-point game against Statesville last season.

Junior Cam Burleyson, the baseball team’s catcher, missed his sophomore basketball season while he recovered from “Tommy John” elbow surgery and will be a big addition.

“He’s a heady player who can shoot,” Perry said. “He helps us in a lot of ways.”

Junior Casey Crawford, a 6-foot-4 lefty, is best known as a baseball prospect, but he’ll make a contribution to the hoops program.

“He hasn’t played that much basketball, but he has the potential to be a big rebounder for us,” Perry said.

Freshman guard Colin Ball has impressed Perry in the preseason with his shooting and defense and could make an impact right away.

Tristen McBride didn’t play a lot last season as a varsity freshman, but he’s ready for a larger role. He’s a 6-foot-2, 265-pound post man who shined on the football field.

Sophomore Bryson Bare, another football player, may split time between varsity and jayvee, but he’ll give the Cougars another big body.

“We’ve got more posts than we’ve had in some time,” Perry said. “We’re hoping McBride and Bare can be a two-headed monster.”

Junior center Daniel Epley and junior guard CJ Guida are expected to add depth to a team that should be competitive and fun to watch.

“”We’re deeper, we’re bigger, and we expect to shoot it better and handle it better,” Perry said. “We’re excited to see what we can do.”