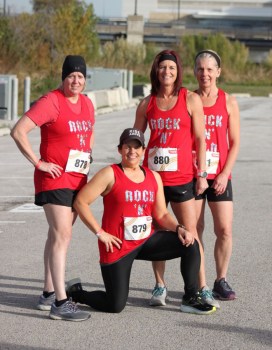 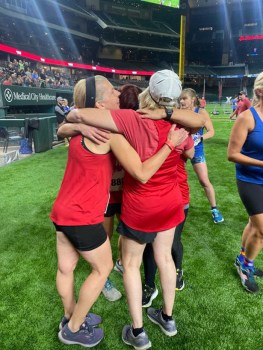 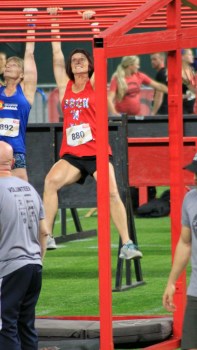 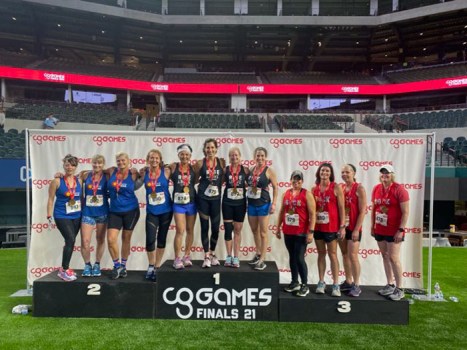 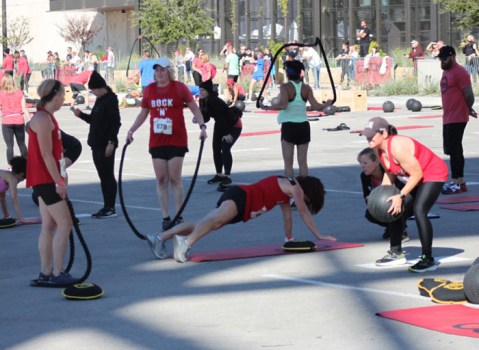 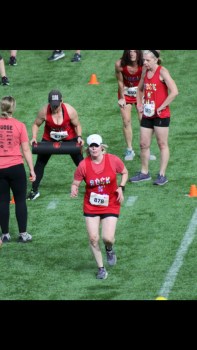 Sometimes regular folks can do special things, especially if they can motivate each other. Synergy has miraculous ability to get more from a group of individuals than they might achieve themselves. Here’s the story.

Lisa Fink, 54, lived in Austin, Texas for a few years and began training with Camp Gladiator while there. When she moved back to the China Grove area, she started her own CG program here that encourages fitness for a supportive and caring group.

Miriam Lowery, 53, was an accomplished high school athlete in several sports and has been a runner most of her life. As a physical therapist, Miriam knows the importance of maintaining strength and mobility.

Donna Stallings, 53, came to exercise and running later in her life, starting in her early 40s. Donna says she would have never been considered athletic, but said she got to a point that she wasn’t happy with her weight and wanted to do something about it.

Ellen Howard, 53 is a long-time athlete who started looking for other challenges than just running. Boot camp workouts have agreed with her body. She is a school counselor and coach.

Fink, Lowery and Howard were athletes at South Rowan High School (class of 86), playing a mixture of sports that included basketball, softball, track, cross country and tennis. They competed in Junior Olympics and made trips to Baton Rouge, Seattle and Nebraska. These trips were wonderful opportunities to see new places and enjoy their time together as friends.

Before joining Camp Gladiator in Texas, Fink had major health issues including obesity and a silent heart attack. She said, “If you know me, I’m competitive in almost everything I do. I tend to turn everything into competing. Six months later, I was running in front of the pack, down to near my ideal weight.”

Fink became a personal trainer and started CG camps here in Rowan. She encouraged her high school friends and Stallings to compete in the national games. Fink said, “Even though this was our first year and we didn’t exactly know what we were facing, we all love challenges. We took the challenge and went after it. We trained at camp and outside of camp.”

The team placed second in the local Charlotte competition this past July, qualifying them to advance to CG Games Finals on November 13th. CG Games included an Opening round, Semi-Finals and then the Super Finals, held in Arlington, Texas, the home of the Texas Rangers baseball team.

The opening round consisted of four different events including broad jumps, burpees, crab walks, frog jumps, rucksack carries and plus various sprints and agility and strength relays. They had to place in the top six to continue the competition and finished a solid third place in that round.

The Super Finals included sprints, balance beams, wall climbs, burpees and so much more. The local team, affectionately titled “Rock N Old”, finished in third place nationally in the 50 and over division. They had competed for ten hours with little rest between competitions.

Lowery added, “There was not much rest between events which was very challenging. Many times, I did not think I could push myself again but found a way because I didn’t want to let my team down.”

All four women agreed that they enjoyed the time together. Lowery said, “Each person had their strong points and we used that to achieve the final outcome.”

Howard added, “Sport again took me to a new place to enjoy the competition with friends.”

We all were a little sore and some of us had a few bruises. We definitely stiffened up on the plane home. I would do it all again.”

Fink said, “Who would have guessed at ages 53 and 54 that we would still be competing together? Camp Gladiator is a fun and challenging total body workout dedicated to changing lives.”

Salisbury’s biggest 5K is set for Thanksgiving Day at The Forum. Look for more info on it and several other upcoming races at www.salisburyrowanrunners.org