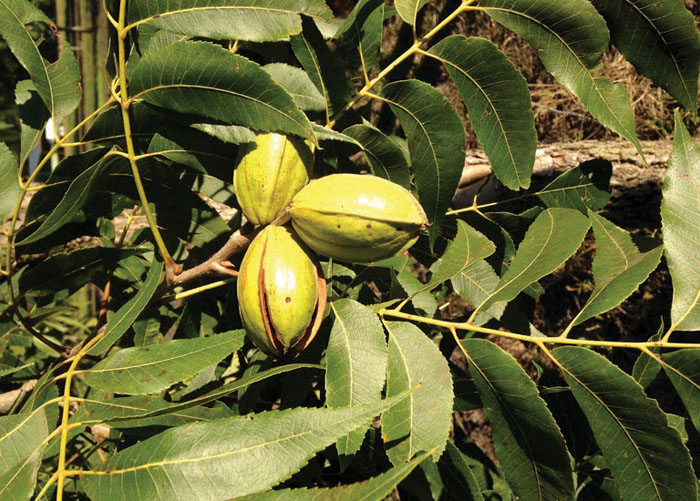 Harvesting pecans can be a challenge for those who live in the Piedmont. My family farm has four gigantic trees planted in the ’40s that produce massive crops some years and other years virtually none.

There are a number of factors for lack of pecan production: fertilization, exposure, poor pollination, insects and diseases and weather. The most common issue is poor pollination. Pecan flowers are monecious (male and female bore on separate flowers). These bloom at different times, sometimes weeks apart. The male flower is mature, but the female is still immature and not ready to pollinate. A freeze, sudden massive rainfall, etc. cause pollination issues. Insects and diseases also play a factor.

Pecan scab fungus and insects destroy many fruits during early growth. There is no realistic pesticidal control because of size and cost. It’s best to rake and burn leaves in the fall and winter to destroy fungi and insect pupa or eggs to lessen damage.

Pecans need zinc and there is a fertilizer formulated just for pecans. Have a soil test done because zinc does not leach out of the soil and can be a problem if too much is applied.

Pecans can be biennial bearers; one season there is a bumper crop, the next season may be lighter because of lack of food storage. In other words, the tree used up all the food for next season’s crop. So, when you contend with these factors, plus unusual changes in weather, pecans are not the easiest to produce each year. The tree itself is cast iron as I’ve never seen a pecan tree die from insects or diseases.