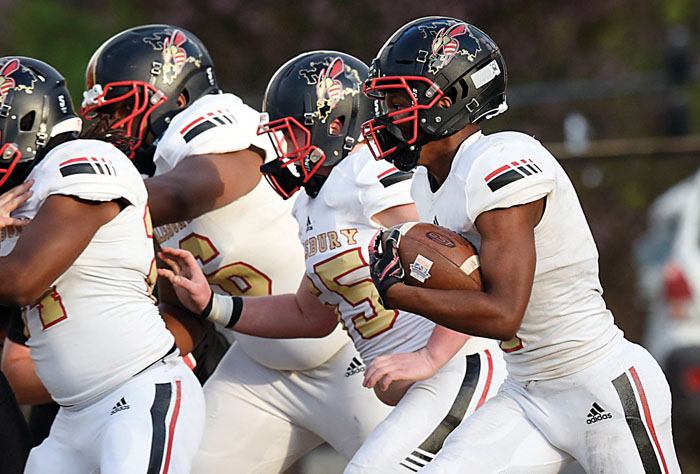 Third-seeded Maiden ruled for three quarters and handled sixth-seeded Salisbury 32-20 at chilly Thomas Brown Stadium on Friday in the third round of the 2A state playoffs.

Despite the seeds, most experts expected the Hornets, 6-0 in road playoff games the past two seasons, to win the battle of unbeaten teams.

But Salisbury had an 18-game winning streak, dating back to last spring, ended by the inspired Blue Devils. Maiden (13-0) avenged the 52-12 beating the Hornets administered in last season’s first round.

Maybe last spring’s overwhelming result made the Hornets overconfident. Maybe a season in which Salisbury never trailed and never faced serious adversity until Friday finally caught up with them.

Prior to making the voyage to Maiden, Salisbury (11-1) enjoyed a totally dominant season — 10 running-clock victories, including two in the playoffs. But Maiden was the better team in the rematch.

When the teams clashed last spring, Salisbury’s pass rush devoured Maiden’s offensive line, but Maiden was able to protect dynamic quarterback Ethan Rhodes this time, and Rhodes and 6-foot-3 receiver Chris Culliver wrecked a Hornets’ defense which previously had been impervious. Rhodes was 14-for-21 for 277 yards through the air with five touchdown passes. Culliver caught four of them.

Rhodes has thrown 40 touchdown passes this season, with only four picks, while Culliver has 23 touchdown catches, so they’ve done it to everyone. They just weren’t supposed to be able to do it against Salisbury.

Maiden made a statement early.  Salisbury’s offense was on the field first and gained 1 yard on three plays before punting.

Rhodes’ 53-yard touchdown pass to Culliver made it 7-0, four minutes into the game, and the Hornets trailed for the first time this season.

Early in the second quarter, Maiden went up 13-0 on a Rhodes-to-Culliver pass play that covered 24 yards. Jalon Walker blocked the PAT.

Maiden maintained that advantage until the break.

Maiden’s first possession of the second half may have been the most critical of the game. The Blue Devils had to start it on their 10-yard line.

Rhodes passed for 20 yards to Jacob Sigmon before Ben Gibbs broke a run to midfield.  Rhodes threw a 37-yard TD pass to Culliver for a 19-7 lead, and being able to move 90 yards against the Hornets in two minutes had to fill Maiden with confidence. Walker blocked another PAT, but the Blue Devils were in control.

JyMikaah Wells had a 20-yard run for the Hornets as they tried to answer, but they bogged down near midfield and had to punt. Now they were in serious trouble.

Rhodes found Culliver for another long gain, and the Blue Devils finished another drive when Rhodes passed to Hall for a 10-yard score. That made it 25-7.

Maiden got a fourth-down stop near midfield, and after a 48-yard gallop by Gibbs, Rhodes and Culliver did it again. Culliver’s fourth touchdown grab came in the final minute of the third quarter, and it was 32-7.

Salisbury failed on an onside kick, but got a quick stop and scored again on Geter’s 14-yard pass to Marcus Cook. That made it 32-20 with 4:17 remaining in the game. The Hornets went for two to try to get within 10, but Geter’s pass was batted down in the end zone.

Maiden made a first down and used up nearly two minutes, but Salisbury’s defense forced a fumble with 2:22 left to keep hope alive. Salisbury quickly advanced to midfield with a Geter-to-Cook pass, but that was the last gasp. An unsportmanlike penalty pushed the Hornets back. On fourth-and-long, Geter was sacked.

Maiden was able to go into victory formation and took a knee on the last few snaps, as the home fans celebrated.

Maiden racked up 371 yards of offense, with Culliver making 10 catches for 205 yards.

Geter threw for 117 yards, ran for 53 and accounted for three more touchdowns. The sophomore finished a remarkable season with 28 rushing touchdowns and 17 passing TDs.

Cook’s TD catch was his seventh of the season.  The Hornets’ all-time leader in career receiving yards, he had 103 more on Friday.

Next for Maiden is a road trip to second-seeded East Surry. East Surry edged Monroe 10-9.