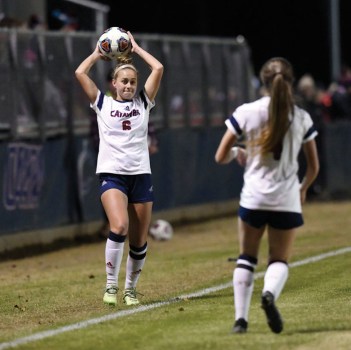 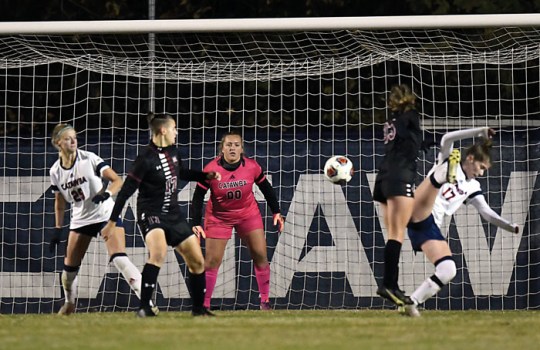 Loose ball in front of the LR goal with Catawba's keeper Jamie Kazenmayer 00 in the center.. Catawba's Kasey Hahn 17 making the stop. photo by Wayne Hinshaw, for the Salisbury Post 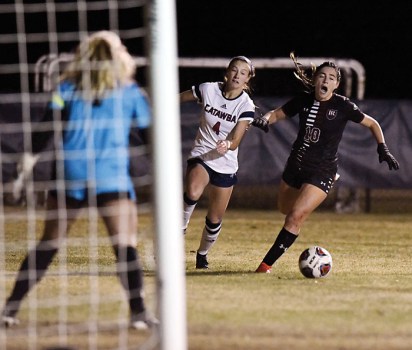 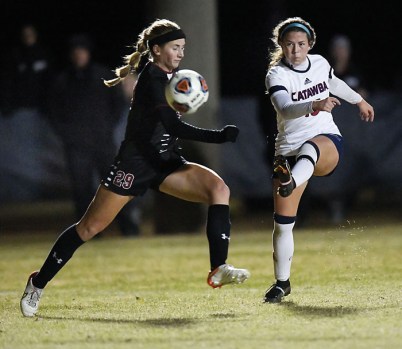 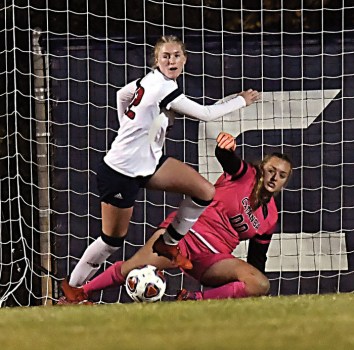 SALISBURY  —  There’s no column in the standings for moral victories, but that’s all the Catawba women’s soccer team could claim Friday night.

In a match that was a testament to tenacity, the Lady Indians suffered a first-round knockout in the NCAA Division II playoffs — falling to visiting Lenoir-Rhyne in a round of penalty kicks.

“Disappointing result,” seventh-year coach Nick Brown said after 10th-ranked Catawba battled L-R to a scoreless tie after two halves and two overtime periods, then was outscored 3-1 in the ensuing shootout. “Obviously, you want to get the win. But at the same time you look at the big picture and see everything our team has done this year. They set almost every record there is to set. And technically, they’re still undefeated. How many teams can say that at the end of the year?”

Catawba officially closes up shop with an 18-0-3 record, though Lenior-Rhyne (11-5-3) — the No. 7 seed in this Southeast Region — advanced to Sunday’s semifinal against Queens at the Frock Soccer Complex. The Bears were outshot 16-8 and played the final 9:48 with only 10 players, yet prevailed in a spellbinding finish.

“I just feel an enormous amount of pride for the way my team performed tonight, from start to finish,” said winning coach Gary Higgins. “We played a very good team that hadn’t lost all season. Sometimes you just have to be tactically disciplined and keep your shape and defend. We did all of that very well.”

So did No. 2 seed Catawba, which yielded only five goals in regulation and overtime and boasted the nation’s stingiest goals-against-average this season. Senior keeper Jamie Kazenmayer made five saves and was credited with the team’s 16th shutout, but failed to thwart three of four

penalty kicks in the decisive shootout.

“We were ready for whatever they threw at us,” Kazenmayer said. “I was prepared for moments like those, but it’s really just by chance. I was trying to read their bodies as best I could. It didn’t end the way we wanted, it’s very upsetting, but we did the best we could.”

The teams traded jabs and hooks for 110 minutes before Lenoir-Rhyne’s Madi Kyle, Stephanie Figueiredo and Kate Casey scored on PK’s. Hannah Dunn answered for Catawba, but teammates Katie Beck and Sydney Jimmo were foiled. The outcome was cemented when L-R keeper Grayson Cameron made a diving stop on a blistering shot by sophomore Helen Summerell.

“It comes from practicing, over and over again,” Cameron said after recording five saves. “You never know when a game’s going to go to PK’s. You just have to be ready.”

Both squads had chances to win in regulation. Midfielder Sharon Mayes gave Catawba’s shivering home crowd a thrill early in the second half when she attacked from the right side and rifled a low shot that Cameron swallowed at the near post. Moments later, Summerell launched a 20-yard blast that the senior netminder deflected over the crossbar.

“We just couldn’t find the back of the net,” Mayes said after unleashing a game-high six shots. “They were sitting back on us, just waiting to see what we were doing. That made it hard offensively to get in close. Still, we were getting balls into the box, just not to the net.”

Kazenmayer made a similar stop on L-R’s Neve Duston, steering a 30-yard drive from the left side over her crossbar with 16:25 remaining in the second half. The Bears squandered a pair of golden opportunities in the final minute of regulation, when Leonie Proessl  nearly converted a one-timer from point-blank range. Seconds later, Proessl’s grounder from a sharp angle skipped wide left of the cage.

“They did a lot of shooting from a distance — and we just tried to get in front of those,” said all-SAC defender Beck. “But in the second half, they got off a few better shots. They were quick out wide, but I think we did a good job defensively, midfield to the back line. We were able to keep a clean sheet.”

Catawba held a 6-1 shooting edge in the two 10-minute, sudden-death overtime periods. Dunn had a pair of lovely chances rejected in the first OT. Then in  the second, Proessl was shown her second yellow card and sent to the sideline, forcing the Bears to play a man down. But other than a loud Summerell shot that Cameron muzzled with 6:30 on the clock, the Indians hardly threatened.

“They definitely came out with a different style of play,” Brown said. “They sat in, which we’ve now seen a lot of teams do against us. They set up differently and crowded the box. You’ll hear people say they ‘parked the bus,’ putting everybody in front of the goal. That’s something we take as a compliment.”

It set the stage for a dramatic conclusion in the shootout, where Catawba lost for the fourth time in four tries since the program began in 1990.

“We had some chances, but that’s the cruel game that we play,” Brown said afterward. “It’s iffy at that point. We practice PK’s every day. But their goalkeeper made a couple of really good saves and that’s the difference.”

“We were just talking in the (post-game) huddle, how sometimes the better team doesn’t come away with the win,” added Mayes. “So we’re gonna take this and feel it for next year.”

Perhaps Beck said it best when she offered, “We had an incredible season, a record-breaking season. Technically, we didn’t lose. So having an undefeated season in college soccer is an incredible accomplishment. There’s a lot to be proud of here.”

NOTES: Dunn led the Indians and the SAC with 17 goals and 39 points this season. Jimmo (27 points) and Summerell (25) were second and third. … Catawba’s Kasey Hahn was given a yellow card in the first overtime period. …  Catawba won the South Atlantic  Conference regular season and tournament championship. Brown was named the conference’s coach of the year. … The Indians defeated L-R 2-0 in a regular-season match on Oct. 6. … Third-seeded Queens (16-4-1) advanced with a 2-1 victory over North Georgia. Gametime Sunday is 2 p.m.