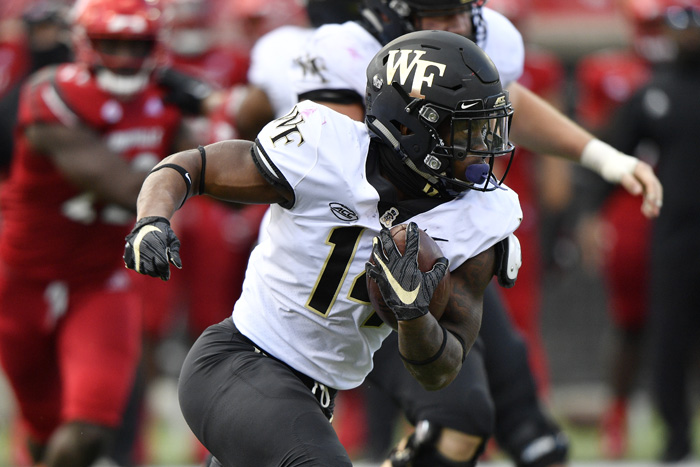 Wake Forest running back Justice Ellison (14) will need to be productive against the stingy Clemson defense. ACC Pool/File Photo

CLEMSON, S.C. — No. 13 Wake Forest has a huge final step if it hopes to end Clemson’s reign atop the Atlantic Coast Conference: end its 12-game losing streak to the Tigers.

The Demon Deacons (9-1, 6-0 ACC) can win the ACC Atlantic with a victory Saturday at Clemson. Something Wake Forest hasn’t been able to do since getting a win against the Tigers (7-3, 5-2) in 2008. The Demon Deacons last win at Death Valley was decade earlier than that, coming in 1998.

“It’s not really a surprise that they’re in the position that they’re in, still in the talk with the ACC,” Wake Forest linebacker Luke Masterson said. “We kind of knew that we’re going to have to go through Clemson if we’re going” to win the division.”

Wake Forest can reach its first ACC title game since 2006 even with a setback against Clemson. The Demon Deacons could still clinch a berth with a win at Boston College in their regular-season finale.

Clemson coach Dabo Swinney said his team’s goal is to keep its title hopes alive during  what has been and inconsistent and unexpected season. the Tigers have won the last six ACC titles and reached the College Football Playoff each season from 2015 through 2020.

Only one of Wake Forest’s defeats during its Clemson losing streak was single digits, a 31-28 loss on a last-second field goal in 2011 that wrapped up the Tigers trip to the ACC championship game. Clemson went on to win the first of seven league titles under Swinney.

At the ACC’s preseason football gathering last July, Wake Forest coach Dave Clawson hoped the Clemson came would be a battle for the division. He got his wish.

“They’ve been the best team in the ACC,” Clawson said. “So it would be obviously a huge win for our program if we can find a way.”

With running back Christian Beal-Smith sporting a boot on his foot in missing the N.C. State game, Justice Ellison carried the load and had a three-touchdown game. Ellison ran for 57 yards on 17 carries with two touchdowns, including a critical one with 1:47 left to make it a two-possession game. The Demon Deacons will need more production there to ease the load on quarterback Sam Hartman, who was off-target (20 for 47) against the Wolfpack despite his four TD passes.

Clemson linebacker James Skalski was an end of the bench player the last time the Tigers lost at home in November 2016. The Tigers have won 33 straight at Death Valley, the longest such streak in the country. The sixth-year defender looks to close out his career with another perfect season at home.

“It would be pretty cool to go out with the longest win streak at home,” he said. “And keep it going, not only for my class, but for next year and the year after that.”

Wake Forest’s defense has been a question mark since October, including allowing 56 points in a win against Army and 58 points in their lone loss to North Carolina in a game designated as a non-conference matchup. That unit allowed 42 points last weekend, though the Demon Deacons had three takeaways and held the Wolfpack to 3 of 14 on third downs.

Wake Forest entered last weekend down starting cornerbacks Gavin Holmes and Caelen Carson, while Clawson said Tuesday that cornerback Ja’Sir Taylor was also in question up until gametime. Then receiver Jaquarii Roberson exited early in a game that saw both team having players repeatedly going down to injuries.

Clawson didn’t go into details on injuries, saying the team would get some players back from injuries but “probably won’t get others.” Clemson will also be without its leading receiver in Justyn Ross, out with a foot injury that Swinney said will require surgery.

The Tigers have been one of the best defenses in the country, leading the ACC in points allowed and 11th nationally in yards given up. Coordinator Brent Venables understands the challenge they’ll face in Sam Hartman and the Wake Forest offense. The Demon Deacons “long, slow mesh point” on handoffs will put Clemson’s defense in conflict better than any opponent it had seen all year.

North Carolina’s quick success in Mack Brown’s second tenure has come with Sam Howell at the helm of high-scoring offenses. The Tar Heels could get an extended look Saturday at how things will look without him.

The Tar Heels host Wofford from the Championship Subdivision on Saturday, a one-week break from Atlantic Coast Conference play before visiting 25th-ranked rival North Carolina State in next week’s finale. There are 22 players set to participate in Senior Day farewell ceremonies – a list that includes Howell, a junior and top NFL prospect – as the Tar Heels try to become bowl eligible in their final home game.

And it’s unclear whether Howell will be ready to play due to an upper-body injury suffered in last week’s loss to No. 20 Pittsburgh, with Brown saying he’s a gametime decision.

“We’ll see how it is come Saturday,” Howell said. “But it’s something I’m putting a lot of time into. I really want to get out there as soon as possible, get back out there with my team.”

Brown has said in preseason that the team was treating this year as though it would be the last for Howell before jumping to the NFL, then said Monday that this would in fact be Howell’s final home game. Howell was mum about his future a day later, saying he was focused on finishing strong and that “there’s still a lot of decisions to be made.”

“He’s been the face of the program for three years,” Brown said.

If Howell can’t play, sophomore Jacolby Criswell or freshman Drake Maye would start for the Tar Heels (5-5). If he does, Criswell and Maye could get valuable reps for the future if the Tar Heels manage to build a comfortable lead against the Terriers (1-9).

“You would love to get both of them some time because they’re our future,” Brown said. “They’ll be competing in the spring for the job. And this is a great opportunity for both of them to show what they can do.”

Wofford won consecutive Southern Conference championships and reached the NCAA FCS playoffs in 2018 and 2019 to open Conklin’s tenure. Things have been tougher since.

Wofford went 1-4 in a truncated season postponed to spring at the FCS level by the COVID-19 pandemic, and went winless (0-8) in Southern Confernce play for the first time in school history. A loss Saturday will give the Terriers their lowest full-season win total since going 1-10 in 1987.

“It’s an anomaly in terms of what we’ve had to go through this year in 2021,” Conklin said. “There’s no doubt that it’s going to be different moving forward. We’ll get older, we’ll get stronger. At a place like Wofford, that’s what you have to be.”

Wofford has lost 21 straight against FBS teams since beating Louisiana-Monroe in 2000. The Terriers have scored more than 14 points in only four of those games.

The 22 UNC players participating in Senior Day ceremonies include top offensive guard Joshua Ezeudu, a fourth-year junior. Brown said some players on the list are still mulling options but “wanted to go through Senior Day just in case” they don’t return.

Anxious for a win, Syracuse travels to No. 25 NC State

Syracuse is one victory shy of reaching bowl eligibility as the Orange finish the season with a pair of games against ranked teams.  First is a matchup at No. 25 North Carolina State (7-3, 4-2 Atlantic Coast Conference) on Saturday, and the Orange (5-5, 2-4) are coming off their worst performance of the season. Louisville beat them 41-3 last week and held Syracuse’s potent run game to nearly 100 yards below its average.

The setback came after a week off.

“The bye week can be a trap,” Orange redshirt senior defensive end Josh Black said. “Having that game element on a week-to-week basis is very critical for keeping up your speed, your performance, your intensity. I thought we were really caught off-guard on really how fast the game was able to move.”

The Orange will face a defense that leads the ACC against the run, allowing just over 100 yards per game. Syracuse is the conference rushing leader, averaging 236.7, and tailback Sean Tucker is ranked second nationally with an average of 136.2.

“We have to go back to our playmakers being able to make these plays,” Black said. “We’ve got to make sure we take it to them, make sure we dictate to them.”

NC State missed its chance to take control of the Atlantic Division race, losing last week at No. 13 Wake Forest  in a matchup of the division’s top two teams.

NC State, 12-2 all-time against Syracuse and 6-1 at home, must win out to have any chance of claiming the division if the Demon Deacons lose their last two games.

The Wolfpack finish at home against rival North Carolina.

“I’m not going to wish ill will for anybody,” Wolfpack coach Dave Doeren said. “I’m going to cheer for us. And cheering for us means we want everyone to lose that needs to lose. I have to focus on what we control on this side of it.

“Lord knows, we’ve had enough bad luck throughout the years. It would be great to have a little good luck down the stretch here.”

N.C. State has a chance to finish with 10 wins for only the second time in program history.