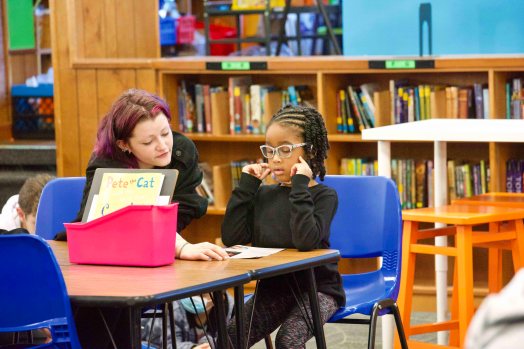 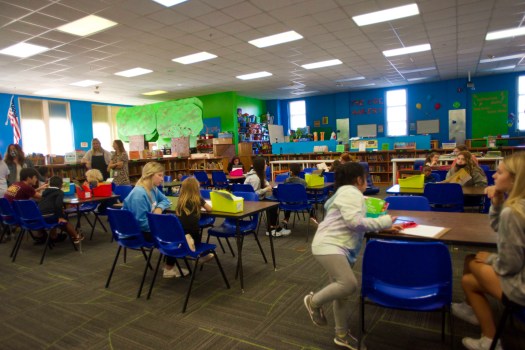 Carl Blankenship/Salisbury Post - The book buddy program brings together a class of high school juniors and a class of kindergartners.

CHINA GROVE – For about 40 minutes on Thursday, kindergartners and high school juniors shared the library at China Grove Elementary School.

The group is a pairing of two classes in the school as “book buddies.” The high school students come to the elementary school once every month to spend some time reading with younger kids.

Kindergarten teacher Sarah Safrit said the kids each get boxes of books, and it’s a two-way street. High schoolers read to the kindergartners and vice versa.

“It’s a great way to get our kids talking about the books and love of learning,” Safrit said.

Kindergartner Ashtyn Dayden said she was excited for the session.

“Reading is fun,” she said.

Dayden was reading “Brown Bear, Brown Bear, What Do You See?” on Thursday. Dayden said she has learned to read more since she started kindergarten. Her favorite book is “I Want to be a Ballerina.”

Safrit said there is a dramatic change between the reading abilities of the kindergartners from the beginning of the school year to the end. At the start of the year, most kids are still distinguishing between pictures and text, holding books properly and reading in the correct direction.

“At the end of the year, they transition to reading the words, the pictures and being able to talk about books and what they read,” Safrit said, adding the change is exciting.

Safrit said she thinks it is good for kids to see they will never stop reading when they interact with the older students. For the high schoolers, it is a good opportunity for them to be positive role models.

Madilyn Cherry, a South Rowan junior, said she had not been back to an elementary school since she attended until the classes started being book buddies.

“Getting to come back and see kids as young as I used to be and getting to do the things I used to do with them and teach them, it feels like a really good opportunity to be with my community,” Cherry said.

She said it was hard to imagine that she used to be a kindergartner, but she sees herself in the kindergartners as she interacts with them.

“We also try to talk to them about life and what they do in school,” Cherry said. “That way they can just interact with us and see what it’s like talking to older people.”

South Rowan High English teacher Alex Allen said she and Safrit set up a pen pal program between previous classes. She hopes the kids can come read at the high school at some point, and she plans to attend their kindergarten graduation.

For the high school students, Allen said it gives them the chance to build their communication skills and connections with kids that might be going to their high school some day.

“We’ve had countless conversations on language and word choice and how it’s going to be a little different,” Allen said, adding a goal is for the high schoolers to be a bright spot in the kids’ days.