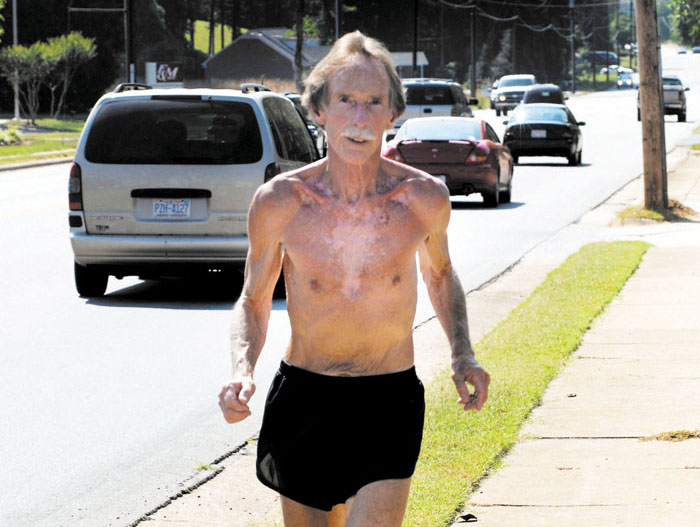 SALISBURY — Whether the sun was scorching the pavement or the air was cold enough for snowflakes to form, Richard Kelly could be found blazing a path down the Statesville Boulevard sidewalk, headed toward downtown Salisbury.

“I don’t care how hot, how cold, whether it rained, whether it snowed, Richard Kelly was determined to run,” said Jane Kelly, his second wife of eight years. “It was almost like an obsession with him.”

As soon as he got home from work every afternoon, Richard would change into his black shorts, lace up his shoes and take off his shirt. He’d trot out of his Milford Knoll neighborhood to log his daily quota, which alternated between 6 and 10 miles. If Richard missed a run, it was because he was bedridden with sickness, or undergoing some sort of medical operation.

“It had to be a real, real good reason,” Jane said.

Running the same route at the same time almost every day, Richard became a fixture of the Salisbury community — a friendly face and shirtless torso that people got used to seeing on their commute home from work. Even to complete strangers, he was familiar.

“We would go places and people would say, ‘I have seen you run since I was a child,’” Jane said. “Or somebody would say, ‘I know who you are. You’re the running man.’”

Richard Kelly, Salisbury’s running man, died at the age of 74 last week. His life was celebrated by friends and family on Sunday at Landmark Church.

Long before Richard was a man of faith who ran more than a half-dozen miles per day, he was a man in bad physical and mental shape.

A Salisbury native, Richard graduated from Boyden High School (now Salisbury High) and served in the U.S. Marine Corps. He came back to his hometown and married his first wife, Sandy. The two remained married for 31 years until Sandy died from a brain tumor in 1999.

As a young man, Richard fell in with the wrong crowd. He started drinking, developed a drug habit and smoked up to three packs of cigarettes a day. His waistline expanded to 42 inches and he ballooned to well over 200 pounds.

Richard’s unhealthy lifestyle reached a breaking point on the night his second son, Michael, was born in 1979.

“He knew his life had to change and when he went home that night, he prayed and said, ‘If there is a God, please help me. Please change my life and give me purpose,’” Jane said. “He said the next morning when he got up, he knew he was going to start running.”

And he followed through. Richard went to Knox Middle School that afternoon and tried to stride around the track. He didn’t get very far. The unhealthy habits had taken a toll on his physical shape, and Richard struggled to run even a fraction of a mile.

That didn’t stop him from going back and giving it another shot.

One mile became 2 and turned into 3. Eventually, Richard built his endurance to the point where he could run 10 miles at a time. As his stamina improved, so did the other aspects of his life. He kicked his nicotine habit and started shedding excess weight, dropping more than 100 pounds.

Not previously a religious man, Richard also joined the congregation at Landmark Church.

“His life after that point was truly a life of service to God,” said David Whisenant, who lived next door to Richard for over a decade and remained his close friend until Richard’s death. “That’s what he was about. He was a role model when it came to Christian living.”

Richard taught Sunday school at Landmark, was co-chair of the board of deacons and guided the church’s finance committee.

In front of the church’s congregation, Richard spoke about his transformation and used his experience to highlight both the power of God and the power of daily exercise.

It made sense then that David Freeze, one of Rowan County’s most prominent endurance athletes, became acquainted with Richard. But the two didn’t share the road during many local races. Freeze said that Richard wasn’t focused on Turkey Trots or 5Ks.

“He was just an everyday guy running his route at his time.” Freeze said.

Richard was so dogged about his running schedule for fear that he’d slip back into his unhealthy ways. For motivation, he even held on to the oversized jeans he once wore.

“Whenever someone would ask (Richard) why he ran so much, he’d say it was because fat Richard was chasing him,” Whisenant said.

Richard would run a pair of shoes ragged every six months.

“He was religious about his running,” Robinson said.

One time, Freeze and fellow runner Dan Roseman decided to join Richard on one of his daily jogs. They wore the same short black shorts Richard always had on and peeled off their shirts to mimic his trademark look.

“There was a construction guy who evidently had seen (Richard) about everyday for a long time and it really threw him for a loop,” Freeze said. “He hollered, ‘Hey, Richard.’ Then he said, ‘Wait a minute, which one of you is Richard?’ It was really funny. We laughed about that for a while.”

The bare-chested, mustachioed trio made the front page of the Salisbury Post the next day.

A few days after the run, Richard sent Freeze and Roseman a framed copy of the article. It was a gesture that Richard made quite often.

“If there was anybody at church or in the neighborhood that went to school, and maybe they were in the paper for being a star athlete or something, Richard would cut that out, laminate it and frame it and deliver it to them,” Jane said. “I cannot begin to tell you how many frames we have bought.”

Whisenant said he still has at least five framed stories from Richard in addition to several cassette tapes Richard made of Sunday school lessons he delivered.

Whether it was articles or recordings, Richard was known for his little gifts.

“He would make, and I guess we would go to jail for this, but he would make copies of children’s movies and every week he would have a route and he would take those kids movies, drive around and put them in mailboxes,” Jane said. “He was always, always coming up with things, and I guess that’s why everybody loved him.”

Richard was loved by many of the city of Salisbury employees he worked with for almost four decades.

Dave Treme, who served as Salisbury’s city manager for 25 years, first met Richard around 1985. The two quickly became friends, bonding over their shared faith and interest in running. They prayed together often, Treme said, and oftentimes found themselves saying prayers for the city’s employees, who Richard was tasked with keeping safe as the city’s director of risk management.

“There may have been some risk managers who were as good as Richard Kelly, but I did not see any better than him,” Treme said.

Richard earned a bachelor’s degree from Appalachian State while working full-time for the city. He also became a licensed insurance adjuster and a certified odor smeller, to sniff out unusual and potentially dangerous scents in asphalt and other substances.

“He was the ultimate professional and he worked incredibly hard,” Treme said.

Treme and Richard continued to be friends after Treme moved on from the city of Salisbury in 2011. Richard retired four years later, in 2015, and was honored with a key to the city. The city also named a safety award after Richard, which is still given out to this day.

In his retirement, Richard had the opportunity to fully explore his love of antique automobiles and motorcycles. The crown jewel of his collection was a 1932 Ford hot rod painted bright yellow. The car, driven by a friend of Richard’s, followed the hearse that carried Richard on Sunday to his final resting place at City Memorial Park.

Richard is survived by his two sons, Michael and Rick, his sister, Donna Roddy, brother-in-law, Will Pleasants and grandson, Bart Kelly, and his beloved dog, Cody Boy.