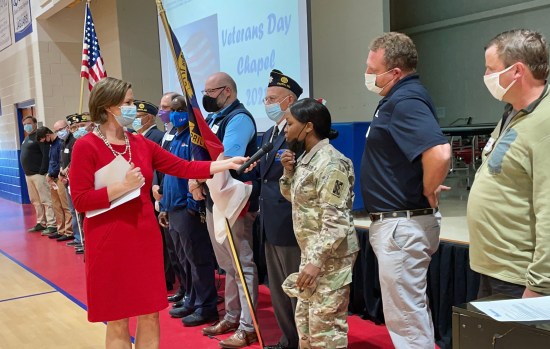 Photo submitted - Parent and active Army service memberLaKrystal Burgess sharing her name and branch of service at the end of the program. 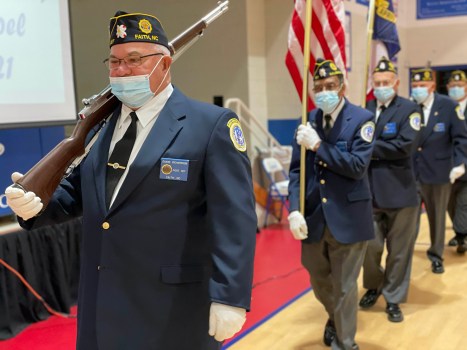 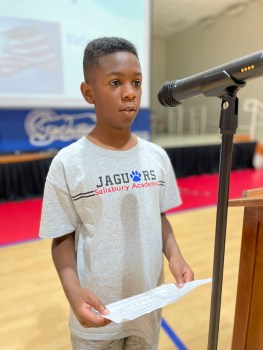 SALISBURY – Salisbury Academy holds its weekly chapel programs every Thursday, but last week was special: it was Veterans Day.

Academy Director of Marketing and Communications Lizzy Roy said the school tried to keep the elements of typical chapel programs such as community speakers and speaking opportunities for students, but it was all filmed and compiled.

Last week’s program opened with the Rowan County Veterans Honor Guard presenting the colors and a rendition of “The Star-Spangled Banner” by fourth graders.

Fifth grade students spoke, and the school recognized its alumni who are active service members.

Brannon Williams, a retired Army Ranger, spoke to students about the virtue they are focusing on this month: gratitude. He talked to them about the meaning of Veterans Day and sacrifices of people who serve in the military.

The program closed with Head of School Beverly Fowler asking people who served to come to the front of the school’s gym. Each received the chance to share their names and branch of service.

“We are grateful for our veterans, and the opportunity to say thank you in person means the world to our students and our entire school community,” Fowler said.

Parent and Army veteran Peter Schupp said he believes the school does a good job with the program and having it in person this year made it special.

“You see veterans come from all walks of life and I think that was well represented at the program,” Schupp said, noting there was a mix of male, female, active duty military and retired veterans who attended.

“It gives the kids something to look up to,” Schupp said. “Not necessarily hero worship, but there may be somebody who feels strongly about going into military service and can see people in my community have done it and go on to do other things.”

Fourth grader Blakely Gantt was part of the group that sang. Her first year at the school was last year, and there was no singing. She said it was a bit nerve-wracking to perform, but it was fun.

“I was thinking about the sacrifices that people made and gave their lives for us to live the lives we do now,” Gantt said about the program.

Roy said there were other activities throughout the week to celebrate the occasion. Students made cards for veterans and reflected on the day through art.